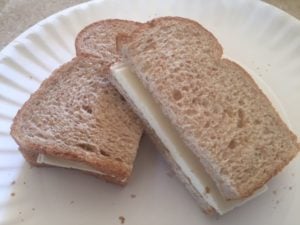 The School Committee is moving closer to approving a new policy that will end the “cold cheese sandwich” policy that was enacted in 2011 after lots of debate and some chiding from parents.

For the record, it was never called the cold cheese sandwich policy, but it quickly became known as such when the School Committee approved the policy, which limited a child who’s lunch account was in arrears to a “cheese sandwich, fruit, and milk.”

Under the new policy, which will be back before the School Committee Dec. 19, a student without money on account for lunch (or breakfast) will receive the designated hot meal of the day and milk, with no a la carte items.

The cold cheese sandwich policy was put in place to address total school district meal debts of more than $3,000 at the time. Most students pay for their meals drawing on accounts (MySchoolBucks.com) filled by their parents. If parents neglect to refill their child’s account, the child usually doesn’t know it until after she has picked out her lunch and is at the cashier. The cashier is the one deputized with the job of telling the child there’s no money in the account. The tray of chosen food is taken away, substituted by the cheese sandwich tray. In front of everyone. The food on the original tray is thrown away.

Some parents protested, saying the policy would be embarrassing to the children when it was the parents who were at fault. But the policy was enacted, the hubbub died down and, according to Mary Ellen Winters, the only School Committee member still on the panel six years later, the policy worked.

School Committee Chairwoman Carolyn Mark was elected to the panel in 2012, just after the policy was enacted. Mark said she never liked the policy because of the shaming aspect of it, but that the committee “did not have the appetite” to look at the policy until recently.

What changed? The topic of lunch shaming surfaced in both state and national news, including Bob Plain reporting for RI Future. Plain did a deep dive into the topic starting last spring. It was coupled with a new policy from the federal government that actually made it cheaper for some school districts – those with a high percentage of children who qualify for free or reduced-price meals – to distribute meals for free.

East Greenwich is not one of those communities and, given the Town Council’s failure to meet the School Committee’s budget request this year, the district’s financial circumstances have only worsened since 2011. But given the overall mood and, as Chairwoman Mark pointed out, the technological changes that have taken place, the School Committee finally took up the policy this fall.

“There’s a recognition that a lot of things have changed in the last seven years, particularly with respect to technology,” Mark said Dec. 5. “Our ability to get to the same result without a cheese sandwich policy is much greater today than it was then. So it could be that was the answer at that time but I think there are other, perhaps better and more effective, ways to get to the same result today.”

Mark was referring to the online tools available now, including the ability for parents to arrange their account so that it automatically refills at a certain threshold, like an E-Z Pass. MySchoolBucks could also send out automatic email reminders. Both services would need to be requested by the owner of the account. That’s where education comes in.

According to Mark, the district has more than 1,500 accounts set up but less than half are using them on a regular basis. Of those, only about 200 have automatic payments set up.

“I think it’s going to require some education of the community,” she said.

One issue that remains is that even under the new policy, the food chosen by a student in arrears will be thrown out. Mark has asked the district’s Aramark Food Service representative to check with the state health department to see if prepackaged foods – many of the offerings at the high school, for instance, are prepackaged – could be returned. The committee should have that answer by Dec. 19.

School Committeeman Matt Plain said he is happy the policy is being revisited.

“For me, the dignity component of it was certainly the impetus for change,” he said.

If the School Committee approves the new policy on Dec. 19, it will go into effect Jan. 1. School Committee meetings can be watched after the fact on youtube here. The lunch discussion from Dec. 5 starts midway through part 2 and continues into part 3.