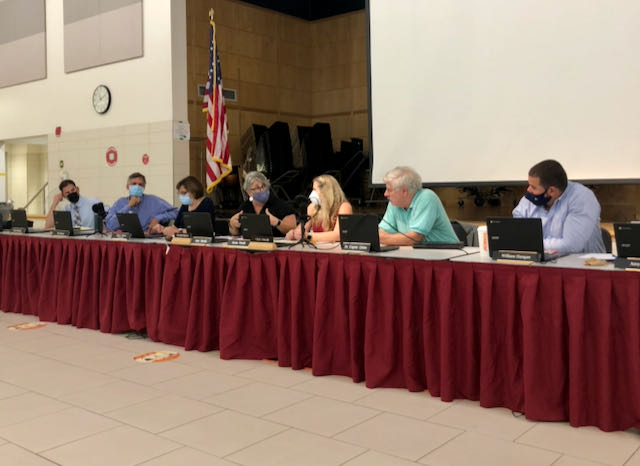 The panel considers linking mandatory mask use to infection rates

Needing to decide whether or not to mandate mask wearing in K-12 schools this year, the East Greenwich School Committee had a hot topic on the agenda for their first in-person meeting Tuesday since March 2020. And, indeed, 60 people turned out at the cafeteria at Cole Middle School and more than 125 others followed via Zoom. 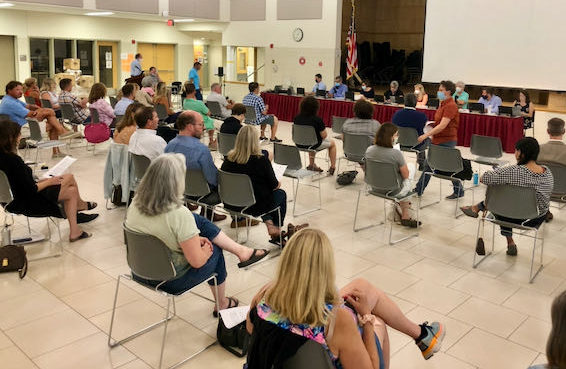 The mask decision is part of a larger COVID-19 “safety protocols and procedures” policy that covers everything from cleaning and visitors to when – or if – students and staff would be required to wear a mask. The draft policy unveiled yesterday (find it HERE) uses four rates of transmission as guidance: low, moderate, substantial and high.

Everyone, regardless of vaccination status, would be required to wear a mask if the rate of transmission was substantial or high.

The transmission rate in Rhode Island right now is high, according to the state Department of Health, with 140 cases for every 100,000 residents in the past seven days. So, if school were to begin this week, mask wearing would be mandatory in EG schools under the draft policy.

District pediatrician Howard Silversmith addressed some of the issues raised by those who think wearing masks in schools should be a parent’s choice, including the basic question: Do masks work?
“We know masks work. We know that,” said Silversmith, a North Kingstown resident who practices in East Greenwich. “There was not spread in schools when children wore masks” last year and “there was no spread of RSV, no spread of flu, no spread of strep.” He said his practice saw one tenth the usual number of sick children last winter.

Silversmith also said some people were following old data. “The Delta variant is not 2020 COVID. I can’t let what’s happening in Texas happen here. Not on our watch,” he said, referring to the higher number of children becoming infected with COVID and some contracting additional viruses on top of that, such as RSV, a respiratory illness that can be very dangerous for younger children that is usually seen in winter, not summer.

Before public comment began, School Committee Chair Anne Musella asked speakers to keep their comments to three minutes but the very first commenter blew right past that. Andrew Bostom of Chepachet, who has a medical degree, referred to studies he claimed showed that masks were not effective and were in fact harmful to children. He also called Silversmith’s information about the Delta variant “panic pornography.”

He refused to stop speaking after three minutes, then five minutes, then eight minutes, with Musella at intervals telling him he was out of order. Two additional police officers (one police officer had been assigned to cover the meeting at the request of Supt. Alexis Meyer) were called to potentially remove Bostom if he continued to speak. Eventually, Boston ended his statement, to cheers from those in the crowd who are against a school mask mandate.

East Greenwich parent Lisa Pomeroy, who has become a local leader in the fight against a mask mandate and who has a medical degree, spoke to mental and physical health issues around mask wearing for kids. “How are these children going to be able to learn effectively under these circumstances?” She said she was looking for data that masks were not harming children.

Allison Brindle, a pediatrician who lives in EG and is president of the R.I. chapter of the American Academy of Pediatrics (which issued this letter to school superintendents earlier this week), said masks right now were necessary. While her children also were tired of wearing masks, she said, “they are learning to understand. They are protecting other members of the community.” She added, “Our children can and should be in school and masking is a critical piece of that.”

Several others echoed Brindle’s remarks, including several medical doctors who live in East Greenwich and have children in the schools. Some noted masks were especially necessary  now since children younger than 12 are not able to get the vaccine.

Those favoring parent choice in the masking decision talked of the relatively low rates of child hospitalization and death, and some spoke of specific difficulties their children face because of masks. For instance, a young child with glasses and the inevitable problems faced by everyone who has to wear glasses and a mask. Or the child with a cleft lip and neurological issues who had to give up activities because she couldn’t cope with wearing a mask. One parent spoke about how her elementary age child was disciplined for wearing his mask incorrectly and how classmates threatened to tell on him if they saw him without his mask. Some expressed fears that mask wearing would become the norm.

After 90 minutes of comments, the School Committee decided to schedule a special meeting in hopes of voting on the policy before their next regular meeting Aug. 31. Musella suggested meeting with Supt. Meyer, Committee Vice Chair Alyson Powell, the school nurses, and Dr. Silversmith to finetune questions like which  transmission metrics the district will follow. During public comment, School Committee candidate Peter Carney said it looked like it would only take two cases of COVID-19 to move EG from the low to moderate category, and seven to put EG in the high category. The smaller group would look at those metrics and would discuss other policy questions like what happens if a child has to quarantine, now that distance learning will not be an option next year.

On Wednesday, Musella said she would like to prioritize people who live or work in East Greenwich when it comes to public comment – the first two commenters Tuesday night were from other communities. According to John Marion of Common Cause R.I., that is well within her authority.

In terms of time limits, she said she did not want to just cut someone off mid-thought, although she said Andrew Bostom – that first commenter – had abused the platform by refusing to yield after multiple requests.

“I want everyone to be heard. I want to let people finish their thoughts. However … everybody should be able to be heard.”