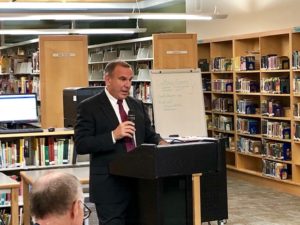 Editor’s Note: An earlier version of this story had the wrong date for the School Committee meeting. We apologize for the error.

We don’t know who the candidate it, but the School Committee will vote Tuesday, Feb. 25, before the start of its regular meeting on a new superintendent for the East Greenwich School District. Supt. Victor Mercurio, who had served in that role for 10 years, left in December to take a full-time position at Johnson & Wales.

Committee Chairwoman Carolyn Mark said the committee is declining to announce the candidate before the vote “following the direction provided to us by our search consultant.” That consultant, Joe Erardi, has led a largely under-the-radar search process that began in November. It included meetings with administrators at all six EG schools, district staff and community members – through both an online survey and two community forums.

The School Committee conducted first-round interviews over two Saturdays in January. They met in executive session earlier this month to discuss the superintendent search. Mark declined to comment on the candidate except to say she was “very excited to have the process moving forward.” Mark did say she anticipated the candidate would be there for the Feb. 25 meeting. The vote is planned for 6:15 p.m. in the library at Cole Middle School, with a 30-minute reception to follow. The regular meeting would begin as usual at 7 p.m.