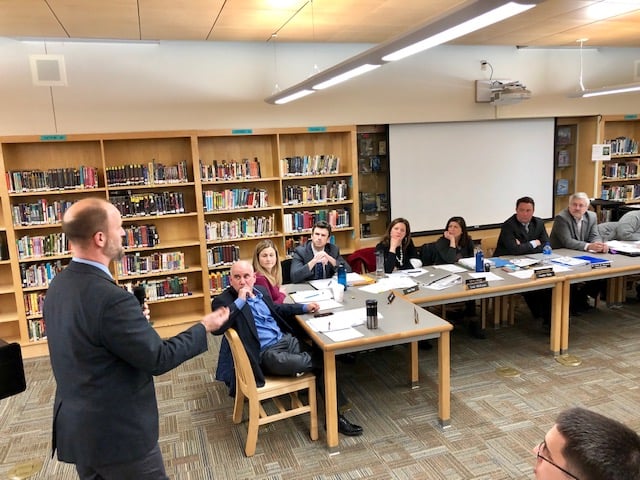 The School Committee Tuesday asked EGHS Principal Michael Podraza for more information on his request for the district to move away from using a weighted GPA. The GPA proposal is part of a package of changes he’s proposing for the Class of 2023, including eliminating the valedictorian and salutatorian and a move to the collegiate or Latin honors system.

The proposed changes are part of the larger EGHS program of studies Podraza first presented to the School Committee in December (read more about Podraza’s reasoning here). Committee members said Tuesday they’ve heard from some parents who are concerned with the changes, particularly moving to an unweighted GPA. (An unweighted GPA tops out at 4.0; a weighted GPA, which gives extra points for honors and AP courses, tops out at 5.0.) 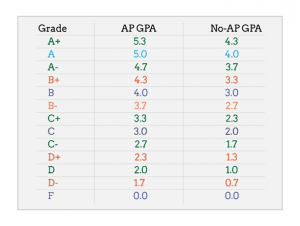 “There have been some compelling counterarguments that have been raised,” said Committeewoman Anne Musella. “Who weights? Who unweights? What about merit scholarships? Do some schools use weighted GPA to determine merit scholarships? Are you disincentivizing students who are challenged to learn? These are just some open questions…. I’d like to see more information, more data, more analysis that supports this.”

Musella made a motion to vote on the program of studies but leave the additional questions of GPA, val/sal and collegiate honors for a later date, after the School Committee gets more information. No one seconded Musella’s motion but several on the committee said they were comfortable with everything but the weighted GPA proposal.

Supt. Victor Mercurio said he’d talked with Barrington Supt. Mike Messore. Barrington High School, against which EGHS is often compared, has used an unweighted GPA for 20 years. According to Mercurio, Tesori said Barrington students still work hard and that the school was even increasing its AP offerings due to interest.

“Regardless of the outcome, you’ve put forth something that’s fostered a robust community discussion,” said Committeeman Matt Plain. “I think it would help to obtain additional information.… If there’s a problem, identify the problem, then flesh out the problem and arrive at a solution. There was a perception that the problem wasn’t clearly identified.” 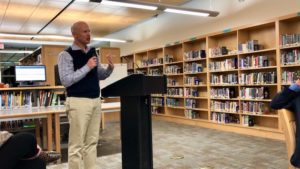 Parent Rick Land expresses his concerns about the elimination of the weighted GPA.

Three parents spoke during public comment Tuesday. Tara Wood prefaced her remarks noting with three children at the high school, she was “living and breathing the world of high school.”

“If you are taking a rigorous course load – not pushing but challenging yourself – and you get a certain GPA because you’re really, really working at hard classes, but it’s lower than someone who’s taking straight non-honors classes, the person with the straight classes may have a higher GPA than yours and get a higher level of academic distinction,” Wood said. “If we’re implementing a system that’s inherently biased against those taking the harder-level classes, it just doesn’t seem to have common sense or fairness with it.”

Parents Rick Land and Bob Brooks both asked what these changes were trying to fix.

Land argued parents should be able to see the same information the decision makers were seeing – in this case, the information seen by the teachers and administrators at the high school who voted to accept all the proposed changes.

“I would ask that this be done, particularly with this issue because it is going to have a very long-term effect on the students of this community,” said Land. “I think the entire public should be have the opportunity to evaluate it at the same level that you folks are so we can challenge your decision making.”

Plain said all information given to School Committee members was available to the public.

Brooks wondered it tinkering with how things are done now would make things worse.

After the meeting, Committeewoman Lori McEwen, who is in favor of all the proposed changes, responded to the idea that the system is working fine the way it is.

“It’s not that what we’re going is not working. It’s about how well it’s working and for whom?” she said. “Just because one thing is working doesn’t mean another can’t work better. I welcome the administration coming forward with more information to answer some of the issues raised during the School Committee meeting.”

To that end, Podraza was asked to present more detailed information about the changes at the School Committee’s next meeting, on Feb. 5. The additional information sought includes examining how GPA is handled in similar districts, including those in Massachusetts. In addition, Supt. Mercurio said, the district has sent out a survey to colleges and universities that have accepted EG students in recent years to see how those schools handle high school GPAs. Mercurio said they also plan to compare the list of college and university acceptances for both EG and Barrington.

The theory, he said, is that students untethered by weighted GPA expectations will take classes they truly want to take.

“What does that look like in real time, in real practice?” he said. That’s what the administration wants to be able to answer Feb. 5.

If you like what you read on EG News, consider making a donation to help support this work. Click on the Donate button below or mail a check to EG News, 18 Prospect St., East Greenwich, RI 02818. Thanks!