School Committee Rejects Corrigan’s ‘All or Nothing’ Consolidation Plan 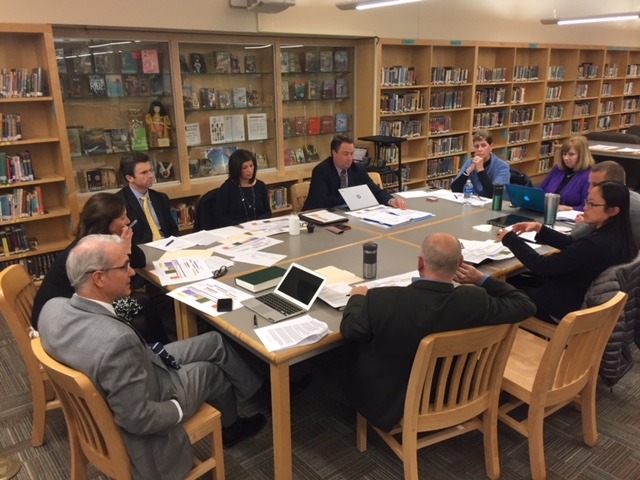 The action comes days before the Feb. 12 deadline proposed by Corrigan in December.

“We need to fix it,” Corrigan argued during the joint Town Council-School Committee meeting Dec. 18, referring to the current state of town-school consolidation. She said the two entities needed to decide: “Are we getting divorced or are we getting married?”

At a special session Thursday, School Committee decided against complete separation but refused to commit to a total merger, arguing that its legal duties of “care, custody and control” of the school district required that the superintendent have a finance staff member separate from the town.

In a letter Feb. 7 to the School Committee, Corrigan wrote, “I see two distinct options before us. One is relatively simple – at least in theory. The School Department will return to its pre-2005 state and take full responsibility for all aspects of managing the schools and their requisite support systems.”

She was referring to efforts that started in 2005, when the town took over some of the school department’s finance tasks (payroll and accounts payable), after a performance audit was conducted and the auditor recommended town and school finance departments be combined.

In early June 2017, Corrigan’s own Providence Analytics did another performance audit and more consolidation was encouraged. Corrigan became town manager June 19 and on June 30 she hired her Providence Analytics colleague, Linda Dykeman, to take over as finance director, as well as naming a school department employee to serve as human resources director for both the schools and the town (three town employees were let go in the process).

The School Committee cried foul, arguing they had not signed off on the job change for the schools’ HR director. After a joint meeting last summer to discuss the issue, further consolidation ground to a halt.

Corrigan even seemed to distance herself from consolidation efforts (the so-called “one town” plan) at a meeting Oct. 23: “It’s very clear that the path to consolidation will be a long one if we even get there, due mostly to concerns on the school side,” she said at a Town Council meeting that night.

“We’re basically being forced into a spot that we lose either way. We either lose control or we lose the financing,” he said.

“Right now, we can’t afford to do a standalone,” said Superintendent Victor Mercurio. A complete separation of finance functions would require the school department to recreate payroll and other finance functions at a time when the district had hoped to add a director of teaching and learning. That goal remains elusive with the high school without a librarian (and, so, a library) among other financial pressures.

Chairwoman Carolyn Mark said Thursday she had sought clarification from Corrigan’s Feb. 7 letter – did Corrigan mean just finance department consolidations or was she referring to all the functions the town has taken over for the schools in recent years, such as grounds maintenance, snow and rubbish removal, and school resource officers.

In an email response to Mark, Corrigan wrote, “I am referring to what we have collectively discussed as back office business functions. We look forward to learning of your decision … on Monday. The Town is committed to supporting the transition for either scenario by July 1, 2018.”

But School Committee members rejected the idea they had to split the baby, especially since they were in support some aspects of the total consolidation plan, such as merging the human resources role.

Combining the human resource position would be “a huge savings for the town,” said schools solicitor Matt Oliverio. The School Committee rejected the town’s unilateral decision to consolidate the human resources decision but said such a consolidation could work – if they had a part in crafting it.

But total consolidation would not work, said Mark.

That said, the committee seemed open to the idea of moving school administrators from their office at 111 Peirce Street down two blocks into Town Hall in an effort to bring more cohesiveness to town-school operations.

Committeewoman Mary Ellen Winter asked Mercurio if he could work with the total consolidation as envisioned by Corrigan.

“I’d like to see us try to come together. I like the idea of ‘one town,’” Winter said. “It’s been town versus schools forever.”

“The short answer is, yes, I can make it work,” replied Mercurio. But, he added, “It’s also important that the superintendent and the town manager have a working relationship.”

Committeeman Matt Plain said he thought such a consolidation could be possible but not from the tone of Corrigan’s letter.

“I appreciate what an amiable person you are and how willing you are to try to make things work,” she said to Mercurio. “But I think that we have a responsibility as an elected body … to ensure that the structures are in place that will enable you to be successful…. I don’t necessarily see a finance director–director of administration who isn’t 100 percent dedicated to the schools as providing you with the support that you need…. I worry about our ability to meet that statutory obligation if you don’t have a dedicated director of administration. So, while I appreciate what you are saying, I’m not sure that compels me to have a different point of view on it.”

One big question that remains is whether or not the Town Council would be willing to discuss alternatives to Corrigan’s stark A or B approach.

“I can’t imagine a Town Council president who’s not going to have a discussion about what you collectively discussed here tonight,” said Solicitor Oliverio. “They’re going to say no? I find that hard to believe.”

Show your love for local news – donate to East Greenwich News during February and take part in a sustaining donor match! Click here to learn more.