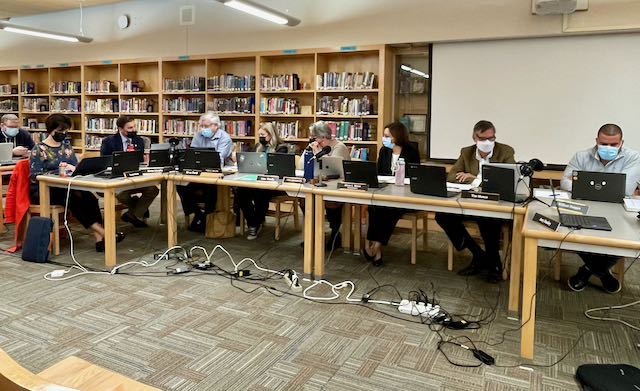 The School Committee discussed how to conduct a search for a new school superintendent at their meeting last week, with Alexis Meyer’s plan to retire in April. One big question: do they hire a consultant to handle most of the search – as they did two years ago – or do they take the search in house?

The reason they hired a consultant in 2019 – at a cost of $9,000 – was because members had decided that a search first for an interim and then for a permanent superintendent would be too time consuming and best left to a professional in terms of figuring out what the community was looking for then crafting a job description and weeding through applications.

In other words, Chair Anne Musella wanted to know, does the School Committee have the bandwidth to tackle a superintendent job search?

Member Nicole Bucka, who served on the 2019 superintendent hiring committee as a parent representative, said she had real questions about the committee’s capacity to handle the search itself. But she also noted there were a lot of applicants last go-around and she wondered if perhaps the committee could reach out to some of those who were highly considered to see if they might still be interested. Additionally, Bucka said they should ask the former consultant, Joe Erardi, for whatever materials he might still have on hand from his work with East Greenwich.

Member Tim Munoz said the district’s recently approved strategic plan could be used as a job description. He also said he hoped the district would not be afraid to look for candidates beyond the state border.

There was some question about how the process started two years ago, with Munoz and Musella pondering a small group of members to get to work on details between meetings. But member Gene Quinn said he was not in favor of a subgroup taking charge, arguing it would leave the rest of the committee members in the dark.

“I think the last thing anyone would want is a star chamber,” said Munoz. Musella noted the early work last time was done by then-Vice Chair Lori McEwen, possibly with help from then-Chair Carolyn Mark.

Member Alyson Powell noted the past two years have wrought huge changes and the people interested in being superintendent in 2019 may not want to be anymore.

“I do think there needs to be a pretty wide net cast,” she said, adding, “I think we need to be part of all of the decisions.”

Town Councilor Caryn Corenthal, when the public was invited to speak, said she thought the School Committee did not need to hire a consultant.

“I think you should do the search yourselves,” she said. “We found a town manager. Over 100 applicants. We went through them. We got down to 12. Then we had a spreadsheet and checked things off and I think we found a great manager. Frankly, I trust you more than a consultant.”

Musella said she would do some research and send it out to committee members in advance of their next meeting, Nov. 23. She also said she wanted some guidance from the committee about whether or not to reach out to Frank Pallotta, the man who served as interim superintendent two years ago, to see if he would be willing to serve in the same capacity again for May and June 2022.

Earlier in the meeting Musella had said, “I wonder if we could just reach out to [Pallotta] … He was from central casting, an ideal interim superintendent.”