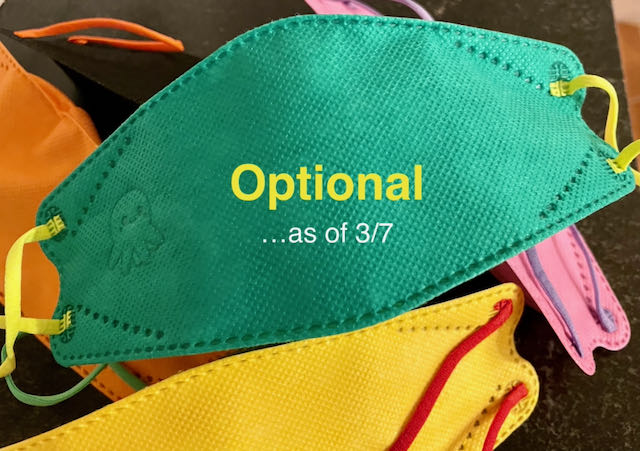 The EG School Committee voted 6-1 to rescind the mask mandate, which means it will go into effect Monday, March 7, the first school day following the end of the state’s mask mandate March 4. Committee member Kevin Murphy voted against.

“Consistent with CDC and RIDOH guidelines, face masks or coverings are recommended, but shall be optional in EGSD, except when mandated by federal or state law, order, or regulation.

“After consultation with RIDOH and the District’s consulting physician, the Superintendent has discretion to impose a temporary mask mandate district or school wide to protect the health and safety of all EGSD students and staff, subject to the exceptions outlined below.” (Find the full policy here: COVID 19 Health and Safety Protocols and Procedures.)

One reason for the change was East Greenwich’s high rate of student vaccination. According to Supt. Alexis Meyer, 80 percent of students and 98 percent of staff have received the primary vaccine series. (You can look up COVID-19  data on the state website HERE.)

After the vote, Murphy said he was “very comfortable with the revised policy” and did not want to delay its implementation but that he abstained because “[I] was uncomfortable relinquishing my right to vote on the temporary mask mandate, as outlined in the latest policy.”

Murphy had proposed the School Committee vote on a proposed mask policy change within a specific timeframe, say within five days.

He said because he was “only 90 percent” comfortable with the policy he could not vote yes.

Public comment on the policy was weighted toward those who expressed relief over the proposed change to the mask mandate but also frustration the superintendent would have discretion to reimplement a return to masking, especially if parents weren’t allowed to weigh in.

Supt. Alexis Meyer pointed out any return to masking would be done in consultation with the state Department of Health and the district pediatrician. Still, several commenters said parents should be part (or all) of the decision.

School Committee Chair Anne Musella noted that usually the committee meets at least every other week most of the year so there would be a public meeting where people could voice their concerns within days or at most a couple of weeks.

“A lot of parents feel that they should be able to make the decision,” said parent Lorraine Martin. She added, “There is a lot of distrust in the school system and all around. Everyone just wants to be heard.”

Parent Brian Turner said his comment was about procedure, not individuals.

“Consider striking the language in the policy giving that authority to any superintendent. For something that has been so challenging for the children in this community people would just like to know the conversation has been had, he said.

This was the second reading of the policy change, as required by the district. Find the discussion from the School Committee’s first reading of the change (on Feb. 15) HERE.

This article was added to after it was initially posted.