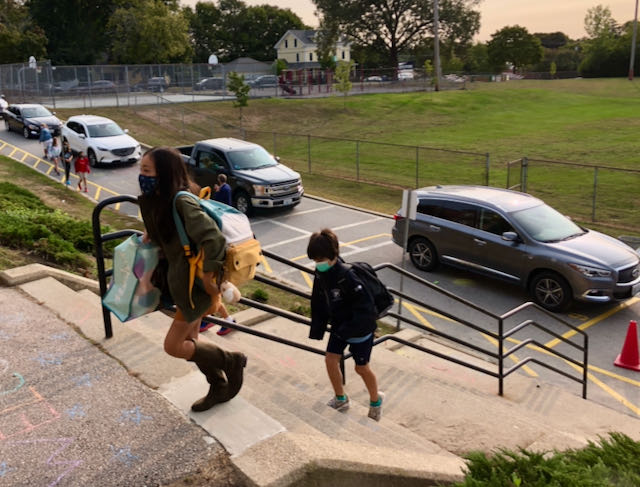 Supt. Alexis Meyer presented a revised COVID-19 policy to the School Committee Tuesday night that would allow students and staff the option of wearing a mask during school, eliminating the requirement to wear a mask.

Meyer said district pediatrician Howard Silversmith, M.D., and EG school nurses have endorsed a mask-optional policy. She said she and Silversmith spoke three times. “His rationale was that certainly we know much more than we did two years ago. We are in a different place, there are treatments available and [he noted East Greenwich’s] high vaccination rate,” she said.

This change would go against guidelines set by the Centers for Disease Control (CDC) and the American Academy of Pediatrics, both of which still recommend mask-wearing in schools.

Another change to the policy would give the superintendent the discretion to impose a temporary mask mandate for the health and safety of students and staff, Meyer said.

“We’re moving to a you-do-you sort of risk assessment,” said Committee member Alyson Powell. “We’re moving from a collective safety blanket and sort of shifting it to a personal responsibility…. Is that the goal? I’m not putting judgment on that. I’m just trying to understand how to change my thinking about it.”

“We’re understanding we’re in a different phase of the virus,” Meyer said. “As we’ve gone through each of these phases … we have taken the journey together and our thinking has evolved and changed.”

She mentioned the change in policy that took place in early January, where a person with COVID could return to school on Day 6. That seemed alarming at first, but “we’ve managed that,” she said.

Committee member Nicole Bucka suggested the language in the policy be changed from “mask optional” to “masks are highly recommended,” which would not be a mandate but would follow CDC guidelines.

She also asked about staff or students who are immunocompromised and for students under age 5 (the only age group not yet eligible for vaccination).

Meyer said in that case, the student or staff member could have a 504 plan in place, which requires a doctor’s note. A 504 plan is a blueprint for how the school will support a student with a disability to remove barriers to learning. Potentially that could mean requiring those around immunocompromised students and staff to wear masks.

For the 4-and-under age group, Meyer said masking has been difficult all along so more stringent quarantine guidelines have been in place and would remain in place.

Bucka also expressed her appreciation to the school community for “the two years of sacrifice for people like my son….” Bucka’s son has been at high risk for the virus and was only able to get the vaccine in December, she said. “I just want to say a very sincere thank you because my child could go to school because everyone was masked.”

“I’m very troubled by the fact that there will be a small number of students who are putting their lives at risk,” said Committee member Gene Quinn. “We need to consider their welfare, their well being.”

Tim Munoz asked about what teachers are saying about the potential change. Meyer said she had not gotten any official notice but had spoken with the union head and other teachers and there was no significant disagreement to the proposal.

Munoz also suggested the district form a steering committee of individual experts in the community to help guide future decision making, noting the “embarrassment of riches” in EG in terms of doctors and mental health professionals.

He suggested an interdisciplinary approach to dealing with questions like this. “We have learning loss, we have real social-emotional adjustments and challenges going forward. It has not been easy for anyone.”

Committeeman Will Hangan asked if staffing issues could trigger a temporary mask mandate and asked if the district had enough substitute teachers now.

“We are in a good place with substitutes right now,” said Meyer. “We have had a couple of really successful weeks.”

Regarding a temporary mask mandate, she said, “Should conditions change where I would be faced with a decision-making scenario, I would never act in isolation.”

Committee member Kevin Murphy expressed his support of the new policy but said he was uncertain about ceding control of that decision to implement a temporary mandate.

“Perhaps some language could be added … to consult with the School Committee or convene an emergency meeting,” he said.

“That is the challenge,” said Committee Chair Anne Musella. “How nimble do we need to be?”

She also expressed concern that it would not be reasonable to place that decision with the superintendent, based on the intense feelings this issue has raised.

“We receive a lot of emails on both sides of what has become an argument,” she said. “There’s so much vitriol. We’re so polarized that I have reservations about placing that decision solely on the shoulders of the superintendent.”

She mentioned some emails where the tone has been “difficult.”

During public comment – which did not begin until just before 11 p.m., nearly four hours into the meeting – several speakers expressed frustration and even anger that the COVID policy wasn’t taken up earlier in the meeting. (The meeting started with elementary and curriculum budget hearings that lasted nearly three hours.)

“I’m a little shocked that the committee didn’t make time for this earlier given the number of parents on the call interested in speaking,” said resident Kristin David. She went on to note the “alarming rates” of mental health issues during the pandemic and frustration that she hadn’t heard anything from officials about mental health harm.

“We need to acknowledge the mandates have not been benign,” she said. “We can protect kids at risk without harming students overall.”

David also called for elimination of the part of the policy allowing the superintendent to impose a temporary mask mandate.

Parent Catherine Rodgers asked if the district had studied the negative effects of masking in schools and urged the committee to encourage families to keep their children at home if sick rather than to require masking again.

Parent Steve Thrall said he wanted to put the power to impose a temporary mandate in the hands of elected officials. He also questioned those like Committeeman Quinn who used language like “putting lives at risk” in terms of more vulnerable students, noting the relatively low rates of illness and death from COVID among children.

Parent Jacqueline Ayotte read a brief statement from her fifth grade daughter, who Ayotte said had wanted to read it herself but had gone to bed because of the late hour. Her daughter has bilateral cochlear implants and has struggled:

“Why do we have to wear masks at school but not at stores  and restaurants and football games? It’s kind of an unfair rule to us,” Ayotte read.

Ayotte said the committee’s decision to put the COVID policy so far down on the agenda seemed intentional. While she recognized some parents had fears about the virus, her fears were for the mental health of children. “Kids aren’t happy,” she said.

Parent Mohsin Malik said he was in favor of maintaining the mask mandate “for now,” noting the cases were down but still high. He also said treatments for COVID-19 were not yet approved for children and said there was no such thing as an N95 mask for children. “Really, masking is helpful when everyone masks,” he said.

On Wednesday, Chair Musella defended the placement of the COVID policy on the agenda.  “Last night’s (and all) budget workshops were scheduled in December. We must adhere to a tight schedule for all budget-related meetings so that we can meet the statutory deadline for approving a preliminary budget in early April,” she wrote via text. “All of our agendas are tight. It is also difficult to predict how long a single workshop or agenda item will last.”

Speaking to what was said at the meeting Tuesday, she added, “I can certainly understand the frustration of some. We plan to start the March 1 meeting early – perhaps 6 p.m….  We also plan to place the second read of the COVID policy toward the top of the agenda.”

District policy changes like this one require two reads – Tuesday marked the first reading; the second reading is slated for March 1. If the School Committee approves the revised policy, it would go into effect as of March 4, the day the state’s school mask mandate ends.

Here’s a link to a recording of the meeting: https://drive.google.com/drive/folders/17_C28hxCs6jjJdLzA2fVL1qmInkQqzd0. FYI: You may need to download the file.