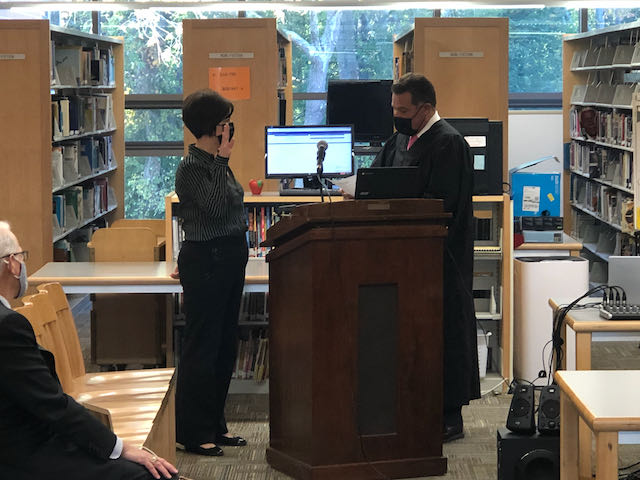 The School Committee was seven members strong again as it voted 7-0 to approve the district’s new strategic plan Oct. 19. Nicole Bucka, who won a special election Oct. 5 to fill the seat vacated by Lori McEwen, was sworn in at the start of the meeting.

The 2021-2024 plan, titled “All Means All – A Total Commitment to Every Student,” is the first strategic plan adopted since the 2020 Education Accountability Act, which increases site-based management at the school level. (Here’s a two-page synopsis of the plan: EGPS Strategic Plan Summary.)

“This means that new School Improvement Teams (SITs)* in each of our six schools will play an important role in implementing the overall district strategic plan and allowing students and parents to have a greater voice in school programs,” said committee member Tim Munoz via email after the meeting.

The vote followed months of work by a 5-member design team and contributions from a 40-member committee, including teachers, parents, elected officials, and district administrators.

There was an effort to include more measurement tools in this plan, the most significant of which will be the “EGPS Dashboard,” a report card of sorts for the district. Another focus will be on more community engagement.

“We want to tap into the time and talent of the many people in EG, from families to professionals to businesses, as well as the global network of EG alumni, who care about the schools and who can offer so much,” said Munoz.

“I have to say how very impressed I am with how ambitious it is,” said member Alyson Powell during the meeting. “But it’s also very specific. I think that’s really important. I love that there’s going to be a dashboard.”

“The Plan provides enough specificity to be actionable, while leaving room in implementation for significant input from stakeholders, including through the newly-convened School Improvement Teams. The success of this Plan depends on meaningful collaboration among students, teachers, faculty and staff,” Chair Anne Musella said via email after the meeting.

“We’re very excited to get going on executing our strategic plan, to ensure that the public schools remain a crown jewel of East Greenwich,” said Munoz.

The School Committee also reached an agreement with Matt Oliverio (with Oliverio & Marcaccio LLC) to extend his services as district solicitor through Dec. 31, to be paid on an hourly basis in November and December. Oliverio notified the School Committee Aug. 31 of his decision to not seek contract renewal; the contract ends Oct. 31. Oliverio has been the district’s solicitor for 17 years, through seven School Committee chairs, starting with Vincent Bradley in 2004 (followed by Sue Cienki, Jean Ann Guiliano, David Green, Deidre Gifford, Carolyn Mark and the current chair, Anne Musella).

“For me, the workload has increased and it’s become more demanding and we can’t commit the time,” Oliverio said in an interview. “We love the client and I think we’ve done good work but we opted not to renew the contract.”

Oliverio & Marcaccio has received a flat fee of $120,000 a year for services, with additional fees ($200 an hour) for areas like labor contract negotiation and litigation. For the next two months, they will be paid $250 an hour. In addition, Oliverio has agreed to negotiate the teachers contract – the current contract ends June 30 – for that same hourly fee.

“I’m pleased that he will continue to make himself available for discrete matters, such as the upcoming teachers’ negotiation,” said Musella via text. “We will reach out through the public procurement process to the handful of firms in Rhode Island that have a solid education law practice.”

Oliverio said the EG School District is the only district they have ever represented as solicitor, although they do work on special projects for other districts.

Also Oct. 19, three people spoke during public comment, including former Town Council President Sue Cienki (before that, head of the EG School Committee, as noted above, and now head of the state Republican party), who said the School Committee should withhold funding and move to get rid of Tim Duffy, head of the R.I. Association of School Committees, because of what she characterized as overreach when he told school committees RIASC would be willing to engage with the U.S. Attorney and the FBI in the event meeting disruptions relating to protests of mask mandates, equity in education, and the rights for LGBTQ and students of color.

After the meeting, committee chair Musella said, “I have no comment regarding RIASC, other than if members of the School Committee wish to discuss our membership in RIASC, we can add it to an agenda.”

Parent Jeffrey Baker also spoke, the second time in as many meetings. In both instances, Baker decried what he said was the indoctrination of students regarding issues of equity in education.

The third speaker was another parent, Suzanne Solomon, who voiced her concerns over the graphic images depicted in a book (“Gender Queer”) that’s on a reading list available through the high school library.

After the meeting, Musella said none of the EG public schools owns a copy of “Gender Queer” and that students do not have access to the book through the district. She noted the high school’s library web page includes several book lists, including the Alex Book Award 2021 winners, on which “Gender Queer” can be found.