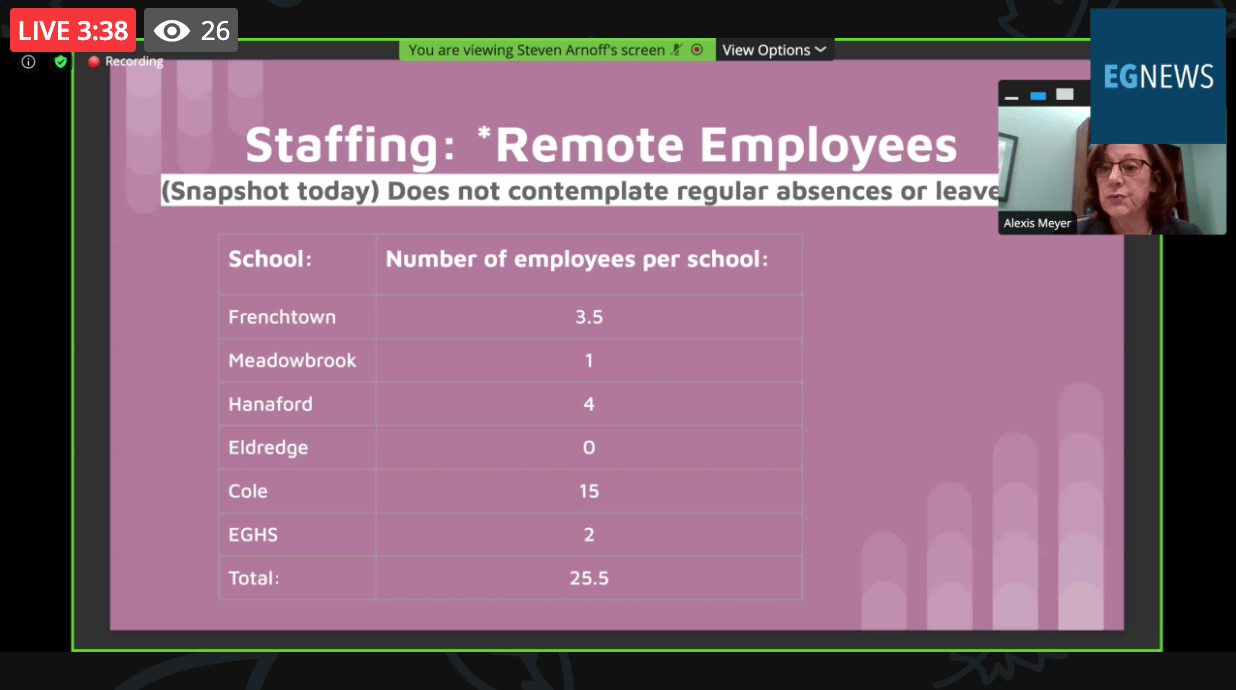 At a special meeting Thursday, the School Committee approved a recommendation by Supt. Alexis Meyer to move the district to distance learning Monday, Dec. 21 through Friday, Jan. 8, in a 5-2 vote, with members Kevin Murphy and Will Hangan voting no.

“I would never make a recommendation that I didn’t believe was in the best interest of our students and staff,” Meyer said. She said the number of staff absences in recent weeks – due to quarantine requirements or needing to care for their own children in quarantine or otherwise or even just waking up with a sore throat – had made keeping schools open increasingly difficult. On Thursday alone, Meyer said, there were 25 teachers absent.

The total number of distance learning days is 8 under Meyer’s recommendation, with the Christmas break in the middle. One caveat: In-person learning will continue for special education students on an individual basis.

Meyer said she wanted to give staff and families enough time to prepare for the switch and noted that when school began in September, a move to distance learning was always on the table. She gave these specific reasons for why she was recommending distance learning now.

East Greenwich had 91 new confirmed cases of COVID-19 the week ending Dec. 5, with a case positivity rate of 8 percent (Rhode Island’s is 9 percent). According to Gov. Gina Raimondo at her briefing earlier Thursday, there’s been a slight decrease in the state’s percent positive rate since she implemented a two-week “pause” Nov. 30, but overall case numbers are still too high and hospitalization rates are going up. She announced today she would extend the pause for one additional week, to Dec. 21.

Meyer said the idea behind EG’s move to distance learning was to get away from the current post-Thanksgiving surge in virus cases.

School Committeeman Gene Quinn summed it up this way: “Everyone agrees, in person instruction is much better for students, particularly younger students and they’re also probably safer in school than at home…. But what I’m hearing now is that system is at a breaking point.”

Murphy asked why the district couldn’t just close Cole and the high school, so younger children could continue in-person learning.

Cole has been particularly hard hit by teacher absences – Meyer noted on a recent day the school nearly didn’t open because there were not enough substitute teachers. She said she and Asst. Supt. Mike Podraza and building secretaries have all had to cover classrooms from time to time. Some teachers are teaching remotely but you still need an adult in the classroom to supervise.

Meyer said one of the reasons relatively few EG students and staff have contracted COVID-19 is because of the protocols set in place to maintain small, intact groups to students and staff, with little overlap. That has become more difficult with staffing needs and would remain right now if the elementary schools remained open.

“I wouldn’t make the recommendation if I didn’t think it was necessary,” she said. “I know it’s challenging. I would not be honest if I didn’t come forth and give you the actual impact on our staffing.”

After committee members weighed in, Musella allowed the public to comment – with several parents urging the committee to vote against distance learning and a couple of teachers arguing for the move.

In particular, Cole teacher Chris Boie spoke of the sacrifices teachers have had to make during the pandemic.

“There are some kids in this district who really truly cannot access distance learning – thank you for acknowledging that difference,” she said.

Parent Kristen Carron said teachers have been doing a “fabulous job.” But she brought up Gov. Raimondo’s press conference from earlier in the day, where she had harsh words for districts that had opted for distance learning.

“She said the schools have all the resources they need,” Carron said. There’s a disconnect, she said.

Parent Alison Poirier reiterated that the governor had not made any recommendation to move to distance learning.

“I have to take time out of work,” she said of distance learning. “When [my children] are at home, I am home teaching them.”

The School Committee could have held the decision until its regular meeting Tuesday but when member Tim Munoz asked what, if anything, might be different by Tuesday, Meyer said she didn’t think there would be anything different.

The committee then voted to accept Meyer’s Dec. 21-Jan. 8 recommendation but added a couple of stipulations: making it subject to any state mandate requiring additional distance learning days or a recommendation from Meyer to have students return before Jan. 11.

“Try to think about this as just 8 days,” said Meyer. “I’ve thought deep and hard about this and I do think this is the right move for our district at this moment in time.”

You can watch the meeting HERE.