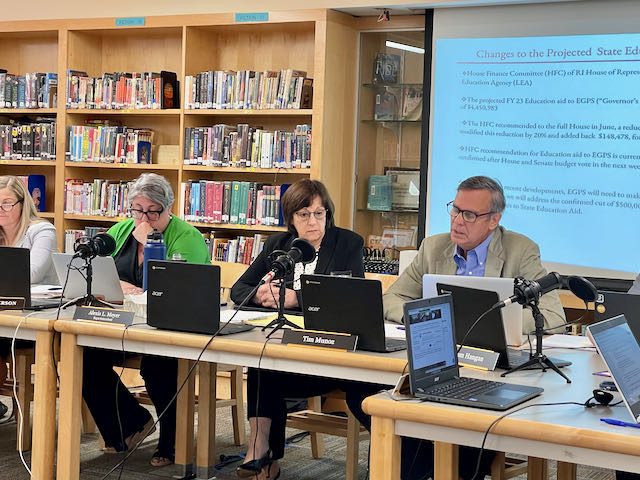 As soon as the Town Council voted June 6 on the overall town budget, the School Committee knew it was going to have to fill a budget hole at its June 21 meeting. That’s because the money approved by the town ($38.7 million) was $500,000 less than the committee had requested when it approved its budget back in April.

But between June 6 and June 9, that budget hole more than doubled in size, due to a decision by the House Finance Committee to reduce the district’s state education aid by $729,000.

So, on Tuesday, the School Committee voted to use $975,000 out of the district’s fund balance, along with some other budget shifts, to approve a $45.2 million budget.

This isn’t how the budget process usually works, but since the school district – by law – must approve its budget in April and the Town Council – again, by law – must approve its budget by June 10, that means local numbers are hardwired before the General Assembly votes on the state budget. So, that last-minute change in how much East Greenwich was to receive in state education aid made school budget revisions difficult. Especially since the largest part of the school budget by far is salaries and, by contract, the district must notify teachers and other unionized staff by June 1 if any layoffs are planned, so that avenue was foreclosed.

On Tuesday, Supt. Alexis Meyer, in her final meeting as superintendent (she retires June 30), laid out how she’d decided to recommend handling the initial $500,000 budget cut from the town when it became official June 6. That involved changes in the budget forecasting, resulting in some savings due to lower costs (unanticipated resignations, a student transfer), revenue increases (more CTE in-district transfers) and some spending cuts (in capital expenditures). There were a couple of expense increases too but with an increase in fund balance use from $265,000 to $394,000, Meyer said they could make up the $500,000.

But, as members of the School Committee pointed out Tuesday, that was before June 9, when suddenly the district was faced with an additional budget cut of $729,000. That number decreased to $581,000 after frantic appeals from town officials (EG, Barrington and Smithfield were all in the same boat and they each got a 20 percent restoration), but that still meant a significant budget shortfall that members said they couldn’t have anticipated (see video below).

This time, the solution was neater, if not better: use fund balance to cover the entire difference.

The committee voted 4-2 to approve the budget, including the use of fund balance. Chair Anne Musella and member Will Hangan voted against.

Musella expressed her frustration with the whole situation, noting how carefully the district and committee had worked on their budget over many months and how they already had less from the town than they’d sought. Despite the careful budgeting, she said, “here we are again, finding ourselves having to crawl out of a hole. It is upsetting, it is upsetting.”

Musella also said using nearly $1 million in surplus money was not sustainable and that it could tip the district into a structural deficit (where an entity spends more than it takes in).

Finance Committee chair Tim Munoz said he agreed the situation was unjust, but said this use of fund balance was appropriate, since the committee had approved a budget based on numbers that changed long after the district could respond to the change.

Fellow Finance Committee member Gene Quinn agreed. “I don’t think you can accuse us of overspending in the original budget,” he said, adding, “We are not setting ourselves up for a structural deficit.”

Committee member Nicole Bucka said she was frustrated because the cuts to EG, Barrington and Smithfield were unnecessary, noting the state was so flush with federal Covid monies it added $17 million in education funding even as it was shorting EG and the other two districts.

“We were already making cuts… and we cut further. After year after year of that, we get deferred maintenance,” she said. “We are impacting instruction here…. We should be saving because times are good.… instead, we’re deferring maintenance, we’re deferring tech refreshes. I’m going to say OK to fund balance use … but this is wrong.”

Musella pointed out the district would be starting the new fiscal year many hundreds of thousands of dollars in the red because of this use of fund balance for operating expenses (as opposed to one-off expenses). She said she would approve the budget as recommended by Supt. Meyer only if the School Committee included language about asking the Town Council for additional funding (aka a supplemental appropriation), and she suggested asking for an additional $300,000.

The School Committee is allowed to seek a supplemental appropriation at any time. Citing that, other members said they were more inclined to wait until the dust settled on current year finances. The fiscal year ends June 30 but Finance Director Maggie Baker said the real numbers on FY2022 wouldn’t be known until October.

A motion from Munoz included the “discussion” of a supplemental appropriation but did not offer anything more specific. When it came to a vote, Musella voted against.

Member Will Hangan also voted no, saying he did not think there should be any mention of a supplemental appropriation in the motion.