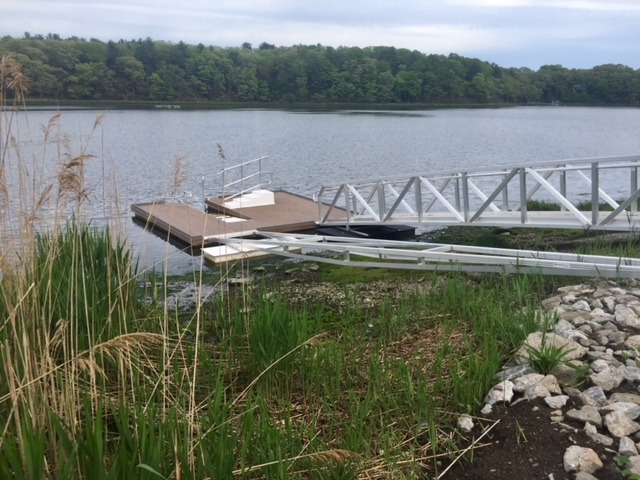 The town recently added a kayak and canoe dock at Scalloptown Park, looking to offer more access to the EG waterfront and redirecting those smaller craft away from the busy town boat launch.

The dock is handicapped accessible, which explains the extra poles and what appears to be steps. Someone in a wheelchair can use the steps to ease themselves from their chair down to the kayak. “If we’re doing it, why wouldn’t we make it handicapped accessible?” said Community Resources and Parks Director Cathy Bradley. “It’s a great activity for all abilities.”

The dock was paid for primarily with grant money from the state – the grant supplied 80 percent of the money; the town had to put up 20 percent. The total cost is still being tallied, Bradley said, but was approximately $42,000.

The focus on the waterfront was spurred by former Town Councilman Bill Stone, who made creating an emphasis on the town’s waterfront part of his 2014 campaign. He served from 2014 to 2016. Councilman Sean Todd (2014 to present) has continued that work. Bradley said she applied for the grant in 2016. The dock was assembled over the winter at the town’s highway garage and installed in April. 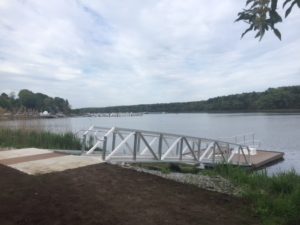 Bradley said the Coastal Management Resources Council (CRMC) – which needed to approve the dock – was very supportive. The dock will cut down on shoreline erosion caused when people put in at undesignated areas.

Last year, L.L. Bean ran a kayak operation from Scalloptown Park but Bradley said they will not be returning this year.

The town’s Cove Commission has heard there is some interest from vendors in operating a rental facility (L.L. Bean ran guided kayak trips, not individual rentals) but the Town Council would need to approve any rental operation on town property. So, for now, it’s BYOK (or C).