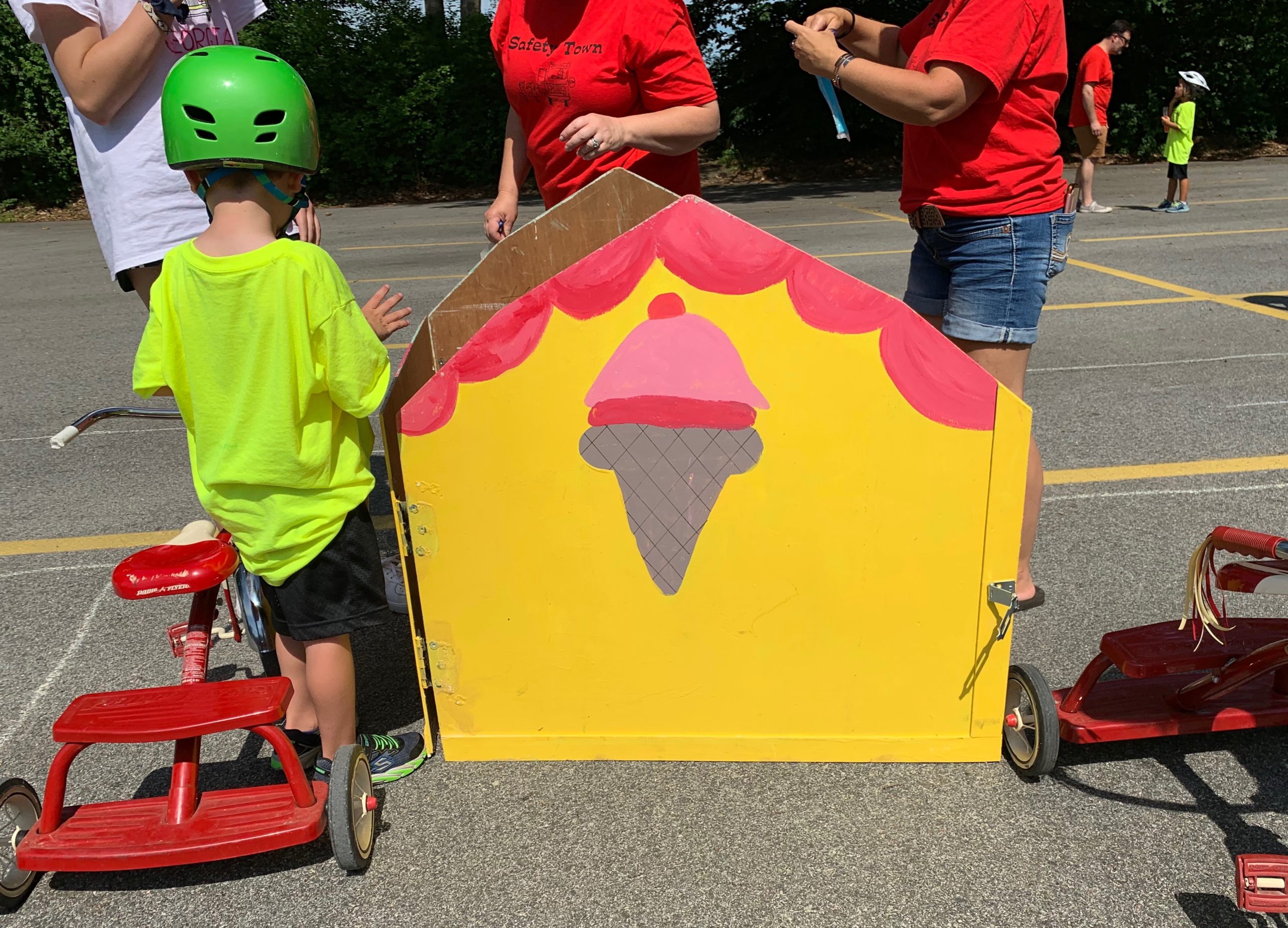 The 5 year old comes to a complete stop at a stop sign. She waits for a group of her peers to cross so she can continue riding her tricycle. When she reaches the Ice Cream Shop, she stands up and takes off her helmet. She then enters the shop and asks for some ice cream.

Not far off, some other 5 year olds run to the auditorium, with hopes of meeting the talking bus they’ve heard so much about. They sit down and listen to the school bus teach them all about safety.

This is Safety Town.

Safety Town took place at Meadowbrook Farms Elementary School, where it has been running for the past few years. It ran the last week of June, just as it usually does, before children scatter to the wind of summer vacations and other camps. Each day of the week focused on one area of safety. Tuesday’s focus was fire safety, Wednesday’s was bus safety, Thursday’s was pet safety, and Friday was all about police and train safety. 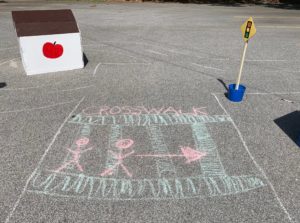 An illustrated crosswalk at Safety Town.

A total of 81 campers and around 40 counselors (all volunteer) participated in Safety Town. Of the 81 campers, half will go to Frenchtown and the other half to Meadowbrook. The campers are placed into groups based on which school they will be attending, so that they can meet and get familiar with their soon-to-be classmates.

“The campers make bonds that last forever,” said Ann Fay, who teaches kindergarten at Frenchtown and runs Safety Town these days. Fay said she gets to see those bonds in the classroom, adding, “The campers get to connect with the counselors.”

At Safety Town, the campers get a taste of kindergartner life, including riding on a school bus, but they also get to sit in a firetruck, ride in a police car, and ride a tricycle around chalk-drawn “streets.”

Safety Town is a week-long course designed to teach children all kinds of safety before they enter kindergarten. It was a nursery school teacher named Dorothy Chlad from Bedford, Ohio, who first developed the program. Chlad figured a safety program would help children to avoid getting hurt doing everyday things, like crossing the street. She’s compared Safety Town to “vaccinating” children against accidents. 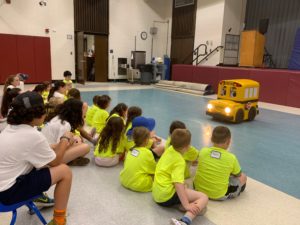 Buster the Bus, a robot, was popular at Safety Town.

Of all that happened over the week, many of the campers’ favorite part was listening to Buster the Bus. Buster taught  campers how to be safe on the road by talking to them in an interactive way. Buster warned that “not every street has a sidewalk,” and taught the campers a handy trick to remember “left” and “right” by making an “L” shape with their left hand.

“I learned that I need a helmet to be safe” riding a bike, she said. Vivian’s mother, Kelly, whose kids have all participated in Safety Town, likes the program too.

“It makes the kids more aware of what a school environment looks like,” she said.

One of the hallmarks of Safety Town is the small village created as a training ground for the kids. With chalk for roads and crosswalks, and painted boxes (decorated by the Boy Scouts) for buildings, Meadowbrook’s front parking lot was transformed into a town. The campers wore helmets they brought from home and rode tricycles around the buildings. They learned to stop at stop signs and only drive on the roads. 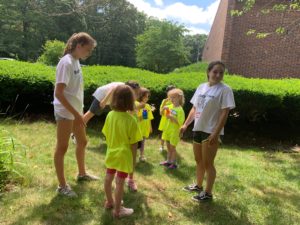 To keep the children engaged, they got breaks in between safety lessons. Some popular games were “Duck, Duck, Goose,” “Ring Around the Rosie,” and hopscotch. The campers also made crafts, colored, blew bubbles, played on the playground, and ate popsicles.

Of course, a program like Safety Town doesn’t just happen. A few years ago, it almost died out for lack of leadership. It’s been going strong under Fay’s guidance, but she and other organizers credit the volunteers and town staff for helping to make it a success.

Campers really seemed to enjoy all that Safety Town had to offer. With a good balance of learning and play, the program makes for a great experience.