Ringing In Joy at St. Luke’s 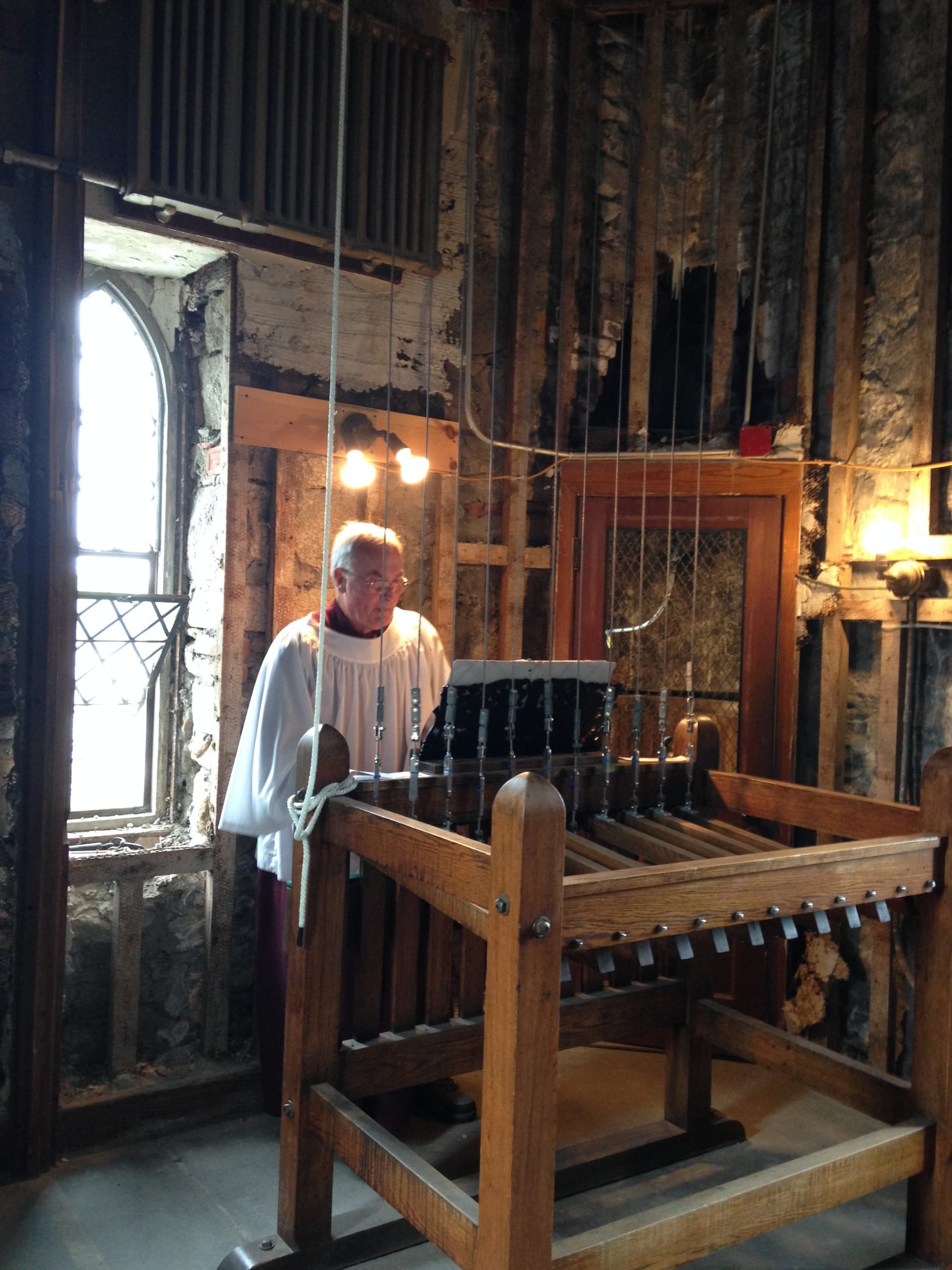 Every Tuesday evening for the past 10 years, Bruce Dearnaley has prayed at the altar of St. Luke’s Episcopal Church, climbed the spiral staircase up to the church’s distinctive spire, pulled out his sheet music, and played the church’s chimestand.

He often plays the chimes on Sundays after church services so parishioners can hear the echoes of hymns as they leave, but right now he’s practicing his favorite piece, a Christmas carol called, “In The Bleak Midwinter.” He uses just the right pressure on each lever, and plays slow and solemn, for this piece. The bells’ ringing fills the air, enveloping the spire in sound. Dearnaley appears at peace as he plays.

The chimestand has 11 levers, and when one is pushed it pulls a string to ring a different bell. Dearnaley has labeled each lever with the musical note it plays, and he has about 100 tunes in his songbook, secular and sacred. But the chimestand is something of a rarity for most churches these days; it uses real bells when many other churches use electronic chimes or no chimes at all. Dearnaley believes the real bells give the church character that can’t be imitated.

“It’s a chimestand that can put forth beautiful music to be heard by the entire community,” Dearnaley said. “The sound is owned by the people out there. And it’s only me sending it out for a nanosecond of time.”

The St. Luke’s spire and its chimestand were installed 98 years ago, according to Dearnaley. He said the only other churches nearby he knows also play real bells are Grace Episcopal Church in Providence (where Dearnaley has played before), a church in Central Falls, and a church in Westerly, although he did not know how often the latter two ring their chimes.

The St. Luke’s chimes were restored in 2012, and then-music director Priscilla Rigg asked Dearnaley to play the bells after services. The chimestand had been played infrequently in the years leading up to that restoration, partly because of some water damage to the tower. Many parishioners didn’t even know the chimestand was there, Dearnaley said. There were, however, some special moments of bell-playing in those quieter years. Parishioner Gerard (Jerry) White would play the chimes every year after the Memorial Day Parade, up until his death in 2007. And, parishioner Laura Sullivan recalled a particularly poignant playing of the chimes.

“I especially remember the Sunday following the Station Nightclub Fire in 2003, when Governor Carcieri asked churches to ring their bells 99 times, honoring those who had lost their lives to the tragedy. I, along with Jerry, and perhaps Rosemary Stitt and Bruce Stevens, were up there to take our tolling turns,” she recounted. “When we arrived home, we learned that a 100th victim had been added to the count.”

Dearnaley has some musical training, singing and playing guitar. He sings in the church choir and in an a capella group, and plays guitar and sings with The Three Amigos, a trio that came out of the St. Luke’s choir. Yet Dearnaley was “paranoid” about making mistakes when he first started playing the chimestand, so he labeled each bell’s lever with its corresponding note and initially practiced by pressing on them so lightly no sound came from the bells. Eventually, Dearnaley found his groove through hard work.

“What I lack in ability I make up for with perseverance because no one’s granted unlimited ability,” Dearnaley said. “[When people ask] ‘How do you do all these things?’ [I say] I will myself to do it by practice and [putting] in the time.”

Dearnaley said he finds inner happiness when playing the chimes, explaining that there’s no feeling like being up alone in the bell tower practicing as the sun sets. But the bells have impacted the community just as much as the performer.

For example, a man Dearnaley knew who has since passed away and was a patron of the church, lived within hearing distance of the bells. When the man developed lung cancer, he took solace in listening to the church’s music.

“He would say to his wife, he said, ‘Honey, bring me into the living room and open up the two windows and let me lay on the couch and just hear this bell music,’” Dearnaley said. “His wife came in and told me ‘You don’t know how much he looks forward to that each day, which is usually filled with pain and agony and infusions and transfusions and chemotherapy and all that. He gets a chance to sit back and just close his eyes and listen.’”

The COVID-19 pandemic made the need for joy greater than ever. Even at the height of the lockdown, Dearnaley came  every Tuesday to  play the bells (he says he practices on Tuesdays and plays on Sundays, but from the ground, it all sounds like beautiful music), allowing people nearby to hear the bells even during the loneliest days of the pandemic. He says those times were partially for his own peace  of mind and partially to prepare for the church’s eventual reopening.

“I was up here all by myself and I played an hour and 20 minutes with the Christmas songs,” Dearnaley said. “Because I said this will not be looked at as a dead dying forgotten parish. It’s a vibrant parish. We’re still alive, we’re still doing things. COVID has limited it … but that was one of the most meaningful nights. It took a somber, sad, desperate, desolate time, and changed the church into being alive.”

It’s memories like this that make him want to play “until the day [he] dies.”

Because Dearnaley has labeled each chime with its note, whoever takes over after him can learn how to play just as he did. At the end of the day, Dearnaley says, it doesn’t matter who is playing the chimes. The music is what matters. A 1923 editorial from the Rhode Island Pendulum, published after the chimes were first installed, summarizes Dearnaley’s views best: 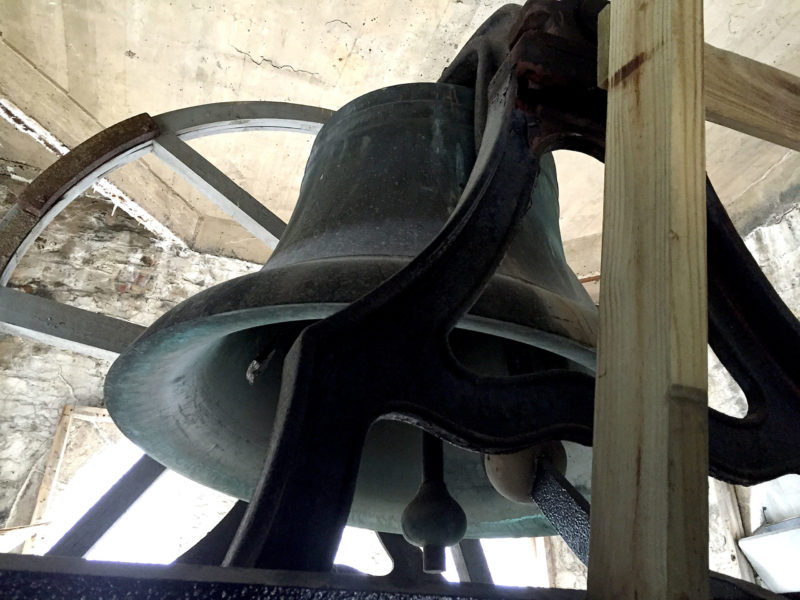 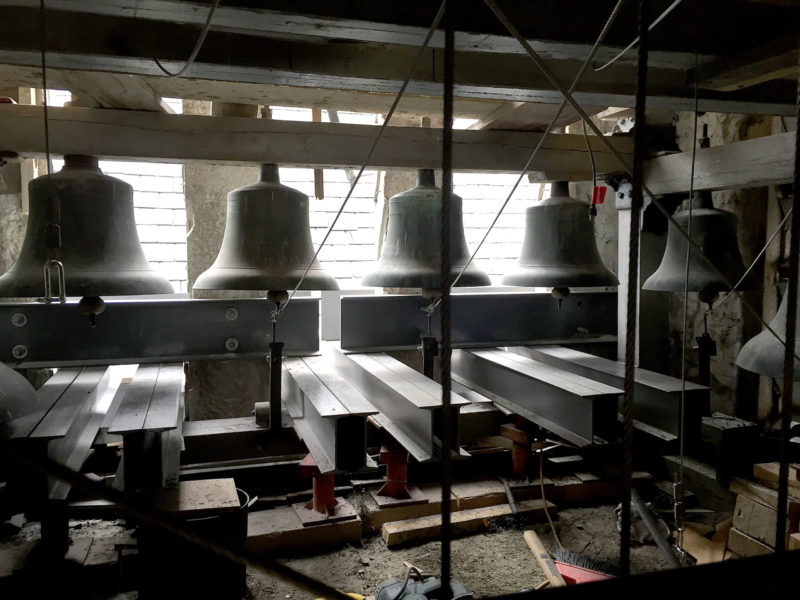 The chimes and bells of St. Luke’s. Photo by Rob Walsh