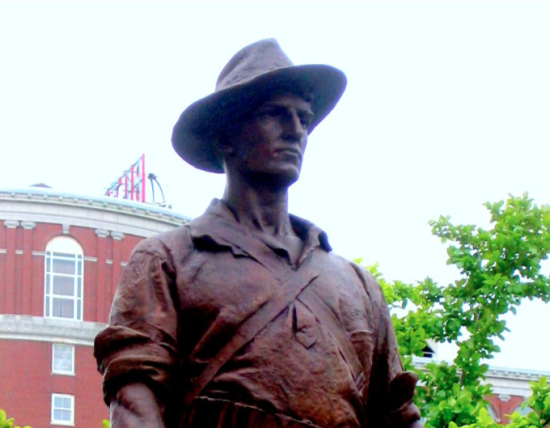 Above: A bronze statue in Kennedy Plaza in Providence honors Rhode Islanders who served in the Spanish American War. Credit: Donald Tunnicliff Rice

On February 15, 1898, the battleship USS Maine exploded in Havana Harbor killing 266 American sailors – around two-thirds of those on board. The cause of the explosion is still being debated today, but at the time the popular press had no trouble convincing the American people that Spain was the culprit. For a variety of reasons, mostly involving Cuba, the two countries had been drifting toward war for some time, and the destruction of the Maine made armed conflict inevitable.

On April 23, President McKinley issued a proclamation calling for 125,000 volunteers to serve in the coming war with Spain. Each of the (then) 45 states was authorized a particular number of units. In Rhode Island there were three: the 1st Rhode Island Volunteer Infantry and Light Batteries A and B, Volunteer Artillery.

In total, 46 officers and 958 enlisted men were mustered into the infantry regiment at Camp Dyer (named for then-Governor Dyer) at Quonset Point during May 1898. I’ve been able to identify just a few East Greenwich Townies in the regiment: Harris Ralph, Matthew Whelan, Thomas Regan, and Peter Henchey. There were surely more, including some among the 220 men in Light Batteries A and B, who also mustered in at Camp Dyer.

In her history of East Greenwich, Martha McPartland lists the names of 21 Townies who served during that time, but unfortunately she offers no citation for this information, and I could verify only the few names listed above. Elsewhere she mentions that 18 members of the Kentish Guards served during the war. That ancient and honorable organization was put on alert because of an imagined threat to the Eastern Seaboard by Spanish naval forces, so I suppose it’s technically true.

In spite of their earnest desire to avenge the sinking of the Maine, the soldiers of the 1st Rhode Island Volunteers were never sent to Cuba. They did, however, get a lot of practice setting up camp as they moved to Camp Alger (Va.), Thoroughfare Gap (Va.), Camp George Meade (Penn.), and finally Camp Formance (S.C.), where they were disarmed on March 1, 1899 and mustered out on March 30. From there they were shipped by train to Jersey City (N.J.) where they were put on a steamer that carried them back to Narragansett Bay.

After disembarking at India Point Wharf, they paraded to downtown Providence. Their last stop was at what is now called Dexter Training Ground where they disbanded and found their way home without ever having fought a single Spaniard. Though never in battle, they did suffer a number of casualties, including 10 deaths due to disease, a common occurrence during the war.

Light Batteries A and B never left Camp Dyer at all and were mustered out six months after being mustered in. The only Rhode Islanders who we know for sure came under fire during the war were those aboard the repair ship, USS Vulcan. There were probably a few more among the 1,000 or so who served with regular army and naval forces at that time.

When I was a kid there was an ancient veteran named Clarke Wells* who used to march in most East Greenwich parades. In his last years he rode in a car. I forget what his uniform looked like, but I’m certain he wore a helmet with a spike, such as those we normally associate with WWI Prussian soldiers. American spiked helmets were issued from 1880 to 1890 and are extremely rare, but I think I remember seeing one years ago in the Varnum Armory collection. Perhaps it was Wells’s.

Anyway, we were told he was a Spanish-American War veteran, so I suppose he was, but I haven’t been able to verify that. The fact that he would have been over 30 years old during the war makes it a little doubtful. He could have been an officer, I guess, and maybe that’s why he had such a spiffy helmet. Does anybody know?

Another well-known East Greenwich resident – Dr. Fenwick Taggart – served during the war, but with the First Vermont Volunteer Infantry, Vermont being his home state. He also never made it to Cuba. But if you are one of the 2,500+ East Greenwich area babies he delivered, or one of the countless hundreds of patients he treated over the years, you were acquainted with a Spanish-American War veteran. Bet you didn’t know that.

Editor’s note: Rachel Peirce from the EG Historic Preservation Society shared this article about Clark Wells from the EGHPS Packet (ThePacketNewsletter_June2017 – go to page 3), an article from the Pendulum about his 106th (!) birthday and well as a parade photo (both below). Thanks, Rachel!

Memorial Day Parade in East Greenwich. You can see Clark Wells in that distinctive helmet. Photo courtesy of EGHPS 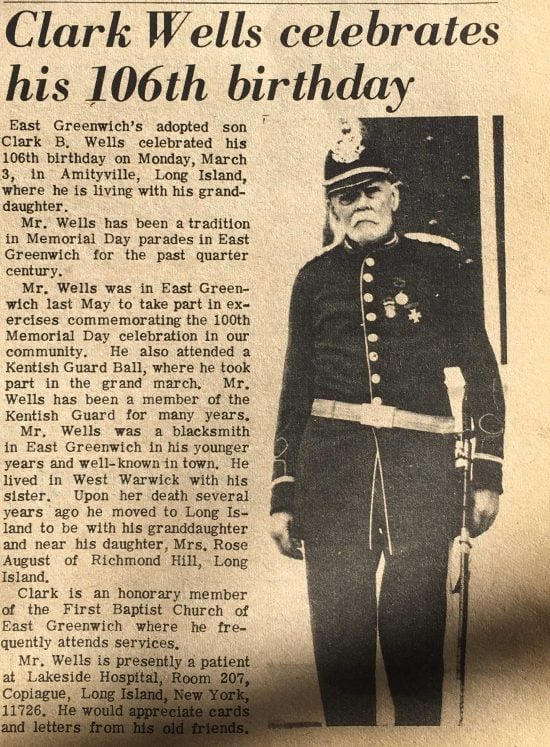