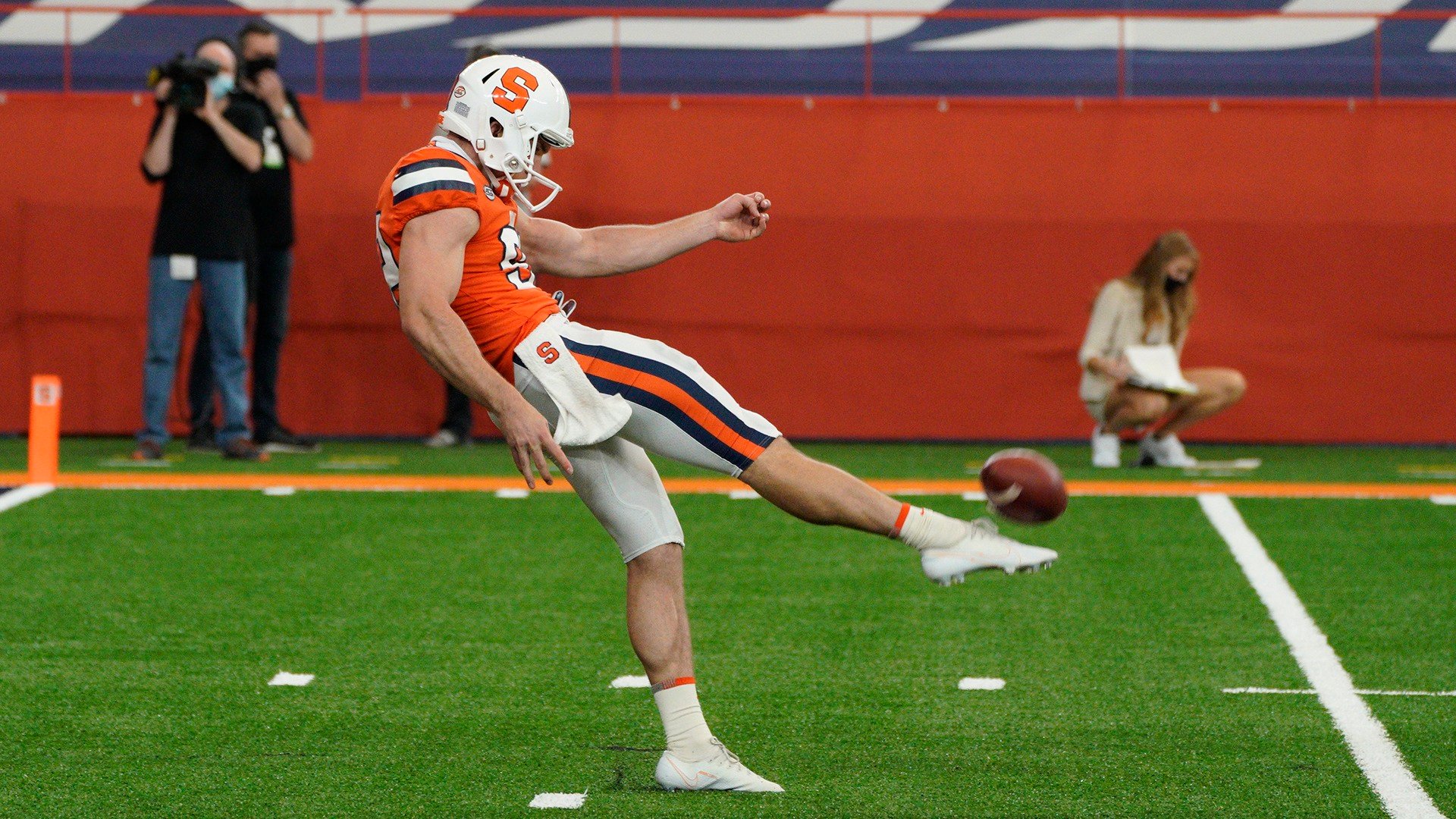 Above: Nolan Cooney, kicker for Syracuse.

Though many people who are newcomers to this state do not really know this, Rhode Islanders have appeared in the NFL from the start of the league to the present day.

Hank Soar, Monk Maznicki, Jim Mello, Dom Panciera from a time ago to Will Blackmon, Jamie Silva, Mark Van Eeghan of a more recent vintage all wore the uniforms of NFL squads.

This year at least 3 Rhode Islanders may have a chance of either getting drafted or signing a free agent contract with an NFL team.

Kwity Paye (Bishop Hendricken, Michigan) is probably the most talked about and he could go high in the draft. Denver, Detroit, Minnesota are among the teams mentioned as having an interest in the 6-4 277lb, who is likely to garner All Big 10 honors, and possibly, All American. He already has won numerous individual, team and Big 10 awards, and will give the team that drafts him a good edge rusher who can also stop the run.

East Greenwich’s Nolan Cooney (Bridgton-Syracuse ) would be a good find for the local Patriots. he can offer Coach Belichick 5 positions for the cost of one player. Cooney punts to the tune of 45 yards per kick, kicks off, holds for PAT’s and FG’s and can also kick points after and field goals if it is needed.

St. Raphael’s graduate Tre Jones has already been a big part of the Blue Devils resurgence and at 6-4, 255 can play both outside and inside linebacker. His play helped CCSU to their first FCS playoff berth and also got him named captain as a junior.

Division 3 doesn’t get much attention usually, but the NFL has people all over now and there are a few players on NFL rosters and practice squads from D3 and D2. 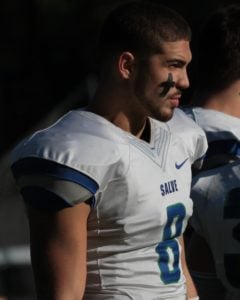 That being said some scouts should take a look at East Greenwich’s Matt Sylvia, a 6-1 200 safety at Salve Regina. He led the nation in interceptions for most of the 2019 season and was named All Conference, All new England and All East.

Waiting for their turn are underclassmen like Xavier Truss (Hendricken, Georgia). At 6-7 and 330 he is a big mass of deterrent to pass rushers and is getting better as a rush blocker.

Harrison Leonard (Avon Old Farms, Notre Dame) may also get some consideration down the road. Matt Gacioch, a 6-4, 215 QB (Tiverton, UMassDartmouth) has transferred to URI and may get a chance to play for two years. he set all kinds of records at UMD and if he continues at Rhody might be a good pickup.

So keep your eyes open this spring when they start calling names. There might be a couple of Ocean Staters up on that stage and putting on the hat and holding an NFL jersey.

* This press release courtesy of Providence Gridiron Club, promoting football at all levels in Rhode Island.