Rhode Island Has These Cemeteries, You See… 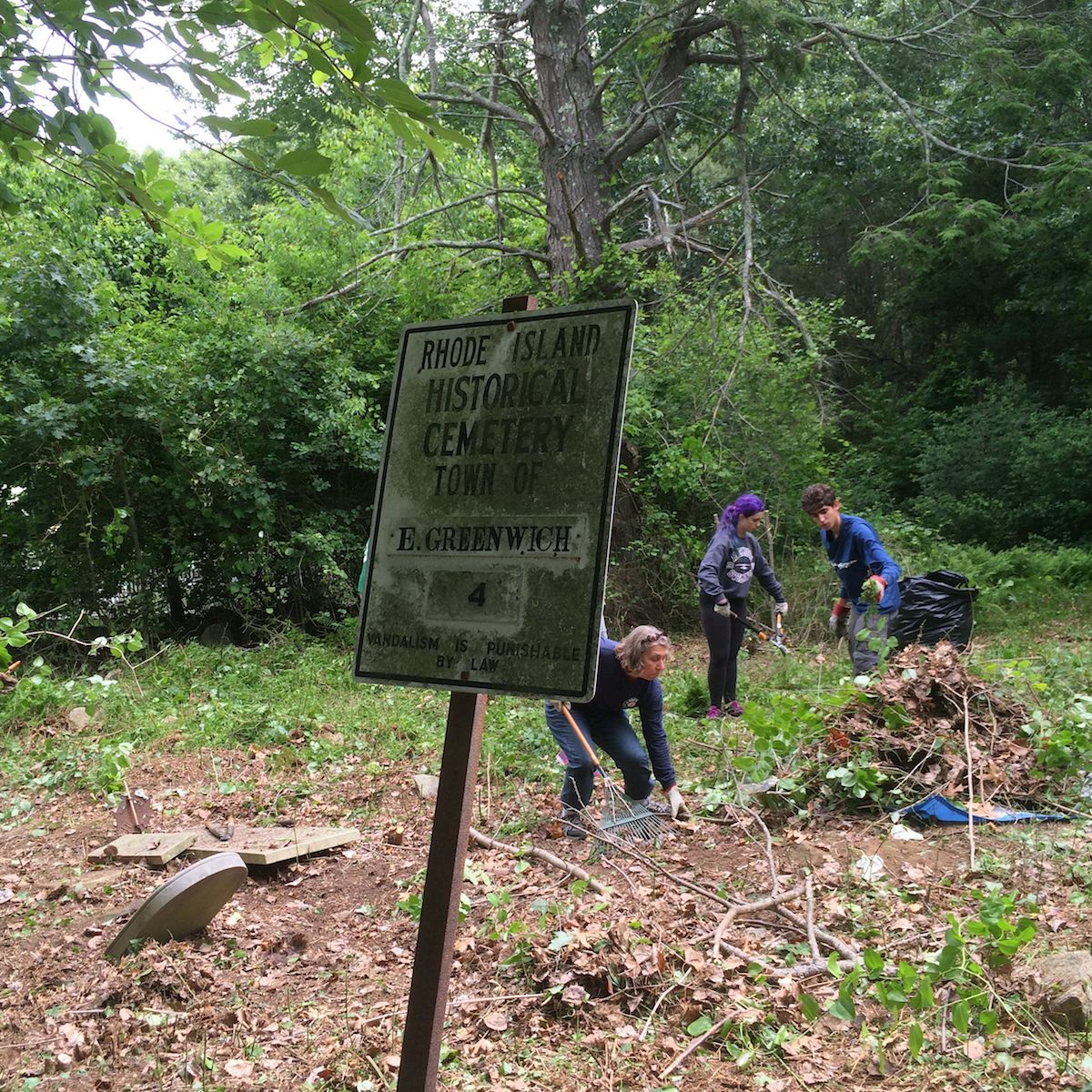 Above: Volunteers clean up a long neglected and vandalized cemetery previously hidden in the woods amid a new section of houses. It’s easy to understand why someone new to the area finds these places hard to look at. Historical cemeteries can, however, add historical significance to a neighborhood if gravestones are placed upright in a row and encircled with an iron fence or stonewall. People come from all over to visit the graves of their ancestors.

What you should know about them 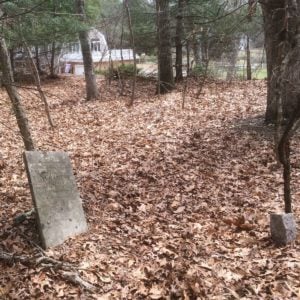 A single misplaced gravestone for Martha Potter, d. 1845, leans against a tree in a rural East Greenwich graveyard. An infant daughter of the Shippee family might be under the smaller stone. Someone a long time ago thought he had a better use for the other 10 to 15 gravestones so he took them away. If you have a patio or walkway that looks like it’s made of gravestones, there’s no penalty if you aren’t the one who put them there. Please notify the Cemetery Commission. It’s the right thing to do.

People moving into Rhode Island from other parts of the country are probably not aware that it is a very peculiar place, peculiarity being one of our most important cultural assets. The state’s founder, Roger Williams, had some very strange ideas for his times – several were quite good and found their way into the U.S. Constitution. Some of our early notions weigh heavily upon the shoulders of the newly arrived. Newcomers will learn fast to just accept things but one thing everyone should learn about at the get-go: our backyard cemeteries.

You might buy a piece of property beneath which lie the remains of the earlier people who lived on that land. Early Rhode Islanders buried their deceased family members upon the property where they lived. Up atop a nearby hill, down alongside the road, just the other side of the dooryard. This was farm country and farms came before villages. As the farms gave way to modern housing developments, there was one asset of the property that could not be moved, altered, or covered over: the cemetery. It is there and it will always be there. You cannot legally put anything within 25 feet of it, no pools, no garden sheds. It is sacred ground, spiritually and legally.

So you buy a residential property in East Greenwich. After you have moved in the furniture and the dust has settled, you go out to peruse the yard and you find a few round stones all lined up in a row… or three… and there is a faded sign on a post that says it is an historical cemetery. Often there are no gravestones with peoples names on them, just round fieldstones. The town might not even know who resides beneath, but whoever they are, they rest in legally-protected peace. You should have been told of such things by your real estate agent but until recently few paid attention to cemeteries. They were not a problem until former farmland became house lots.

Today, real estate people are told to advise potential buyers of local properties with graveyards on them that they have the right to be there for eternity and the best you can do is accept that and tend to them along with other yard work. You don’t have to. You have no responsibility for them other than tending to them if you choose to do so. We hope you do. Laws have been enacted making such cemetery property tax-free for the landowner. These are recent and it falls upon the landowners to contact the town for potential cemetery tax relief.

In the best of circumstances our old graveyards are neat and tidy and just mildly overgrown with a few native wild plants. Most, however, are untended, covered with briars, and more than likely vandalized. In any event, if you can see it from your back door and it is ugly, no one in their right mind would object if you want to honor those beneath and tidy it up. In fact, the town has a cemetery commission to help you do just that. There are 95 cemeteries found in East Greenwich. Two are municipal, several are church-owned cemeteries, but that leaves a whopping 80 or more scattered all around the town, often showing up in the middle of a new housing plat. There has been an effort by the town to make caring for the cemeteries the job of any developer who wants to build several houses on a piece of property. Naturally this requirement is passed on to those who buy houses in those plats, often on sales agreements. East Greenwich has not been a staunch advocate for enforcing those requirements, but things might be changing.

This well-maintained cemetery on Cedar Avenue is one of the few the town takes care of by some ancient arrangement. Its gravestones are upright and aligned. With a beautiful surrounding wall and an attractive ground cover of lawn and ferns, it’s one of the few historical cemeteries in East Greenwich that we can be proud of. This photo shows an old sign. All 95 cemeteries in EG will have new signs by the end of year.

East Greenwich is an historical town, it says so on its welcoming signage. People who settled here in the pre-Revolutionary days, in clearing the land, moved all those stones from the middle of their fields over to the sides and that’s why we have these wonderful old stone walls so much in vogue today. But the people who moved those stones are now buried beneath them. They had hard lives, lots of work, few joys. In their graveyards are many infants and children who died much too early to enjoy the lives they were borne into. The sons and daughters of East Greenwich settlers went out into the world and settled the rest of this country. Their ancestors are buried here and quite often their descendants come back to view the family graveyards. It would be nice to actually be proud of the condition their cemeteries are in. Most often there’s not too much to be proud of.

If you have questions about graveyard on your property or in your neighborhood, please feel free to get in touch with:

This well-maintained cemetery on Cedar Avenue is one of the few that the town takes care of by some ancient arrangement. Its gravestones are upright and aligned. With a beautiful surrounding wall and an attractive ground cover of lawn and ferns, it’s one of the few historical cemeteries in East Greenwich that we can be proud of. This photo shows an old sign. All 95 cemeteries in East Greenwich will have new signs by the end of year.