Shakespeare’s A Midsummer Night’s Dream is a romp through the woods filled with equal parts love and foolery. The foolery is undertaken to wreak havoc on the lovers and the ensuing confusion causes much merriment. The result, in the Gamm Theatre production now playing into early June, is an athletic, laugh-out-loud play that offers the actors a chance to revel in silliness.

After two-plus years of Covid, the merriment was just what the doctor ordered. Though Covid did cast a bit of a shadow, with the first several performances needing to be canceled after an infection among the cast. As a result, the Gamm has added a couple of shows to the run.

This play layers three different worlds: the court of ancient Athens, the fairies (faeries) and the clowns. The basic story is this: Theseus, the duke of Athens, is soon to marry Hippolyta, queen of the Amazons. Four young members of the court are caught up in a love mismatch: Hermia’s father has promised her to Demetrius, but she and Lysander are in love, and poor Helena loves Demetrius, who loves Hermia. You follow? Don’t worry. It only gets more wonderfully confusing from here!

We meet the “faeries” – Oberon, king of the faeries, and Titania, queen – and the rest of their crew, including the mischievous Puck. Here too a mismatch, with Oberon jealous at Titania’s affection for a “changling” (in this play, a baby elephant), so Oberon enlists Puck to play a trick on his queen.

And then there are the clowns, the amateur players, who hope for some gold from the duke and his bride in exchange for their performance of the story of star-crossed lovers Pyramus and Thisbe. This story line features one of Shakespeare’s most unforgettable characters, Bottom the weaver, a ridiculously self-important fellow played here to delightful comic effect by none other than Gamm artistic director Tony Estrella. Fairy magic turns Bottom into a literal ass and then more magic makes him Titania’s love object.

Marc Pierre seems born to play Puck, relishing his mischief. Oberon and Titania are played against gender, with Deb Martin as nimble Oberon and a bearded Michael Liebhauser as a tender Titania. Both are wonderful.

Of the young lovers, suffering Helena (first because she is unloved and then because she is too loved) stands out for her comic timing. Lysander and Demetrius bring delight when – after being  bewitched – they compete for Helena’s affection.

The players – Bottom’s compadres – are first rate, with Zachary Gibb’s Francis Flute/Thisbe offering particular delight. Their rendition of Pyramus and Thisbe was ridiculous in just the right way.

The performers make the most from the pared down set – tumbling, climbing, spying, wooing, and crawling across the stage in their thrift-store Athenian garb.

Fred Sullivan, Jr., known for his comic portrayals at Trinity Rep and other stages, directed. Photo by Trinity Rep By Carla Molina Growing up in proximity to the Big Apple, the Rockettes was... 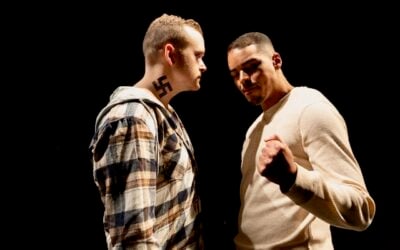