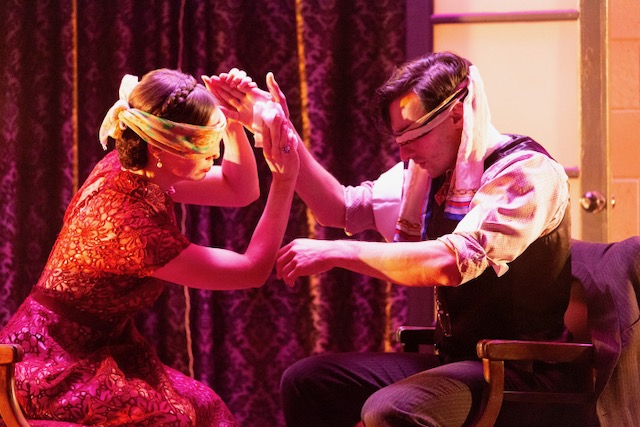 Above: Donnla Hughes as Yevgenia, Michael Liebhauser as Isaac. Photo by Cat Laine

The Gamm Theatre has opened its 38th season with a remarkably timely production of Describe the Night by Rajiv Joseph and directed by Tony Estrella. It would be hard for it to not to feel topical since one of the characters is Vladimir Putin, but the throughline to the U.S. today on the nature of truth makes it particularly relevant.

The play opens with Isaac and Nikolai, reporter and soldier, respectively, during the Russian-Polish war of 1919-20, with Isaac trying to describe the night for his journal. Nikolai, a bully, tries to intimidate Isaac but Isaac manages to charm Nikolai and ends up teaching him the finer points of lying.

Isaac is based on Isaac Babel, famed Russian Jewish writer, and Nikolai is Nikolai Yezhov, a confidant  of Stalin – until he wasn’t.

By weaving their stories together and taking some liberties with the … truth, the play is able to link that war with the Great Purge (1936-38), the fall of the Berlin Wall (1989), and the suspect downing of a plane in Smolensk, Russia (2010), that killed the Polish president and several other high government officials.

In our own era of “fake news,” it is almost dizzying to realize how universal misinformation is. And what a staple it was in the Soviet Union and now is again in Russia. And, because the actors speak with American accents, it is easy to forget we aren’t talking about the U.S.

Except for that Polish soup (about which you will have to learn yourself!). 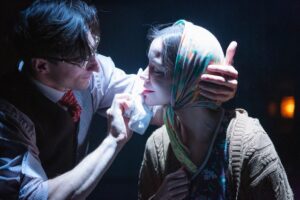 The play is funny and heart breaking. The simple set highlights the excellent acting. Scene changes take place naturally, and sometimes tenderly. Michael Liebhauser’s Isaac is indeed a charmer, and Sean McConaghy as Nikolai offers just enough menace to keep the audience from relaxing when he is on the stage, even as he makes us laugh. Donnla Hughes, who was fantastic as Darja in last season’s Ironbound, is back without an accent this time, playing Yevgenia.

The scene between a pregnant Yevgenia and Isaac in the asylum where Yevgenia has been committed is rendered beautifully. The pair describe her dreamed-for escape (which involves Isaac playing the cello – why not? – in the woods so she will be able to find him). And they talk of their future child: “She will know words, the weight of them, fjords, fish, and tea.”

In real life, all three characters are dead by 1940 but in the play Yevgenia lives on. And she meets Vova, played by Jeff Church. He eats Yevgenia’s soup and the physical comedy that ensues is wonderful. It’s almost enough to make you feel some sympathy for Vova/Putin. Almost.

Gabrielle McCauley as Urzula, who escapes with the fall of the Berlin Wall, is very appealing. And we could feel the desperation of both Sophia Blum’s Mariya and Dan Garcia’s Feliks – caught in the wrong place at the wrong time (Smolensk in 2010).

The play offers no happy ending. Just a human one.

Describe the Night plays through October 9. Get tickets and more information at the Gamm Theatre website HERE. 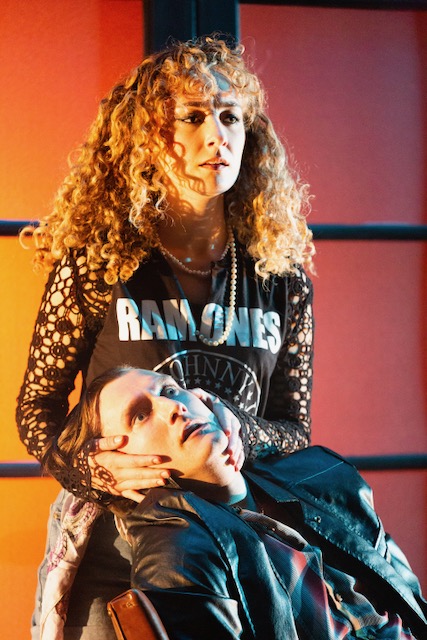 Jeff Church as Vova and Gabrielle McCauley as Urzula. Photo by Cat Laine 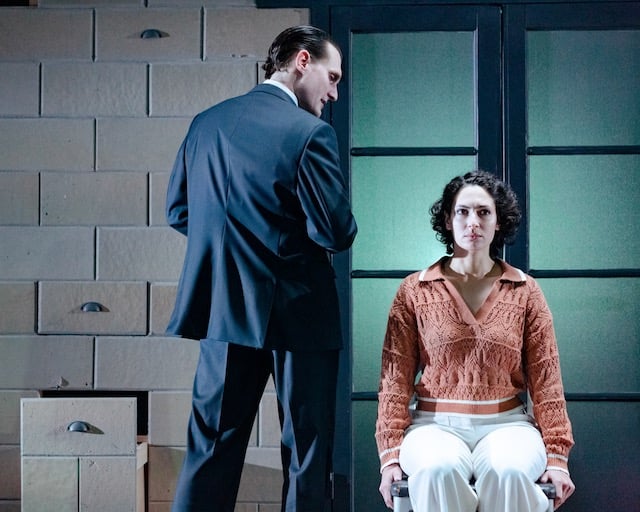 Jeff Church as Vova and Sophia Blum as Mariya. Photo by Cat Laine