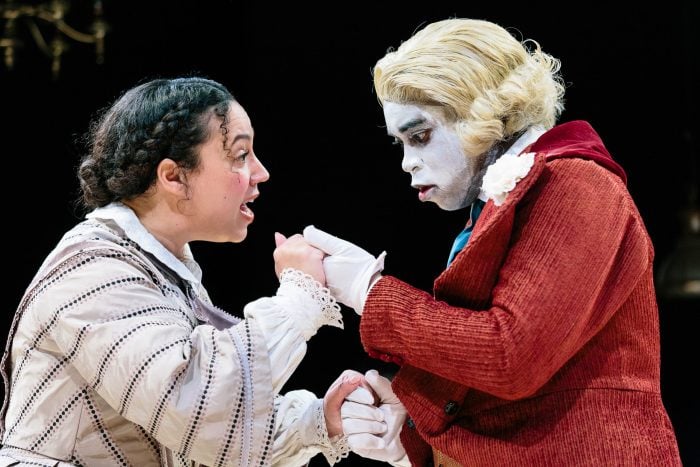 Above: Shelley Fort as Zoe and Marc Pierre as George in The Gamm’s ‘An Octoroon.’ Photos courtesy of The Gamm Theatre.

The Gamm Theatre’s “An Octoroon” is a 19th century play reconfigured with a 21st century sensibility that somehow compresses time and history to create a play that’s laugh-out-loud funny, achingly tragic, and a call to action. 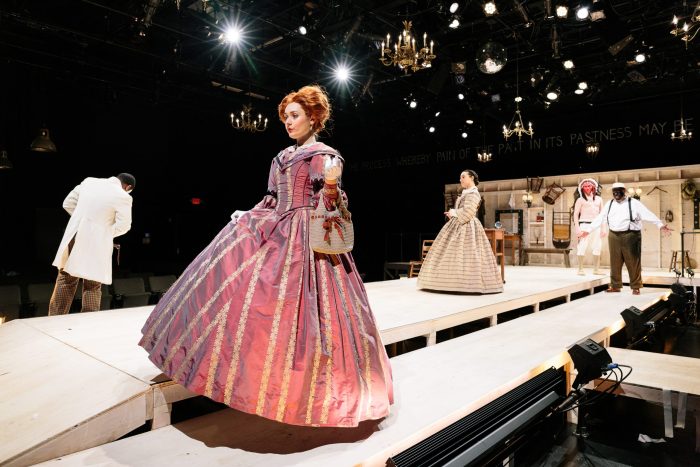 How does it do all this? I have to admit, at the start I had my doubts. The play begins with the two playwrights – the 19th century Dion Boucicault and the 21st century Branden Jacobs-Jenkins – in a tug-a-war of sorts. Jacob-Jenkins tells the audience of his struggles with depression and how his therapist recommended he write his way out of it. But after finishing the play (Octoroon), he struggles with staging it. That’s when Boucicault enters the scene, lamenting the changes to theater in the 150 years since his plays ruled the stage.

Jacob-Jenkins, played by Marc Pierre, who is Black, applies white face, and Boucicault, played by Jeff Church, who is white, applies red face. “An Octoroon” plays like this with race throughout the production, which, after all, is centered around an octoroon, a term used in the 19th century (and beyond) to describe a person who is one-eighth Black.

The two playwrights’ at times volatile exchange – warning: f-bombs fly – sets the scene for the actual story, a melodrama telling the tale of Terrebonne, a Louisiana plantation where the owner Judge Peyton has recently died, and his nephew, George – played by Pierre – arrives as the heir apparent. Alas, the plantation appears to be in financial distress, offering the necessary twist.

George immediately falls in love with Zoe (played by Shelley Fort), the octoroon of the title. Though owned by the family, because of her beauty and (presumably) fair skin, Zoe has been treated as a member of the owner’s family.

M’Closky, the evil overseer (also played by Pierre), wants Zoe for his own and he contrives through a series of misdeeds to take control of the plantation and Zoe. Throughout, the actors serve up caricature and true drama, with a slave auction, the death of a young slave boy, and casual asides about the indignities of slave life. Jacob-Jenkins is playing with both sides of the coin and the audience is in on the joke. Except, of course, it wasn’t and isn’t a joke, as director Joe Wilson, Jr., makes clear when, before the climactic scene, a TV is brought out and we see on the screen that the past is not really past.

Pierre and Church juggle their three roles well, Pierre in particular during a spectacular fight scene in which his dueling roles of George and M’Closky fight each other. It was a tour de force.

The staging was simple, with a surprisingly effective cotton “field” created on one end of the theater. And a mysterious, kind of spooky Brer Rabbit character inhabited by Angelique M. C’Dina, who wafted through every now and then as if to remind us all is not as it appears.

One caution: The n-word is used throughout the production, along with other profanities.