Return of The Spoon Game 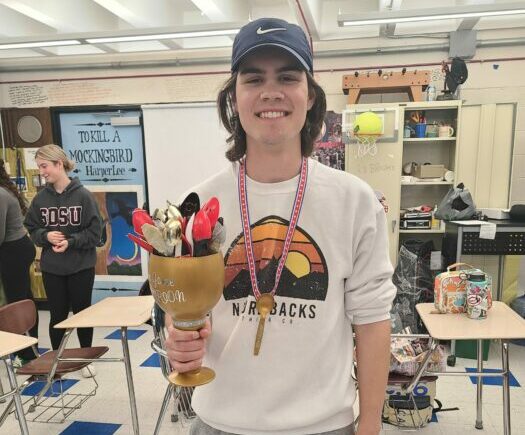 If you were to walk into East Greenwich High School after March 1 this year, you might notice something a little strange: students holding plastic spoons. Loved by students but detested by some teachers, the Spoon Game has been a long-standing tradition at EGHS. It serves as a fundraiser for the school newspaper “The Spectrum,” from which juniors and seniors buy plastic spoons to compete for two prom tickets.

The game itself consists of a series of elimination rounds where students must make sure they have their spoons on them at all times to avoid being tagged out by other players. It requires students – who are each assigned a target – to follow that target in and out of school to hopefully “tap them out” when they don’t have their spoon on hand. The nature of the game had unfortunately made it another victim of Covid restrictions but after a two-year hiatus, the game began again this year, with a new set of rules. Spectrum advisor Marc Brocato and the editors, Ana Chelizde and Morgan Walsh, chose to include the “mask clause” in the rule book. It allowed any player to eliminate another who had their mask down or was wearing it improperly during school during the few weeks mask restrictions were still in place when the game was running.

Round 1 began first thing Tuesday, March 1, with the 211 students who had purchased spoons. For this round, competitors had to tap their target out (and not be eliminated themself) during a two-week span in order to continue. Competitors quickly got to work, some removing not only their own target but their target’s target. As days went on and stakes got higher, simply forgetting their spoons at home led students to believe that they might as well surrender to their hunter.

However not all players were focused on the competitive aspect of the game – some chose to outrageously decorate their spoons. The rule book states that students can cover their spoon however they like, as long as it is still visible as a spoon. Sharpies, glitter, or ribbon are all acceptable ways to turn spoons into miniature artworks. Duct tape could be considered more of a necessity than a design option. As the game progressed, students’ spoons often broke, and since they are only allowed one spoon, their only option is to fix it themselves or carry around both halves.

Following round one, contestants moved on to a free-elimination round where all remaining spoon game participants could eliminate any participant who did not have their spoon. This was followed by a scavenger hunt week, where contestants needed to follow clues hidden in plastic eggs around the school, and the final 25 proceeded to a bottle round, where spoons were traded in place of 2 liter factory-sealed bottles. Normally this would call to mind soda bottles, though some contestants got clever with their bottle choice and opted for olive oil bottles with handles.

On the Wednesday before April break, the final 13 players were to compete in the Spoon-Olympiad. The Spoon-Olympians played five games to decide the winner.

The first event was a spoon javelin throw, in which all 13 players stood in line and threw their spoons down the hallway of the English department, and the 2 players whose spoons went the shortest distance were out. There were some standout performances, such as junior Connor Straut, whose spoon appeared to go the farthest but was stymied when an unsuspecting passersby picked it up. Connor then had to rethrow his spoon, where it fell a bit short of the original throw.

Abby Lewis, a junior, also had a memorable toss as she threw her spoon the highest but the shortest distance, since her spoon hit the ceiling sending it in the opposite direction. In a similar circumstance to Connor’s, her spoon was also picked up by a student who did not know it was for the spoon games, allowing her to rethrow and save her spot in the game. The players who lost in this round were senior Julia Xu, who had unfortunately memorized the height of the tallest spoon for a trivia round she would not take part in, and fellow senior Georgia Wood.

The spoon javelin throw was followed up by musical spoons. Contestants were split into two groups, one at a set of four desks and another at five and each having one less spoon than the number of players. Mr. Brocato played music and when it stopped students had to reach to the center of the table and grab a spoon. There were two caveats though. Students could not touch the spoon before the music stopped and if a spoon broke from contestants fighting for it, they would both be out. To make it fair to the kids who competed in the group of 4, there was a second-round for the group of 5. During the second round, Lily Shaughnessy and Annie Volpe were both eliminated as they broke a spoon, leaving 7 players remaining.

Returning to the hallway, students began the egg race, which had them run down the length of the school, around a chair, and back. They used chocolate-covered egg-shaped marshmallows to avoid a messy clean-up. If they dropped an egg during their run, they were forced to start the course again. Abby Lewis was in the lead at the beginning of the race but dropped her egg a few feet from the finish and was forced to restart. She was joined by senior Gerardo Santizo and junior Annalee Ambler who also dropped their eggs, leading to a heated final sprint between the trio. In the end, Gerardo beat out Annalee and Abby heading to the next round.

The following Kahoot round would decide the final three contestants. Junior Matthew Friedman and seniors Sean Picard, Evan Macaulay, Gerardo Santizo, and Max Reed played a spoon-trivia game on the popular quiz site Kahoot. A picture of a certain type of spoon would be on screen and it was up to contestants to select the correct answer as fast as possible. Max Reed, Evan Macaulay, and Sean Picard finished top 3, however, the Kahoot results would not be what had determined their final rankings.

Throughout the spoon game, players collected each other’s spoons when they eliminated each other. By the spoon-olympiad, many players had amassed a good amount of spoons and were asked to bring in their spoons. Every time a player was eliminated in the spoon-olympiad they were asked to pick any remaining player to give their spoon(s) to. In the end, Sean Picard gave his spoons to Evan Mcaulay, giving him 21 and tying him with Max Reed who also had 21 spoons. The tie came as a shock to the judging committee (the editors and Mr. Brocato). In an effort to come to a fair decision it was suggested that Sean drop all 42 spoons on the ground between Max and Evan and whichever one of them could pick up the most spoons would win. However, just before Sean was about to drop the spoons, Max reached into his pocket and pulled out a spoon. It was the spoon of his first target, Aly Kasmir, and he had used the spoon during the egg run as it was in the best condition since he received it early in the game. Reviewing photos taken, it could be seen that the spoon had not been among the ones counted and Max became the winner of the 2022 East Greenwich High School Spectrum Spoon Games.

If you are interested in reading the full set of spoon game rules can be read on The Spectrum website using this link: http://spectrumeghs.com/spoon-game-rules-2/ Maddie Siedliski with her spoon. 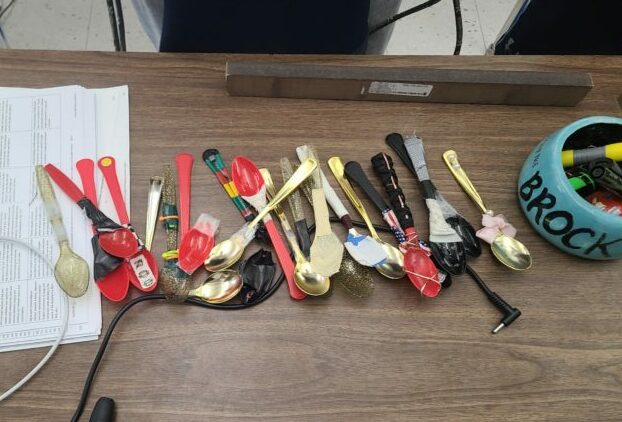