Rep. Langevin on Cyber Threats Big & Not Quite As Big

Jim Langevin has made cybersecurity a top priority during his 18 years as a member of the U.S. House of Representatives. Which is not where he thought he was heading when he got involved on a subcommittee addressing security issues.

“I thought we would spend most of the time looking at weapons of mass destruction and things. But I got a briefing one day of a cyber vulnerability to our critical infrastructure and the electric grid that could cause the country to be completely shut down,” he said during a recent interview.

“That was my first introduction to how a cyber attack could cause physical damage.”

It was so eye opening, Langevin stepped into a leading role on the issue. In the years since, he founded the first Congressional Cybersecurity Caucus in 2008. He introduced the Executive Cyberspace Coordination Act in 2013. And he served as a co-chair of the CSIS Commission on Cybersecurity under President Obama. 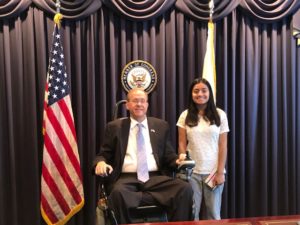 Most of us only think about cyber security in terms of our personal information, identify theft, and company/customer hacks. To be sure, those are problems. But they pale in comparison with the nation-crippling attacks Langevin focuses on.

Keeping the government safe from cyber attacks is a big job. But it’s only a part of the picture. Langevin said the real challenge is getting private companies (like Target, like Sony Pictures, like Equifax) to listen when government agencies point out vulnerabilities are suggest improvements. The public and private sectors must work together, Langevin said.

As Rhode Island’s former secretary of state, Langevin also knows how important it is that elections are secure.

“There’s a state component and a national security component,” said Langevin. “The FBI has a role [in the election]. The state has a role.”

When asked if he considered elections to be secure, Langevin said, “Yes, but the Russians want to interfere. They use social media against us. The Russians widened the divide between Democrats and Republicans and liberals and conservatives.”

“We have to do a better job of preventing outside influence from interfering with our elections,” he said.

Under President Trump, Langevin noted “a lack of urgency and directness.” Trump, he said, “can’t let himself believe that the Russians influenced the results of the election. He’s undermining the legitimacy of the presidency.”

He added, “I’m highly confident that the votes [of the 2016 election] were affected. Unless we push against [the Russians], punish them, defend against them, they will interfere in our elections.”

People have to be able to believe in election results, Langevin said.

Langevin strongly supports paper ballot backups. What if there was a power outage on Election Day, he said. ““How do you recreate the results of the election? How do you verify that the count is there?”

How do we go forward in the face of such challenges?

“We’re never going to get to a place where we’re 100 percent secure, there’s no such thing,” he said. “But what we can do is, we can bite down that risk.”

Aiza Shaikh, a rising junior at EGHS, is an intern for EG News.