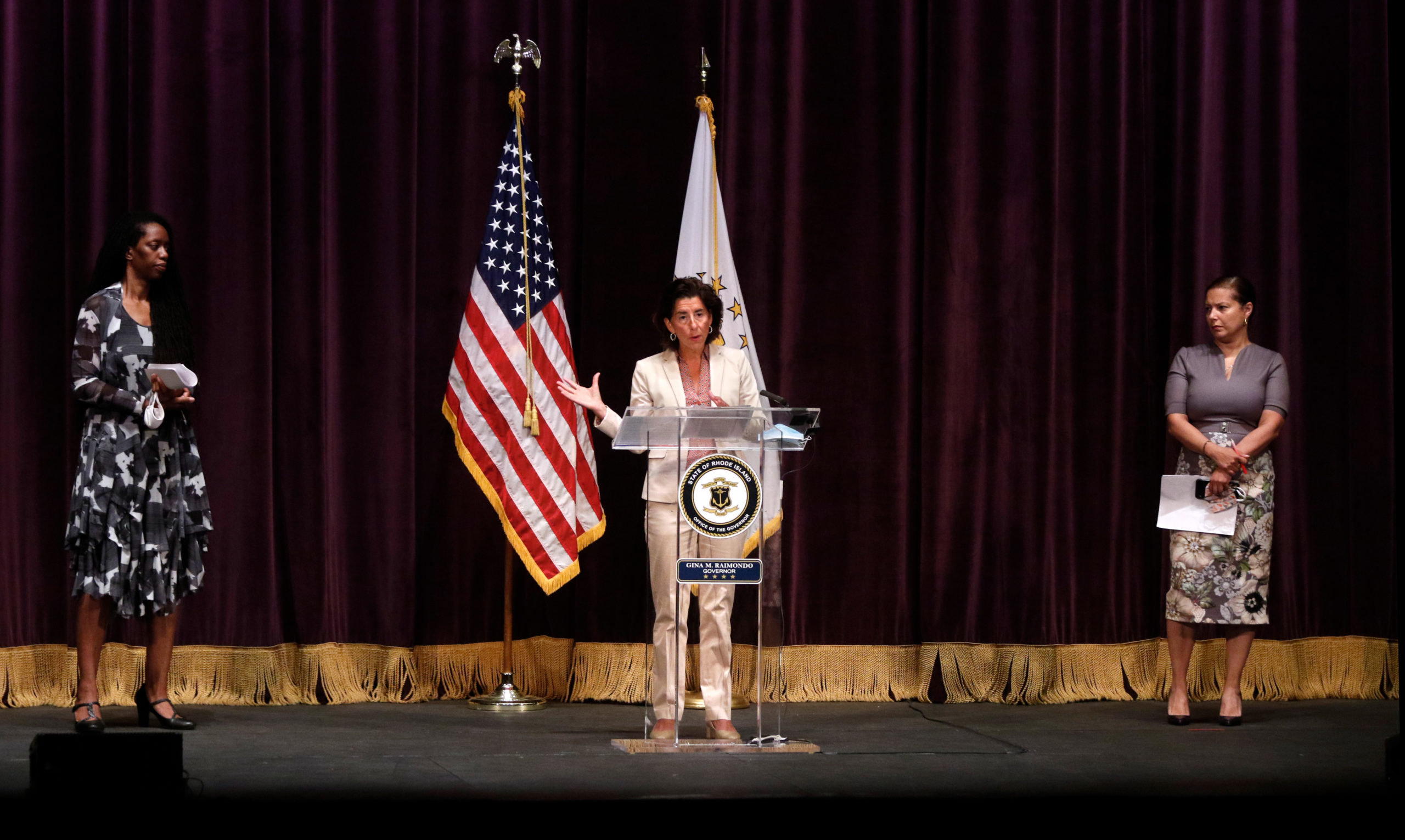 Data: The R.I. Department of Health said there were 53 new cases of COVID-19 Wednesday, bringing the total number of confirmed cases in Rhode Island to 22,078. There was 1 new death on Wednesday for a total of 1,051. East Greenwich has 134 confirmed cases and 3,794 EG residents have been tested, 29 percent of the town’s population (13,073). Find the most recent data at the DOH data hub HERE.

Gov. Gina Raimondo reviewed how contact tracing and case investigation will take place when a student or staff member at school tests positive for COVID-19. That’s because, she acknowledged, there will be cases of the virus when in-person school resumes later this month. The EG School Committee voted Tuesday to approve a plan that will have students back in class in a staggered fashion, starting Sept. 14.

She said there will be a dedicated K-12 contact tracing system for students and staff at both public and private schools, similar to the hotline for virus testing. There are 50 members on this team and if more members are necessary, they’ll be added, she said.

If a student or staff member in a school tests positive, they’ll get a call from a case investigator at the Department of Health, she said. This investigator will ask a series of questions about where the individual has been and who they’ve been in contact with in the past two weeks, including inside and outside of school. Raimondo said the team knows people won’t remember exactly who they’ve been near, so in addition to this phone call, the investigator will contact the school to help determine who is a close contact – every school has designated at least one staff member to help with case investigations.

A close contact is anyone who a person has been close to – within 6 feet – for more than 15 minutes at a time, Raimondo said. A close contact wouldn’t be someone that a person talked to for just a minute or who they’ve passed by quickly, for example.

Raimondo encouraged parents to get contact tracing notebooks for their children going to school, as well as staff members in schools. Writing down every place an individual has been and each person they’ve been in close contact with allows for easier contact tracing and, in turn, helps to stop possible outbreaks.

What might a student or staff member be asked? Questions include:

Raimondo said this is exactly why the school year has to be carefully structured and seating charts have become vital.

Close contacts of someone who tests positive for the virus must quarantine for 14 days and they’ll be doing distance learning at home for that time, she added. They’ll get tested and have to be monitored for symptoms. Even if someone tests negative or is asymptomatic, they still have to stay home for the full, 14-day quarantine.

She said they do not have to quarantine unless they meet the definition of being a close contact. If parents feel more comfortable getting their child tested, they can do that, according to Raimondo. However, she said, parents did not have to automatically quarantine their children because they were in the same area as a student who tests positive.

Dr. Nicole Alexander-Scott, the director of the Department of Health, emphasized the fact that the spread of the virus is much less common among children than it is among adults. She also talked about the importance of structured environments and an organized setting – this means an environment that has screenings for symptoms frequently, where regular cleaning is done, where clear rules are followed for mask-wearing and where people are social distancing.

“We’ve seen fewer than five cases associated with summer camps through this whole summer and all of those cases were isolated without secondary transmission continuing,” she said. “That means in none of these instances did we see spread between children.”

The key component is keeping ongoing spread under control, she said, which has been proven in childcare centers since they reopened in the state. Roughly 45 cases of the virus were found in 25 of these centers, out of 700 centers in total.

“When you think about those numbers, it’s clear we’re not seeing large groupings of cases at individual sites,” she said. “When a facility takes a thoughtful, comprehensive approach, the chances of us seeing new cases at that site are greatly minimized. We have the tools in place to be able to keep control of COVID-19 when isolated cases occur.”

At Wednesday’s press conference, Raimondo and Alexander-Scott got considerable pushback on the state’s planned “walkthroughs” of each school before reopening. For one thing, there’s been confusion about what exactly the state is doing: is it a walkthrough, as the governor insists, or an inspection, as was stated in a notice from DOH. The word “inspection” was changed to “walkthrough” in that document after the press conference.

Check this out: RIDOH changed the term “inspection” on their school checklist to “walkthrough.” This comes after some school leaders expressed disappointment at the inspections of schools by the state so far. First image was before the Gov’s briefing, second after. pic.twitter.com/ata4pWF3gR

Raimondo argued what the state was doing was above and beyond what any other state was offering to school districts but that it was not to supplant the district’s own need to manage its facilities.

“It’s the job of the schools, the LEAs, the cities and towns, to get ready to get these kids back to school,” Raimondo said. “What we are doing is providing support, providing testing, providing contact tracing, providing these walkthroughs, providing $50 million of extra money, providing them with everything we know how to do to help them.”

She said the idea of walkthroughs had been Larry Purtill’s, the president of the state National Education Association, one of the state’s two teacher unions. NEARI has been a critic of Raimondo’s reopening plan, saying schools are not safe.

In these scenarios, the case, or cases, are isolated and the close contacts are quarantined for 14 days.

Scenario 2: For cases in multiple classes or exposure linked to school.

In this scenario, the cases are isolated, close contacts are quarantined for 14 days, and DOH will recommend further action as appropriate, such as moving to a more limited reopening level.

In these scenarios, the cases are isolated, close contacts are quarantined for 14 days and DOH will recommend further action as appropriate, like considering the closure of school.

For more details and a look at the health protocol playbook, go you can head HERE.

Raimondo also addressed her comments Tuesday, about Warwick’s decision to go all distance learning even before the state decided what was safe, where she suggested parents there might take the district to court.

“We are hearing from a lot of angry parents, particularly parents whose kids have special needs, who have an independent learning plan with a contract that entitles them to in-person school,” she said. “So, parents are saying to us, ‘What can we do?’ And it’s up to them to figure out their legal rights, but I have sympathy for parents who say, ‘Well, the state has greenlighted the school to open, how come you’re not opening for my kid?’ But that’s not my decision.”

Raimondo will hold another press conference Thursday at 1 p.m., as well as a forum on Facebook Live at 3 p.m. You can find both livestreams on her Facebook page HERE.