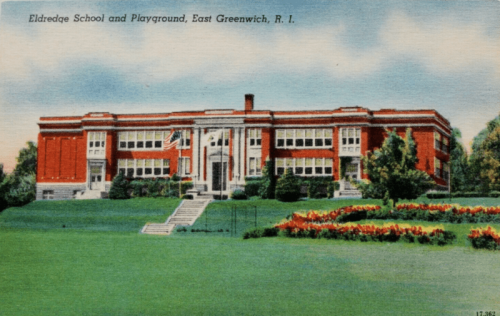 I first met Pudgy in elementary school. To have earned that nickname he must have been a fat little baby, because he was anything but pudgy at age seven. We were the two smallest boys in the class, which is probably what attracted us to one another. And it was no doubt our shared naughty sense of humor and artistic ability that caused us to remain friends. We were always drawing pictures, and the more outrageous and offensive, the funnier we thought they were.

When you’re a little kid your regular playmates are the children in your neighborhood. Pudgy lived on Rocky Hollow Road and I lived maybe three-quarters of a mile away on Castle Street, so as far as our getting together outside school, he might as well have been living on the Moon.

By fourth grade we were free to roam as we pleased, and Pudgy and I would sometimes meet in the Kent Theater on weekends. There was a double bill we both desperately wanted to see: “The Bride of Frankenstein” and “Son of Frankenstein.” The last showing was on a weekday, so we planned to attend the matinee after school (20¢ for kids, 35¢ for adults). The theater was practically empty, so we selected two seats near the front. Today these movies are laughable, but to two nine-year-olds they were scary as hell. We leaned against one another throughout the entire showing, and there were times we would have held on to one another if boys had been permitted to do such a thing. I can still picture Elsa Lanchester’s coming to life as Boris Karloff’s bride. It was truly frightening. We were still scared when we left the theatre, and because it was the middle of winter it was getting dark. I ran all the way home, keeping a sharp lookout for any threatening shadows.

I think it was that year that we first studied United States history. When we got to the Civil War and discussed slavery, Pudgy, who was what we then called a colored kid, started quietly crying with shame at being the descendant of slaves. The rest of us couldn’t possibly understand what it was like to be the only colored kid in the class. We didn’t even suspect certain things that Pudgy knew for sure. For example, it would never have occurred to us that a colored man had to go to Providence to get a haircut. Stuff like that.

The same thing played out again in the seventh grade during an American history class. The same quiet crying. Pudgy also had to endure another series of race-related embarrassments that year. I’m assuming his family had hair clippers, because he always looked as if he’d just had a haircut. Nonetheless, our English teacher loved to stand by his chair while she lectured us and feel his hair. The poor kid was in agony every time it happened.

Other than moments like that, Pudgy kept a pretty low profile, both in school and out. He was rarely seen on Main Street and never hung out at the bowling alley or sat on the courthouse wall. This continued after we were promoted to the eighth grade, which at the time was in the high school. Pudgy would join us most mornings in front of the Kentish Guard Armory for one last cigarette before crossing the street and to get inside before the bell rang. Otherwise we didn’t hear much out of him. I don’t ever remember seeing him in detention, where I was a regular.

We did take art classes together, of course. One day we were asked to make drawings of anything we wanted. Pudgy’s drawing showed a rat sniffing at an empty whiskey bottle. It was beautifully drawn, and I remember being impressed by his skill. When he showed it to Miss Byrnes she surprised and disappointed both of us by getting angry and yelling at him.

Every year the school had Career Day when representatives of various professions would tell us how wonderful it was to be a nurse or a state trooper or an insurance salesman and so on. Students signed up for sessions about professions that interested them. Attendance was never taken, and you could switch around with no one’s being the wiser – or really caring.

One Career Day Pudgy and I attended a session in Eastman Hall. When it was over everyone rushed off, and we found ourselves alone. Not wanting to waste the opportunity we sneaked off to Jigger’s Diner for a coffee and a cigarette. We returned in a half-hour or so and reentered the building. Of all the worst people in the world to meet up with, who was there but Dominic Iannazzi. Any other teacher would have scolded us and let it go at that. But Uncle Iron, who enjoyed being the on-site Gestapo, took us to Mr. Brackley’s office. Skipping school normally earned you two hours of detention for every hour skipped. But in this case I was suspended for a day, which I welcomed as an unexpected holiday. Pudgy was permanently expelled. The difference between us? I was a white kid, and he was a colored kid. That’s the way it was in East Greenwich back then.

After expulsion he spent his days mostly at home. One afternoon he was sharpening something on a wheel, and a piece flew into his eye. We’ll never know if the eye would have been saved if he’d been a white kid. Pudgy acted as if it didn’t matter. Yeah, right. This further guaranteed his staying at home. There was no work in East Greenwich for a one-eyed colored kid without a high school diploma.

We hardly ran into one another the following year, but one night we attended the EGFD carnival and muster at the high school. Among the usual assortment of carnival games was a ring toss where you could try to win bottles of cheap wine. It was easy to ring a bottle, but next to impossible for the ring to encircle the wooden block on which the bottle stood. Incredibly, one of us managed it, and we walked off with a bottle of muscatel. We were all of sixteen, but the game operator didn’t seem to care. There was a small patch of woods overlooking the field, and we sat there for the next half-hour or so passing the bottle back and forth. I can’t remember if we finished it. Sick? You wouldn’t believe how sick we were—in addition to being pathetically drunk. Thirty years later a friend offered me some yellow Muscat grapes, and just their smell brought back a feeling of nausea.

At some point Pudgy’s family moved to Providence. I don’t know why. Maybe they had to move out of their house. There were only seven or so other houses in East Greenwich where colored families could live, all of which were occupied. Pudgy once came back for a visit. He didn’t look well, but it was good seeing him.

A few months later I visited him in Providence. He was living with his parents in a pretty sparse apartment. Obviously there was no money for anything but necessities. We went out to find some of his neighborhood buddies and decided to have a drink. I suggested Keegan’s, where we’d all be welcome. They agreed it was the perfect choice, and we had a good night.

And that was the last time I saw Pudgy. I later learned that he’d died in 1984 at age 47. He’d made a life for himself, however short. Got married, had a son, and if he were alive today would be a proud great-grandfather. I still think about him occasionally and about how callously and cruelly his alternative future was stolen from him by the East Greenwich school system.