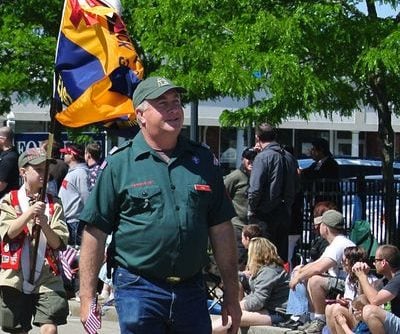 Somehow I never crossed paths with John Bradley. I knew his wife, former town Parks & Rec head Cathy Bradley, for years and in reading his obituary it seems he liked a lot of things I liked, in particular, nature and trees. Yet, I did not have the pleasure of knowing John. I think I know why – he kept a low profile, little interested in the plaudits many of us are happy to receive for our good works.

As EG resident Claudia Smith wrote in an email suggesting I might want to write something about John: “He was a friend to many, enemy to none.”

Bradley was a member of the EGHS Class of 1974 and became a licensed horticulturist. One of his enduring passions was scouting – he was integrally involved with Troop 2 East Greenwich for several decades, where he impacted not just boys but his fellow scout leaders.

Here are recollections from just of few of them:

Matt Wolcott, member of Troop 2/EG from 1990 to 1996
John was, by all accounts, young at heart and wise with experience. I knew John for most of my childhood, or as soon as I started in Scouts with Troop 2, East Greenwich. I would later go on to become an Eagle Scout which I credit a large part to John’s persistence and patience with me. It was down to the wire as I hurtled toward my 18th birthday (the cutoff to be eligible for Eagle), and I vividly remember evenings at John’s kitchen table, grinding through the last merit badge requirements and other advancement requirements on the long march toward earning my Eagle. He could have been doing any number of things that marked John’s many interests – balancing home life with Cathy and their baby girl or tending to the many animals he kept, like Herschel and Coco, his beloved spaniels, but there he was, holding me accountable and nudging me those final steps because he believed in me – something that I’ve heard echo in the stories of other former Troop 2 Eagle Scouts who were fortunate to know John.

From whitewater rafting trips in Maine to Civil War battlefield trips in Virginia to annual ski weekends in North Conway, some of my very best memories as a boy and young man involved John. He made Scouts fun and engaging at a time when the social, athletic and extracurricular pressures to give up on Scouting were constant. Of all the stories with John, one that I still tell to this day was on a backcountry camping trip in the Presidential Range of the White Mountains (N.H.). Forced below treeline to seek shelter and bivouac for the night from the remnants of Hurricane Andrew [in 1992] as it passed over the region, John found a tent platform that would be our camp for the night. Having decided prior to the trip we would “go light” and use tarps (if necessary) as shelter rather than tents, the situation on the platform became exigent as Andrew ripped overhead, bringing a deluge to the mountains. Making the best of a cold and miserable situation, the night quickly turned to laughter when, in the midst of heavy lightning and downpours, John sprang into action as the pooling water of the makeshift shelter gave way, pouring its contents onto several of us in our sleeping bags. John made the rounds throughout the night, periodically diverting the water away and doing his best to keep us boys dry (a noble effort despite impossible circumstances).

That’s who John was. Always putting others first, never giving up on someone when self-doubt or long odds tempted resignation. I can still hear his infectious laughter and maybe even stronger words when I deserved them most, because he cared.

These are just my stories. There are many more boys John worked with and mentored and all of them will have theirs to remember John by.  And I am certain that all of them are better for it.

I was not in Troop 2 as a scout; I came into after high school and then again after college. My own troop folded the year I made Eagle so I never got a ceremony until Troop 2 Scoutmaster Jim Essex invited me to join their Eagle Court in December 1977. That was an opening of the door to Troop 2 for me. When I got back to Troop 2 in the mid-1980s, John was full speed.

John was involved in any activity that involved animals and nature. That was John. I was more involved in safety, first aid, emergency preparedness. John had so much knowledge, I would joke with him about it. He even knew what type of wood to burn in a campfire.

John was a worker. Whether he was in your backyard or scouts, he’d show up with knowledge, energy and tools. But if he did show up, it was always a full day with John. He would not stop. 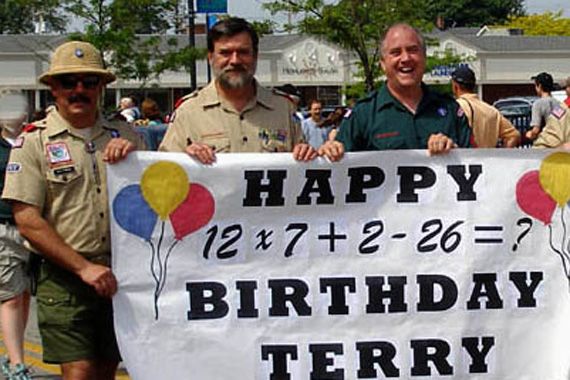 An EG parade with, from left, Jack Romano, Chris Smith and John Bradley, holding a sign for Jack’s sister.

He was dedicated to showing up.

Many of us take the highway in life; John knew the backroads. We’d be on a scout trip, maybe in Maine, and instead of maybe hitting the LL Bean store or the outlet shops in Kittery, John would know about some obscure museum somewhere and we’d go there. He had the knowledge and interest to do something different.

He loved his family, friends, animals, nature and some good food and drink. After a full day, John knew how to sleep. I almost believe John could sleep standing up.

He fit the scouting line: “Scouting rounds a person out.”  John was involved with many things. His experience, assistance and caring will be sadly missed. A friend to many, I am proud to say he was a “best friend.” Relax John,  we got this.

John Bradley led the Venture crew, which is targeted to older scouts. All the boys from last fall’s Eagle Court are in that crew. We do activities with the troop but also just with the crew. One of John’s favorite things to do was to take us on hikes. We would stop every 10 feet to identify a different plant – he would get teased about it but that wouldn’t stop him. John would push the boundaries a bit in a good way.

Claudia and Chris Smith, through Troop 2

“A friend to many, enemy to none,” wrote Claudia. They met 37 years ago, through Troop 2. “John was just the go-to guy you always went to from setting a tent to identifying any plant to just about anything,” said Chris. “He was a gentleman, a really classy guy,” said Claudia. “He made scouting fun.”

“A lot of the Troop 2 leaders never made Eagle,” said Chris, “so John was the one who mentored us. He was one of those real renaissance men. There were a lot of facets to John.

He had a landscaping business. He was an arborist. He had a wealth of knowledge, even with machines. He did all his own repairs on things like backhoes, mowing tractors.

“Whenever you needed something, John came through with a smile. He would arrange it and he would do it,” said Claudia.

“He didn’t want any glory put upon himself. He wanted the accolades given to the boys. He never wanted the accolades, he just wanted the job done,” said Chris. And it wasn’t just about the scouting – he would stop by a baseball or soccer game just to see how the boys were doing.

“He was the most selfless person I have ever met,” said Chris. “You had a conversation with him, you never felt bad,” added Claudia.

The kids that knew him, multitudes of men, might say, ‘He was my best friend.’ A lot of people felt that way.

John as the adult leader of Venture Crew 2 taught me a lot about life. Until really connecting with John, life had always seemed to revolve around money but John showed me otherwise. John showed me that the value in life isn’t making money but finding your people and doing what you love. Like I already stated, John loved nature and found his people through scouts. He could tell you every plant in the forest. He could tell you every disease every plant in the forest could have. He really was a fountain of knowledge when it came to what he loved. He was always showing us things from how to chop wood to conservation.

He became pretty infamous in our troop for his hikes. We would often joke about his “1-mile” hikes that always ended up being much longer. He wouldn’t say that to try and trick us, it was just that he would rarely defer to a map. Instead, with him, we were free spirits in the woods. In memory of John, the troop is trying to name a trail in Arcadia after him. We joke that we’ll call it the 1 mile John Bradley Trail when it’s really 5 miles.

Quite honestly, my biggest regret was not going on more of those 1-mile hikes with him. Over the past two years, with us being busy high school students and him becoming sick, the number of trips and activities we were able to experience with him dwindled. Our last two activities with him were rock climbing and watching a ski movie at the Avon. John couldn’t participate in the rock climbing but he wanted to be there for us anyways. And that last day with him at the Avon I’ll never forget him offering to pay for our tickets. That was just the kind of person he was.

Here’s a video of John (and Stephen) jumping into a lake.