Above: The Kentish Guards atop a Middle Road hill on a Memorial Day more than a half-century ago.

An afternoon more than a half-century ago left its mark

My brothers and I were thunderstruck. Soldiers were climbing up a hill from Middle Road, next to Tanglewood Drive. They were marching just outside our house, where we had moved in only a week or two before. Amid the frenzy of unpacking and putting-awaying, the soldiers were a welcome diversion.

Plus, they had guns.

We had no idea why. But it might be important. So I grabbed my Kodak Brownie Starmite camera. We boys, 12, 10, 9 and 6, scampered up behind them, preteen camp followers. Some of the troops were going into the forest behind the neighbor’s house. But after a few minutes, they came out. What was going on?

We had no idea.

Later we learned they had gone not far into the woods to decorate the burial sites of East Greenwich heroes. We had just moved in to a house across the street from an old graveyard. It was chilling, and thrilling, at the same time; equal parts Halloween and the Fourth of July. The soldiers stood silently at attention. Suddenly they lifted their guns. Then they locked and loaded. 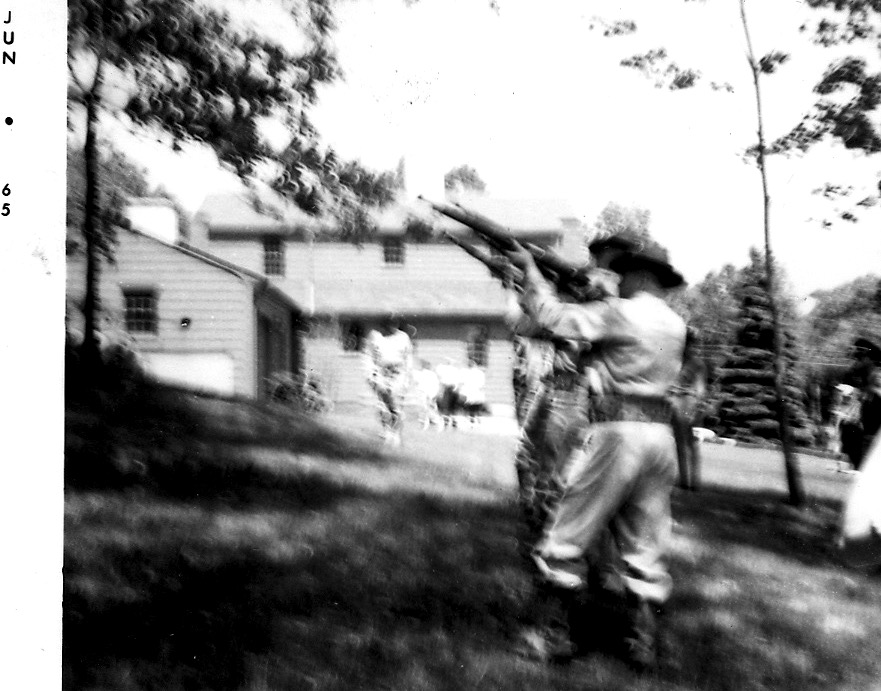 Six men fired three rounds each in a deafening cascade (only this week did I learn why there weren’t seven, for the traditional 21-gun salute: The front lawn of the Kent County Court House, as today’s town hall was known at the time, only has room for six shooters, so that was the number they used for ceremonies). It was the most memorable salvo of all those I’ve heard during more than 40 years of reporting on the U.S. military, at home and abroad.

Our ears rattled and noses filled with the acrid scent of cordite. Smoke filled the air. We scrambled for the brass casings as souvenirs.

We’d later learn that this was an annual East Greenwich rite, with members of the Kentish Guards and American Legion Post 15 honoring the town’s veterans. It had been happening since 1868 . . .  97 years! They’d travel in caravans to some two dozen smaller historical cemeteries across town to honor scores of veterans, according to various accounts in the Rhode Island Pendulum over the years. They’d break into two groups; a smaller band would trek deep into the woods for cemeteries well off the beaten path, while a larger contingent would visit those closer to the roads.

East Greenwich historian Alan Clarke says this particular Middle Road cemetery is the final resting place for more than a dozen members of the Spencer clan. “I always say that you can’t step into an East Greenwich cemetery without stepping by a Spencer,” he told me awhile back.

Faded flags would be pulled from the spring-warming ground and replaced with new and bright red, white and blue banners, to flutter, far from view, for the coming year. Corroded metal markers would be replaced, if needed: an eight-pointed emblem for those who served in the Revolutionary War; a star for Civil War veterans; round ones, for World War I; and “Ruptured Ducks” for World War II. They too would stand as silent sentinels through the coming hot summer and the bitter winter to follow.

Larger East Greenwich cemeteries would be decorated on another day, with the respectful hoopla they deserved. Yet watching these townsfolk tramp to the smaller, hidden final resting places to honor yesterday’s patriots was moving in a way that the bigger ceremonies, in bigger cemeteries, could never be.

The Kentish Guards won’t be making these formal hometown treks this year, because of the coronavirus. “This year it will be individual members doing what they can, given the circumstances,” Kentish Guards Colonel Warren Kaye says. Those still living in town – I left in 1978 – should try to do the same. Even the traditional East Greenwich Memorial Day parade has been cancelled (thank God Navy vet and longtime E.G. parade pooh-bah Carl Hoyer isn’t around to miss it).

Back on that hillside more than a half-century ago, Taps followed the volleys. It was that contrast, between the guns’ brash blasts and then the mournful sorrow of Taps, that seared that afternoon into my brain.

All told, back in 1965, East Greenwich would decorate the graves of 30 Revolutionary War veterans, one from the War of 1812, 209 Civil War veterans, five Spanish-American War vets, 67 World War I doughboys and 23 from World War II.

He died on Memorial Day. Exactly three years after I witnessed my first salute to the wars’ dead.

Charles “Larry” Callahan, a Warwick Vets grad, lived in East Greenwich for five years before joining the Army as a helicopter pilot. He died July 25, 1968, two months after Mark, when his UH-1 was shot down in Vietnam. He was 25.

His daughter would be born four months later.

The two young men, who I never met, have remained in my heart for years. I recall tracking down their names on the Vietnam Veterans Memorial in Washington, D.C., the day it opened in 1982. Unfortunately, they were the first in a long string of heroes I came to know during my reporting career who made the ultimate sacrifice for the rest of us.

Neither rests in a tiny East Greenwich historic cemetery. Larry is buried in North Kingstown’s Quidnessett Memorial Cemetery, along with his wife and parents. I fondly remember covering his mother, Millie, as a young reporter at the Pendulum in the mid-1970s. Mark rests alongside his parents in East Greenwich’s Glenwood Cemetery. I warmly recall his mother, Ruth, as the nurse in the East Greenwich school system, where she tended to sick kids, and those pretending to be sick, for 31 years.

Given the forward march of time, it’s somehow fitting that Route 4 wasn’t even built when they died. But Mark would know the location well. After all, it was about 700 yards east from that Shell station where he worked as a teenager. And about 700 yards west from where I witnessed that solemn ceremony 55 years ago.

Mark Thompson grew up in East Greenwich and worked at the Pendulum, after college, from 1975 to 1978. He now lives in suburban Maryland outside Washington, D.C.

Have a tip or story idea? Contact [email protected]. Know someone who would like to receive a copy of this newsletter? Tell them they can sign up HERE.