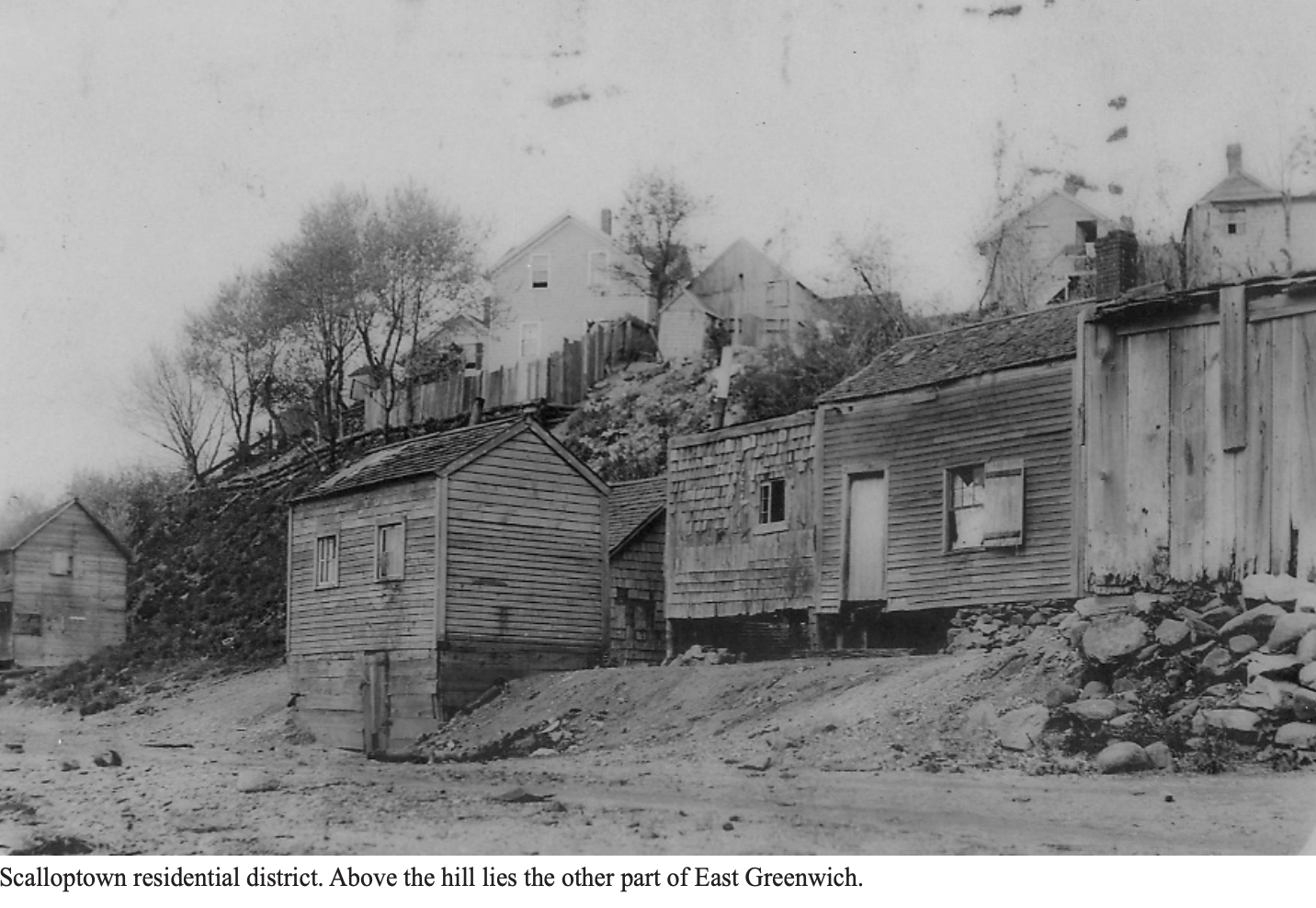 This is the second part of a two-part story. If you haven’t read the first part, you can find it HERE.

Editor’s Note: Recent events both national and local have prompted interest in the history of East Greenwich’s Black community. Nationally, the killing of George Floyd in Minnesota in May touched off protests and a continuing conversation about the legacy of slavery and systemic racism in the United States. Locally, the East Greenwich Historic Preservation Society decided to remove replicas of two prisoners – one White, one Black – that adorned the front of its headquarters, the town’s Old Jail at the base of King Street. The action came both as a result of the national protests but also after consultation with Black historian Charles Roberts of Newport. After they were taken down, East Greenwich News posted an op/ed by local historian (and EG News board member) Alan Clarke that gave some context to the figurines and argued against their hasty removal, but he also provided some history of Blacks in East Greenwich (find that post HERE). It got us here at EG News hungry for more information. Writer Catherine Streich took on the assignment.

To many, the loss of Scalloptown was seen more as a relief than a tragedy. A Pendulum article from 1968 notes that the area was “finally put to the torch in 1926” (emphasis added), indicating that E.G. residents saw the end of Scalloptown was something long hoped for. White members of the East Greenwich community had a negative perception of Scalloptowners, but their prejudices may have been the very reason for the neighborhood’s demise.

Many, including social reformer Sarah Fernandis herself, made the false assumption that Scalloptown was always a poor, lawless place, reinforcing stereotypes of the lazy, dangerous Black person. Census employment records, however, paint a different picture. In 1850 and 1880, all Black men (bar one in 1880) in East Greenwich were employed, while most Black women were not, implying that men were earning enough to support their families on a single salary. By 1905, the census indicates that the total population of East Greenwich had increased, while the number of people employed had decreased significantly, which gives a clue as to why at this time, Black unemployment skyrocketed. Scalloptown’s professed poverty, then, was more likely the result of economic change in the town and racial discrimination in hiring than inevitable, inherent inferiority of E.G.’s Black community.

Regarding Scalloptown’s dangerousness, the area actually had a low rate of violent crime, Fernandis herself admitting that “crimes of violence are rare” in the Providence Sunday Journal. One of the few (and certainly the most shocking) Scalloptown crimes to make it into the papers was committed by White residents (see a reprint of the 1898 article “A Trio of Human Hyenas Perpetrate Dastardly Deeds on the Shore of Greenwich Bay” in the June 20, 1968 Pendulum).

It is false perceptions such as these, of the inherent laziness of the Black community and the dangerous nature of Scalloptown, that partly contributed to the failure of Neighborhood Cottage. In the previously cited piece for the R.I. Historical Society, “Settlement House,” historian Jeffrey Hess posits that an “important reason for the Cottage’s lack of success … is the prevalence of a basic attitude toward the Negro which Settlement workers, white and black, usually held.”

Hess further explains the way that East Greenwich reformers set themselves up for failure by acting on prejudices and stereotypes of African Americans: “Instead of working through social patterns which existed in and served the needs of Scalloptown, Neighborhood Cottage virtually declared war on the community. It condemned its family life as immoral, attempted to place its children in institutions, and introduced classes in sewing, cooking, basket weaving, and chair caning as desirable vocational pursuits [These occupations would have been seen as trivial at the time and unlikely to lead to good jobs]. However, the crowning absurdity came when the children … whose grandfathers had lived as freedmen in the North, were taught by the town singing teacher the ‘old plantation melodies.’ It is perhaps not to be wondered that Scalloptown resisted such reformation.”

Essentially, although women from St. Luke’s and social workers like Fernandis genuinely wanted to help Scalloptowners, the prejudices that guided their efforts kept them from succeeding.

Although Neighborhood Cottage failed in the end, the fact that it existed at all is noteworthy. The 1908 profile in the Providence Sunday Journal points out that Fernandis “believes that the establishment of one of the few colored social settlements of the country in a New England state is an event of more than local significance.” Out of almost 500 of these social welfare establishments across the nation, only 22 served African Americans, and one of those was in East Greenwich. Settlement workers found that even in racially diverse communities, establishing integrated settlement houses was impossible because, as one Boston reformer put it, “White people would keep away from any place except a church where it was known that colored people resorted.”

As multiracial settlements were thus impossible, those running the houses had to decide which community to serve, and as the numbers show, they very often chose to help poor White immigrants over African Americans. The fact that one of the very few settlement houses for Black communities was located not only in New England, but also outside of an industrial city, was quite significant, and made Neighborhood Cottage unique in the context of the national social reform movement.

While the effort was valiant, opening an integrated church, educating poor children, running a free health clinic, starting one of very few Black settlement houses in the nation and hiring a highly qualified Black woman to run it, the underlying conception that the town’s shoreside residents were naturally lazy, dangerous, and inept undermined the effectiveness of the Cottage’s work and led to the frustrations that ended in evictions. By failing to provide favorable economic conditions or effective reform, East Greenwich irrevocably doomed its African American community. The town found it easier to evict Scalloptowners and burn down their homes than face the inefficacy of its reform work.

Intentional or not, the actions of reformers and the Town Council, fueled by the negative opinions and stereotyping of E.G. residents, changed the racial makeup of East Greenwich for the next 100 plus years.