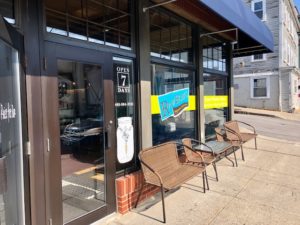 Six years ago, Patti Burton opened up what she described as “a hole in the wall”: a tiny shop on Main Street that served juices and smoothies. Burton opened the shop with her daughter, Jillian Burton, and they named the shop Raw Bob’s, after a family member who had fallen ill. Bob’s illness had made the Burtons rethink food and the importance of a healthy diet. Raw Bob’s was their way to bring their passion for healthy living to a larger audience.

Burton said East Greenwich made sense because there were no juice bars here back then. They planned right –customers found it and started coming in.

Initially, Burton viewed her shop as a kind of “grab ‘n go” place where customers could come in, get their drink and head out. There was not much seating in the shop. But customers started to stick around, making conversation and comparing orders. It dawned on Burton that there was potential for a culture here: one that felt positive and encouraging.

So, in 2016, the Burtons moved the business down the block to a larger space. While some small businesses on Main Street never gain a foothold, Raw Bob’s had figured out what people wanted – and they seemed willing to hunt down a parking space to get it. 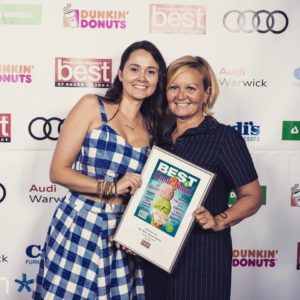 The Burton’s also decided to introduce food to a menu that had previously only offered juices and smoothies. The present location at 333 Main Street features more seating, larger gathering spaces and an expanded menu. On any given day, a customer walking into Raw Bob’s will be met with smiling faces and several people calling out, “Hi” or “How are you?”

Some customers make Raw Bob’s their hangout spot, much like the regulars at a coffee shop or a bar. Burton said they wanted to create a space where customers could come in and really relax.

“We’re not just mixing smoothies, but establishing a culture behind the counter. The employees share this culture with the public,” Burton said.

The names of the various products are designed to loosen people up. It’s kind of hard not to when you order a “License to Dill” juice or a “Beets Me” smoothie.

“When I come up with the names of our smoothies, juices and food, my goal is always to put a smile on the faces of customers,” Burton said.

Raw Bob’s has held it’s healthy ground with a menu that’s plant based and all organic, which means their offerings aren’t exactly cheap. In an era where a coffee can cost $5 and a glass of wine $12, the juices at Raw Bob’s come in right in the middle. The Burtons think it’s worth it.

“Be proud of what you put into the world,” Burton.

And they’ve planning to expand again soon, with a plant-based cafe and catering service, also on Main Street.

Maya Barnes, a junior at EGHS, is an intern for East Greenwich News and works part-time at Raw Bob’s.