Raimondo Approves In-Person Learning for EG, Most of State 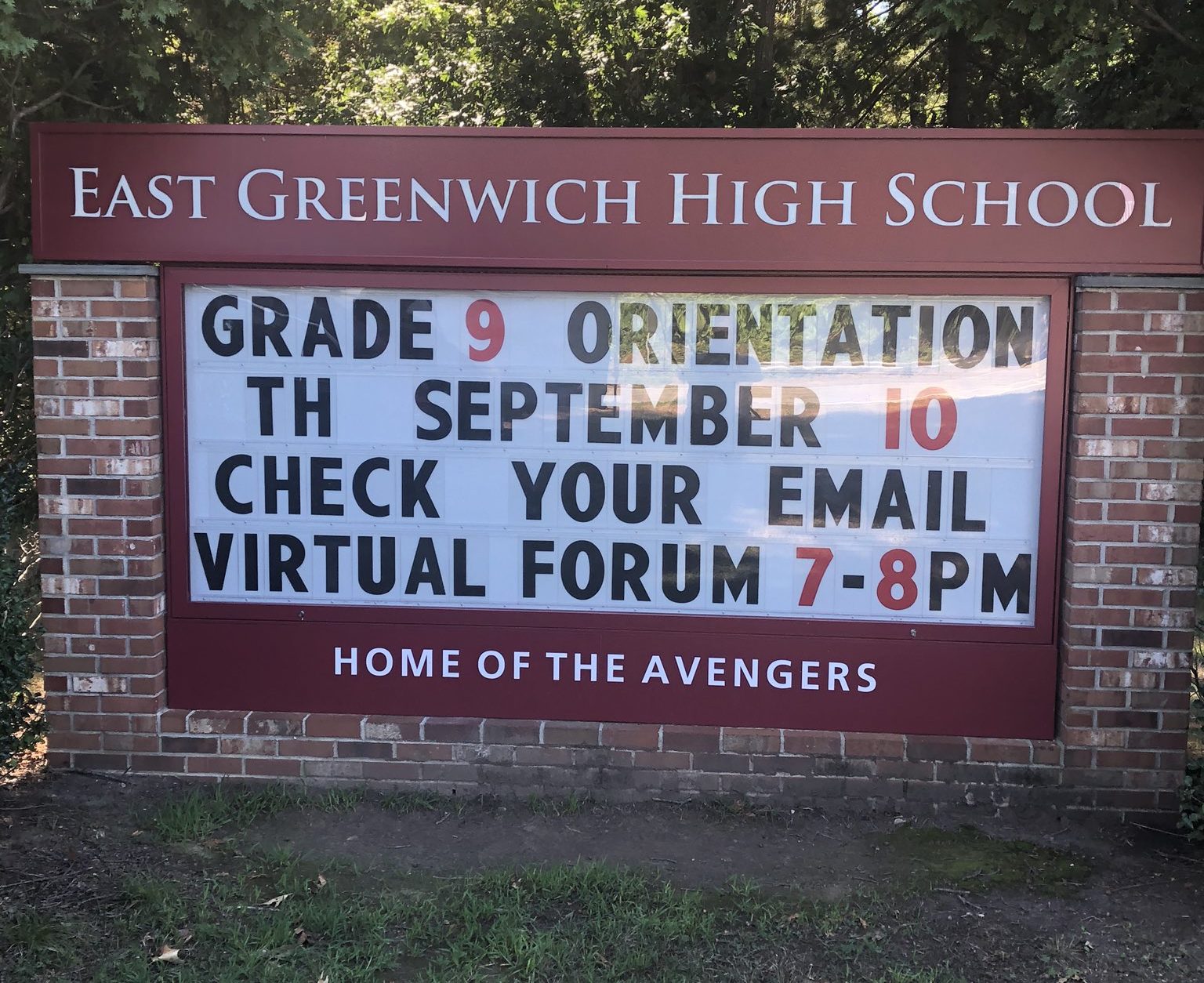 Data: The R.I. Department of Health said there were 46 new cases of COVID-19 Monday, bringing the total number of confirmed cases in Rhode Island to 21,949. There were 2 new deaths on Monday for a total of 1,048. The number of confirmed cases in East Greenwich is 126 and 3,558 EG residents have been tested, 27 percent of the town’s population (13,073). The town’s test-positive rate is 4 percent. Find the most recent data at the DOH data hub HERE.

Gov. Gina Raimondo announced Monday all school districts, except Providence and Central Falls, can return to full in-person learning Sept. 14, based on the five metrics developed to measure whether or not it would be safe for students to return to in-person learning.

“It is my expectation and RIDE’s expectation that that is exactly what you will do,” she said during a nearly two-hour COVID-19 press conference at Veterans Memorial Auditorium.

Meyer has previously recommended a five-day-a-week in-person model for elementary students (K-5) and a hybrid model for middle and high school students (6-12), with half of Cole and EGHS students attending school two days a week and the other half attending another two days. Students would have distance learning the days they are not in school. Under that plan, there would be no school for Cole and EGHS students on Mondays.

Raimondo said she hoped the districts that announced last week they were moving to full distance learning without waiting for her announcement Monday would reverse that decision based on the metrics from the Dept. of Education and the Dept. of Health. Among those districts were Warwick and Coventry.

“If they don’t, certainly they’ll be exposing themselves to any number of lawsuits on behalf of parents who may demand in-person learning,” Raimondo said. “It’s not clear whether they might lose any of their federal funding, now that we’ve officially said it’s safe to go back to school. Certainly, a parent who feels they aren’t getting a good education can go to the Education Board and press the case they’re not getting a high-quality basic education. I know parents are going to look into their legal remedies, and we will too.”

That said, based on the fact this scenario has never happened before, Raimondo admitted she was unsure whether or not the state has the authority to force districts to return to in-person learning but said her office was researching the matter. She also said she was unsure that she would use that authority, even if she had it.

Providence and Central Falls will be allowed to open with partial in-person learning, Raimondo said. Students with learning differences will also be prioritized for in-person learning. Raimondo told Providence and CF families they didn’t need to be scared, but that the state was acting out of an abundance of caution. (Soon after Raimondo’s announcement, the Providence superintendent announced elementary schools would be opening Sept. 14.)

Raimondo said that private, independent and religious schools are free to open for full in-person learning, since their plans have been reviewed and the state has hit all four metrics. These schools are exempt from the municipal metric since they have students from all over the state. She said those schools will have the same access to testing, contact tracing and case investigation as the public schools.

Here are the school opening metrics as outlined by Raimondo Monday:

Are the schools actually ready? Raimondo said she understands it’s one thing to have an excellent plan on paper and another thing to actually operate those plans in the school. She highlighted the fact that every school building will be inspected by a facilities readiness team before any students enter the building. There will also be a continuous audit process throughout the year to make sure every facility remains safe. If they’re not, the Education Operation Center will get sent to the school and help them. She emphasized that if any facility doesn’t meet the requirements, it will not be allowed to open. The children can then either learn in another building or switch to distance learning until the facility is brought up to code.

“No one is ever gonna force you to send your kids to school,” she said. “Do what’s right for your family, but it is our obligation to provide every student in the state of Rhode Island with a high quality, public education.”

Dr. Nicole Alexander-Scott, the director of the Department of Health, said the state has hired Arden Engineering to provide air circulation expertise, alongside Jeremy McDonald, an expert in air quality, and Dr. Erin Bromage, who focuses on viruses that travel between humans and animals.

As Labor Day approaches this weekend, Raimondo warned residents to not crowd in social gatherings, pointing out the spike in cases 3 to 4 weeks after the Fourth of July this year. She reminded everyone to follow the social gathering limit of 15, as fines are still in place.

“Follow the rules this weekend,” she said. “Be responsible, stay outside, wear your masks and keep six feet away from folks. No big parties.”

In conjunction with the new Take It Outside Campaign to encourage everyone to move more activities outdoors, on Monday Raimondo said people and businesses could reserve space for free at some state properties. Space is being made at places including Fort Adams State Park, Fort Wetherill State Park, Lincoln Woods State Park and some areas in Providence. She said that many of these places should have free WiFi. Find out more on the new website HERE.

She also thanked the municipalities from all over the state that are stepping up outdoor activities, including East Greenwich, where Main Street will be closed Sundays in September and October from 2 to 8 p.m. for expanded dining and retail space (read more HERE).

Raimondo announced that state beaches and parks will remain open after Labor Day with free parking but no lifeguards on duty. Restrooms at these places will also be open for an additional two weeks. Social distancing rules still need to be followed. Updates will be posted HERE.

Last week, there were more than 1,200 inspections at local restaurants and businesses. Raimondo said that 14 percent of bars weren’t properly separated from bartenders – better but still not good enough, she said. There was also a slight increase for the percentage of bars that had crowding, and she said people should leave if they find a crowded bar area.

Noting that 17 percent of businesses were still not screening everyone who enters for symptoms, Raimondo encouraged them to improve, by providing something as simple as a checklist of symptoms.

Raimondo pointed out that the percent positive rate continues to be among the lowest so far, at about 1.2 percent. Last week, 9,500 people were tested. She emphasized that as more people are tested, the more cases will be found but that was no cause to be alarmed. Therefore, there should be more of a focus on the percent positive rate when considering the effect the virus is having on the state.

“We’re not out of the woods,” Raimondo said. “Coronavirus is with us. Sadly, we still lose people every day. But I come before you today with a sense of confidence that the steps we’ve taken and the systems we’ve put in place to protect the people of Rhode Island, by and large, are working.”

Press conferences will be held every day for the rest of this week at 1 p.m. for about 15 minutes, primarily focusing on schools in relation to COVID-19. Tuesday afternoon, the conference will take a closer look at testing.