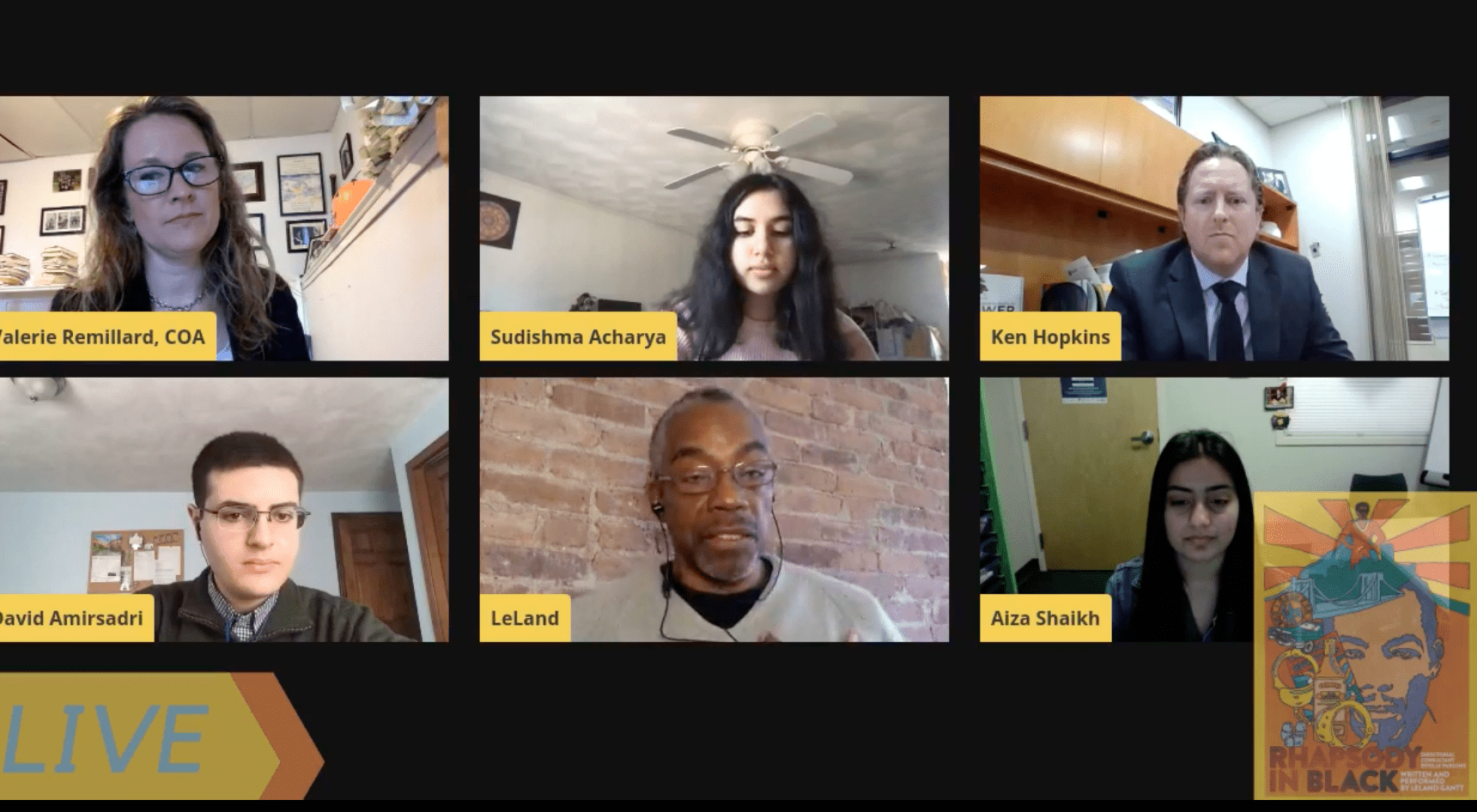 It happened during a livestream Q&A with actor LeLand Gantt, discussing his performance of his one-man show about race

Students at the high school and students at home were all tuned into a virtual Q&A with actor LeLand Gantt Friday about his one-man play, ‘Rhapsody in Black,’ which illustrates his growing up Black, when the chat room on Youtube began to fill with racist and some sexist comments.

Principal Ken Hopkins was part of the Q&A, along with three students, and Valerie Remillard, executive director of COA, the arts organization that brought Gantt’s program to the school. Only Remillard could see the chat and she started to boot users off – many of them using obviously made up names (including Snortex, David Lynch Fan Club and Berry McKockiner as well as more offensive monikers). Hopkins began getting texts alerting him to the offensive messages but it was not possible to disable the chat while the event was going on.

Remillard ended up playing whack a mole. “I was systematically kicking people out of the chat … I wish I had been able to pay more attention [to the Q&A] and be a better host. My role shifted to damage control,” she said Sunday.

Some students on the chat also played defense, decrying the offensive comments, which included profanities and at least a couple uses of the n-word, as well as comments referring to female students.

Then, in the midst of the presentation, the high school was hit by a DDOS cyber attack, cutting wifi to users at the school, including Principal Hopkins and one of the student participants.

According to Hopkins, DDOS –  distributed denial of service – attacks flood a network so users can’t utilize wifi. This is not the first time such an attack has taken place at the high school, he said. Both incidents are being investigated by school officials; the cyber attack is being investigated by the EG police as well.

“At this time, we cannot confirm, nor do we have information, that this was a student or students at EGHS, as the link was shared, and could be shared, to a larger community,” Hopkins wrote in an email that went out to the school community Friday afternoon. “We request that anyone with information as to the identity of the individuals involved, please contact [the] administration immediately.”

In an interview Sunday, Hopkins said, “The overwhelming sentiment from our community was they were horrified.”

While it’s discouraging that “a few bad actors would try to disrupt the event, all it did was just justify the necessity of further conversations,” he said. “I’m proud of our students. What occurred and the malicious intent behind it, doesn’t diminish the work that was done all week and during the actual conversation with Mr. Ghant.”

Remillard said she was sorry that something sponsored by COA could have, because of the racist comments, unduly upset some of those watching.

But she doesn’t regret bringing Gantt and his performance to the school.

“From what I’ve gathered in conversations with people I know and trust who are much more actively doing this work, what happened is par for the course,” Remillard said. “Our chat was sabotaged. I learned that this is what happens when you talk about race.”

Aiza Shaikh, one of the students in the Q&A (and a reporter for EG News), said she’d really enjoyed the play and being able to ask Gantt questions.

About the racist and sexist comments, Shaikh said, “To some degree I am surprised but it wasn’t entirely unexpected. There are students at the school who do say racist things…. I think kids really took advantage of being able to make anonymous comments.”

She said there will be more programming about race – that COA had already decided that before Friday.

“Art should be a little bit uncomfortable,” she said. “At its best, it will make you examine what you think you know about things, especially in high school.”

You can watch the Friday presentation – without the chat – HERE.