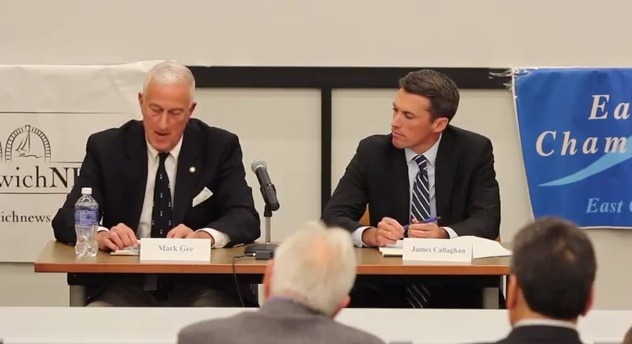 The debate was presented by East Greenwich News and sponsored by the East Greenwich Chamber of Commerce and EG Rotary Club. ABC-6 newsman Mark Curtis moderated the debate.

The two candidates differed on paying back the 38 Studios bond, with Callaghan saying he wants to learn more but is leaning toward repayment, arguing it could be cheaper in the long run. Gee, meanwhile, said he did not favor repayment and was not intimidated by negative predictions from rating agencies.

On consolidation, Gee suggested focusing on one area, for instance trying to get all the teachers in all the school districts around the state included in one negotiation. Callaghan suggested “incentivizing” towns to consolidate services.

“In some respects, the way this district goes, the state goes,” Callaghan said, noting its size and that it comprises parts of four towns: East Greenwich, North Kingstown, South Kingstown and Narragansett.

On economic development, Callaghan said the state needs to focus on the tech industry, marine sciences and green technology.

“As a business person,” said Gee, “I am very nervous about empowering people … to give away state money to entice companies to come to Rhode Island,” he said. “Let’s forget about attracting new businesses. Let’s take care of the businesses we have already.”

You can watch the entire debate above or at the EG News youtube channel here: https://www.youtube.com/watch?v=U-WlIbbL9jg&feature=youtu.be

You can also watch the debate on public access: Verizon Channel 37 (across the state) and Cox Channel 17 (in North Kingstown, West Warwick, East Greenwich, West Greenwich, Coventry and Exeter):