The School Committee got an update Tuesday night on field trips and fundraising under the district’s new policy eliminating parent fees but at least some teachers and parents remain confused over how and if field trips will happen going forward. 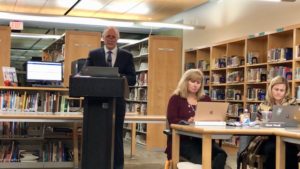 Finance and operations head Greg Booth said the district has drawn up a fundraising form and the district has developed a procedure for when a teacher or group wants to fundraise for a trip. So far, two groups have implemented fundraising plans, the Cole Drama Club and the Future Business Leaders of America club at EGHS.

But it seems at least some teachers may be opting against putting in for a field trip because the process could be more onerous. A comment from EGHS senior Caroline Hollingsworth* suggested that might be the case.

She told the School Committee her physics teacher, John George, had already told his students the annual trip to Six Flags to test physics equations would not take place this year.

“He said because of funds there would be no trip,” Hollingsworth said. In previous years, the student fee for the trip was around $30.

According to Booth, the physics trip to Six Flags is on his list because it has been an annual event. That said, it remains unclear how the district plans to support such annual events. School Committeewoman Anne Musella suggested the School Committee consider setting aside some funds for field trips, even at this mid-point of the budget cycle. Chairwoman Carolyn Mark said it would be better to wait until the district’s budget picture was better in focus, when the first quarter numbers were in, sometime in November, or perhaps December or January if the committee decides to wait for fiscal year 2019 audit results.

Parent Denise Lopez asked what would happen if donations were collected for a trip that didn’t end up taking place because of a lack of funds.

Committeeman Jeff Dronzek said any checks submitted for a specific trip could be held until it was determined the trip had funding and if the trip had to be cancelled the checks would be returned.

So far this school year, one field trip has taken place, Booth said. Last year at this time, five field trips had taken place. Requests for field trips are being submitted to both Booth (who handles the money end) and Alexis Meyer, curriculum director. Meyer said she currently had six field trips “in the queue.”
Mark acknowledged there were unknowns.

“We can’t guarantee that every teacher … is going to want to put a trip forward.”