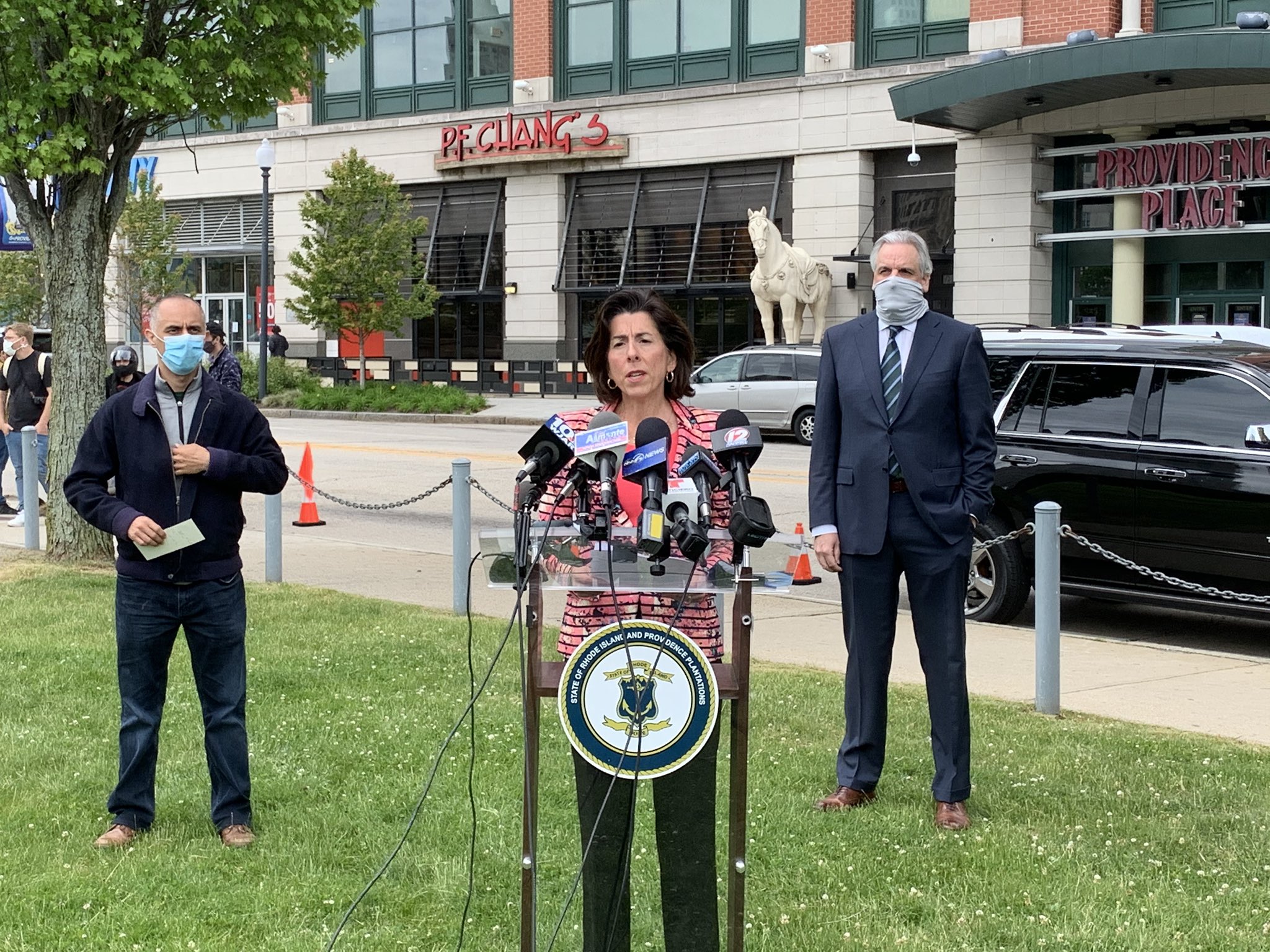 There were 101 new cases of COVID-19 in Rhode Island Tuesday, for a total of 15,112, and there were 12 deaths, bringing the death toll to 732 people. The number of people in the hospital with the virus continues to hold steady. The number of confirmed cases in East Greenwich – 70 – has not been updated since Friday. Find all the latest data on the DOH data dashboard HERE.

Overnight looting in downtown Providence prompted the mayors of Providence, Warwick, West Warwick, Cranston, and Central Falls, among others, to initiate 8 p.m. to 5 a.m. curfews in their cities Tuesday night. Providence police arrested 65 people, most of them men and nearly all of them from Rhode Island. One of those arrested was a 20-year-old East Greenwich man.

“So yesterday I held a press event to commend the peaceful protests, I was proud to be a Rhode Islander yesterday morning because I saw the peaceful protesters exercising their rights, and that activism made me proud,” said Gov. Gina Raimondo in a new conference about the violence Tuesday morning. “Today, I stand before you disheartened, dismayed, at the events we saw right here in the City of Providence last night.”

She added, “What we saw last night was not a protest; what we saw was an organized attack on our community, at a time where we were already vulnerable.”

Raimondo said people first converged on the Providence Place Mall but the mayhem went from there to the State House and other government buildings, and to small businesses, particularly on Westminster Street, and individual cars.

“Small businesses who are still getting back on their feet,” she said. One of the stores that was looted was CIVIL Providence, a sister store to the CIVIL store on Main Street in East Greenwich. The store sells skateboards, snowboards, apparel and sneakers.

Raimondo and State Police Col. James Manni both said they had been warned of possible attacks Monday night.

“No, we were not caught off guard at all,” said Manni. “We had intelligence reports that something to that effect would occur. We had nearly 60 troopers, nearly 60 police officers, to coordinate with. We were very well prepared.”

That‘s how they were able to make so many arrests, Raimondo said.

“What happened last night in Providence was not a protest,” Raimondo said at the regular COVID-19 press briefing Tuesday afternoon. “Make no mistake about that. It was an attack on the people of Rhode Island.”

She added, “If you are a person of color in America and you see persistent inequality, you get angry, as you should. One way you can express that anger is by taking action to bring about change. Clearly there’s more work to be done, we have individual and systemic racism among us, so keep fighting the fight until we win, but not with violence.”

Raimondo said they wouldn’t know for a couple weeks if there would be a spike in coronavirus cases because of the protests and large crowds.

“In two to three weeks, we’ll see. It’s going to be a challenge because we’re seeing different things – reopening and dealing with these mass gatherings. It’ll be hard to know if we see an outbreak in a few weeks, which was it due to: Phase 2 or this?” she said. “If you want to attend a peaceful protest, wear your mask. Don’t go if you’re sick. Turn on your location diary with the Crush COVID app and keep your contact tracing notebook.”

East Greenwich Police Chief Steven Brown said his department was prepared to deal with situations as they might arise, but he emphasized that, as of 6:30 p.m. Tuesday, there had been no threats about East Greenwich. Warwick Mall and Garden City Mall had both been the subject of internet “chatter,” he said. Both shopping areas were closed down and barricaded Tuesday.

In the event of an incident, Brown said he would rely on help from surrounding communities, just as those communities could reach out to EG police if needed.

With reporting from Suraj Sait and Hope McKinney.