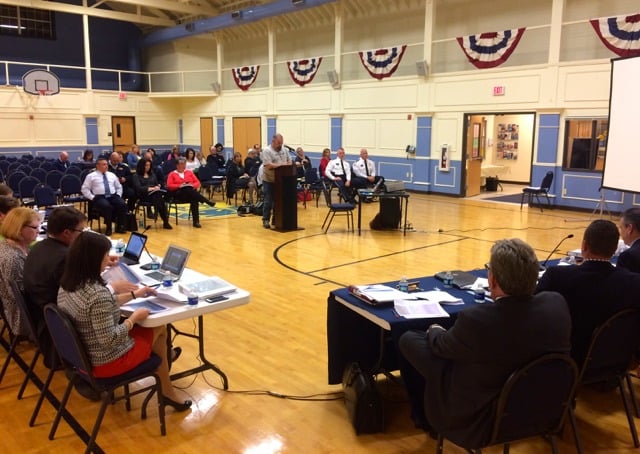 Resident Robert Vespia asks a question during the public hearing Monday night on the 2016 budget.

Citing nearly $700,000 in lost revenue next year and with the schools seeking a higher percentage increase than in recent years, Town Manager Tom Coyle outlined his $60.9 million budget at a public hearing with the Town Council and School Committee Monday night (find his budget message here). The proposal would result in a 2.03 percent tax hike if enacted, but the Town Council has until May 15 to pass a budget and the panel plans to meet Monday through Thursday next week to review the budget with the department heads. The budget will not be final until the Financial Town Meeting June 9.

The proposed budget would result in approximately a $23.73 per $1,000 assessed property value. For someone with a house assessed at $400,000, that comes to a property tax bill of $9,492, a tax increase of $174 over this year. But this is a revaluation year, so Finance Director Kristen Benoit stressed that figures are “very approximate” at this point.

The largest single hit to the town’s budget is the loss of $335,000 from Warwick to act as the first responder to Potowomut. Warwick is building a small fire station in Potowomut, which is expected to be completed by July 1, the start of EG’s 2016 fiscal year. With that station in place, Warwick will no longer need East Greenwich to act as first responder. Runs to Potowomut make up 7 percent – 245 runs – of the fire department’s total runs, according to Fire Chief Russ McGillivray.

But, he said, subtracting those runs would not result in any significant savings.

He said there could be some savings in gas (a Department of Public Works budget item), wear and tear on trucks, and manpower (if someone were to be injured while covering a call there), but that none of those were quantifiable.

Town Manager Coyle also listed $178,000 in lost revenue from the end of a four-year “transfer in debt service” that was built into the $52 million school bond issue.

On Tuesday, town Finance Director Kristen Benoit explained that loss this way: “A portion of that premium was put in a special fund to be used over four years to offset the cost debt service.”

The other two revenue hits come on the school side, through smaller payouts from the state Department of Education, $99,000 less in housing aid (school construction reimbursement) and $80,000 less in impact fees (reflecting less new residential construction).

The town’s budget includes $677,000 in capital expenditures, with the largest items being three new police cars ($125,000), a new tractor/loader/backhoe for the Department of Public Works ($140,000), and a pickup truck for the Parks & Rec Department ($60,000). The fire department is looking for $98,000 in capital expenses but that money comes out of the former EG Fire District’s impact fee fund, and thus is not supported by current tax dollars.

During the hearing, Councilor Sean Todd reviewed a list of questions the Town Council posed to the School Committee in March, on everything from school bus efficiencies (the district must have a seat for every student regardless of whether that student rides the bus daily or just occasionally, said Supt. Victor Mercurio) and bus monitors (they are state mandated and cannot at this time be replaced by cameras, re Mercurio) to health care costs (which are budgeted at $15,000 for a new hire, similar as it turns out to what the town budgets) and an increase in the line item for textbooks (even though high school students are using Chromebook computer devices now, there is still a need to refresh textbooks in the district, said Mercurio).

Town Council President Michael Isaacs restated his earlier request that the School Committee consider using $70,000 more from its $3.9 million fund balance. The school district is planning to spend $100,000 out of fund balance. It spent $170,000 out of the fund balance last year so Isaacs said he thought it was reasonable to ask that the schools do that again. EGSD Director of Administration Gail Wilcox explained why the fund balance – $1.5 million of which must be held in reserves as per agreement with its self-insurance health care program – was on the low side compared with several other districts in the state.

At the end of the public hearing, School Committee Chairwoman Carolyn Mark remarked on the difference in the two governing bodies’ budget processes – the School Department’s budget is approved by the School Committee by March 15, after a series of public budget sessions with department heads, while the town is about to begin its public budget session process (with meetings planning Monday through Thursday evening next week).

After the meeting, Mark elaborated: “I wanted them to understand that the way we do our process, before we even show them anything, we have gone through the painful decisions we needed to make to be able to present a budget that was within the realm of what the town would consider to be fiscally responsible,” she said. “They have absolutely every right to ask us very hard questions about every line item in our budget. I do not begrudge them that at all. But I just wanted to make sure they all realized we had gone through that painful process ourselves and there were cuts that we made that were self-inflicted so that we could implement the equity [full-day kindergarten] model at Frenchtown and if we had had an extra $70,000, we wouldn’t have cut our maintenance budget so dramatically.”

The School Committee cut $246,000 from its overall maintenance budget.

She noted in other years the two sides started closer and there wasn’t as much need to negotiate. This year, however, would be different.

“It’s just going to be a back-and-forth,” she said. “We just have to continue the conversation. They’re just at the beginning of their budget process.”

When asked if she hoped the Town Council would find savings to bridge that $70,000 divide, Mark said, “That would be my hope.”

About 10 residents attended Monday night’s hearing. The Town Council’s budget sessions with town department heads begin next Monday, April 20. That meeting will be held at Town Hall and will include other council business. The meetings on Tuesday, Wednesday and Thursday next week will be held in the dining room at Swift Community Center at 6 p.m.