Above: The six condominiums being built on Union Street but part of the overall 461 Main Street mixed-use project.

All around town, apartment buildings are morphing into condos, new buildings are going up and, in one notable case, a very old house has come down. East Greenwich News checked in with town building official Ernie Marinaro about various projects and got some updates.

FYI: Developers of all of these residential projects have taken advantage of the state’s affordable housing incentive program (known as a “comp permit” in EG), which allows for greater density and a fast-track through town regulatory boards in return for 25 percent of the units being made deed-restricted affordable. These comp permits are so common because East Greenwich has about 5 percent of its housing stock in the affordable category and the state mandates all cities and towns have 10 percent.

461 Main Street – This project appears to be two different projects – a rehab of an older building on Main Street and the new construction of six townhouse-like condominiums on Union Street. But they are both part of the same development known as 461 Main Street (between Centreville Bank and Union & Main restaurant). The main building that fronts on Main Street has been gutted and will have commercial space on the first floor (no restaurants allowed) and residential units above. The townhouses have garages underneath. Together, with a parking lot behind the Main Street building, there will be 41 parking spaces. In progress: The Imperial on Greenwich Avenue off of Main Street.

The Imperial and The Post (1016 Main Street) – The Imperial is that large building rising up behind the former American Legion Post 15 building on Main Street. While it’s noticeable from Main Street, the 38-unit development is particularly visible from Scalloptown Park, on the other side of the train tracks. The town gave the project the green light in 2019. After that, the developer was able to buy the Post 15 property and has gotten approval for another 30 units on that location. The Imperial is on track for completion in 2023. Read more HERE.

Franklin Terrace – The Planning Board approved this 12-unit residential development off Franklin Road last spring and the project is well under way, with 6 of the units under construction. The development sits behind Anderson’s Ski & Dive on Post Road and abuts the River Farm neighborhood. Each unit will have two stories, two bedrooms, two bathrooms and a one-car garage; three of the units will be deed-restricted affordable. All traffic will flow in and out of Franklin Road, a connector that links Post Road to River Farm. Read more HERE. Coggeshall  Preserve (62 South Pierce Road) – The Coggeshall-McKenna farmhouse, which was built in the 1700s, was torn down earlier in August, making way for eight residential units on the 5-acre property at the corner of South Pierce Road and Cora Street. Despite strong desire from neighbors and historic preservationists to keep the house and simply renovate it, years of neglect rendered it in the eyes of the developer and town officials as impossible to salvage. A replica of the original house will be built containing two residential units. The chimney, a historic hallmark, will be recreated as well. Some nearby residents have said developer Tom Primeau was not supposed to take down the chimney but the permit from the town allowed for the entire structure to be demolished. “The previous historic structure will be reconstructed like-kind in accordance with the approved plans,” Primeau said via text. He said site work has begun and building will commence in about a month. Read more and see photos of the old farmhouse HERE. 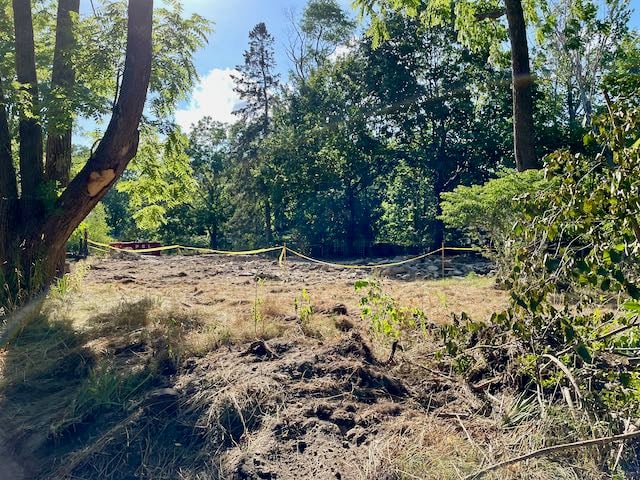 Site of the Coggeshall-McKenna farmhouse, which was torn down in early August. 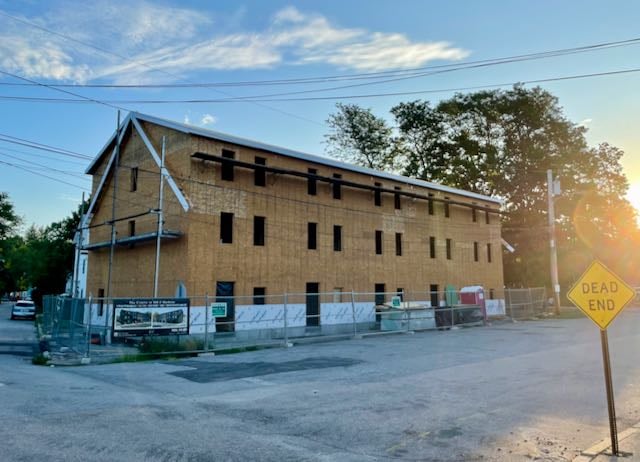 32 Exchange Street – This now-vacant lot is approved for 12 units. The house on the site was torn down in February and there has been some site remediation work but the property has been listed for sale.

38 Exchange Street – (This is NOT under construction yet but because it sits between 104 Duke and 32 Exchange, we felt it deserved a mention.) This apartment building sits between 32 Exchange and 104 Duke but the big distinction here is the developer (Touchdown Realty, also behind the 104 Duke Street project) is not seeking to tear it down. Rather, they are proposing to rehab the building and convert it into condominiums.

Brookside Terrace (1472 South County Trail) – Phase One of this 96-unit project opened earlier this year. Phase Two is nearing completion. This project is all affordable units; the apartments are one- and two-bedroom. Read more HERE.