Everyone standing in front of the East Greenwich Police Station hushed when the flashing lights of police motorcycles crested the incline on First Avenue at Kenyon Avenue. The funeral procession for Gianna Cirella from the St. Kevin’s Church in Warwick  to Quidnessett Cemetery in North Kingstown was passing by. Residents and town employees alike lined the street in front of the EG Police Department, waiting for Gianna Cirella’s funeral procession to pass by.

It took several minutes for the entire procession to pass, with its more than 80 vehicles. 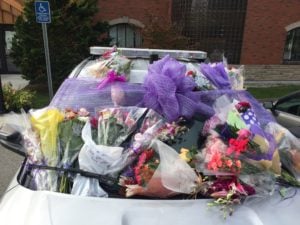 Flowers cover the hood of the purple-ribbon-bedecked police car parked in front of the EGPD. Purple – Gianna’s favorite color – was the color of the day, including these purple tights. Town Council members past and present were there to mark the procession of Gianna Cirella. From left, Sean Todd, Michael Isaacs, Mark Schwager and Marilyn Kiesel.