Family members are reporting on social media that Patricia (Patty) Daniels has died following injuries suffered in a crash early Saturday morning on Frenchtown Road. Rhode Island Hospital has not confirmed that, saying Daniels and her boyfriend, Bruce Bartels, were both still in critical condition at 6 p.m. Monday. 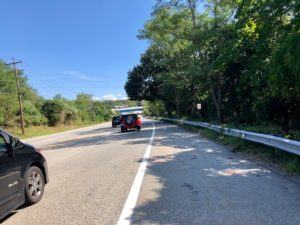 According to a press release, police were called to the accident scene shortly after midnight, Sept. 7, on Frenchtown Road just east of Davisville Road. They found one car up against the guardrail and the other on its side, with two occupants still inside. Firefighters from East Greenwich and North Kingstown acted to get the two people out of the car and treated others on the scene.

Trojan, who was alone in her car at the time of the accident, and the four occupants of Daniels’ car were taken to Kent and Rhode Island hospitals. Only Patty Daniels and Bruce Bartels remain hospitalized.

Fire Chief Bernie Patenaude said Monday Patty Daniels and Bartels had been in the back of Donna Daniels’ car and had to be cut out using the “jaws of life” tool. In total, he said, six rescue trucks responded to the accident. In addition to rescues from EG and NK, rescues from Warwick and Coventry were on the scene.

According to a GoFundMe page set up by her neice, Patty and the others in the car were returning from a family wedding at the time of the accident.

EG police are still investigating the accident and are in contact with the state Attorney General’s office regarding the possibility of criminal charges, if any.