The program comes in response to safety concerns for children walking to school. 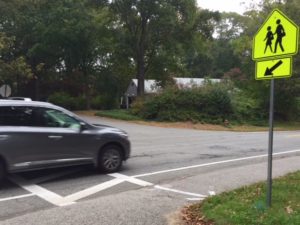 The crosswalk at Allen Drive on Middle Road.

One of the complaints that arose in September after the school district cut the Cole bus for students in the Hill and Harbor neighborhoods was that cars repeatedly blow through crosswalks even when a person is waiting to cross. By law, if a person is standing at a crosswalk, cars are obligated to stop so the person may cross.

The district chose to eliminate that bus because students in those neighborhoods are within a 1.5-mile radius of the school and when looking at bus routes last year, the district decided to more strictly enforce walking distances. (For the elementary schools the distance is 1 mile, for the middle school, it’s 1.5 mile; and for the high school, it’s 1.75 miles.) But parents from the Hill and Harbor neighborhoods weren’t the only ones to complain about dangerous crosswalks. The crosswalks on Middle Road were also singled out by parents of younger children who walk to Hanaford.

School officials decided to bring the issue to the town, noting that street safety was ultimately a town issue.

The immediate result is a volunteer crossing guard program run by EG police. The EGPD will train and organize the volunteers. The trainings will take four hours and first two dates are Thursday, Oct. 12, at 8:30 a.m., and Wednesday, Oct. 18, at 3:10 p.m. Volunteers will need to complete a background check (BCI). Police will provide the vests. Here’s where you can sign up to volunteer.

Which crosswalks will be staffed with the volunteers has yet to be determined and will depend on how many people sign up to volunteer. Crosswalks on Middle Road and First Avenue have been the ones mentioned most often by parents.

Police Chief Stephen Brown acknowledged Friday that drivers often pass through crosswalks even when a pedestrian is waiting to cross, but he said that pedestrians need to follow basic rules too.

Parent Danielle Ditraglia has spent a lot of time at crosswalks on Middle Road – her two children need to cross Middle to get to Hanaford and Cole. (Check out her Middle Road crosswalk videos here.) She is not a fan of the new volunteer plan.

“I think it’s a terrible idea,” she said Friday. “I think it opens up the town to huge liabilities, as well as the individual people who are volunteering. I also think that by making these positions volunteer there is going to be a large problem with attendance and consistency. It is a completely rash Band-Aid-type solution to a huge problem.”

“Great news for our kids and the entire EG community!” wrote Joy Richter Weisbord. “Where I grew up, older kids served as ‘safeties’ for the younger kids and it created a very positive feeling in the community that we were all looking out for each other.”

EG resident Ben Revkin (who teaches Latin at the high school) was more circumspect. “A Band-Aid, but definitely better than nothing,” he said.