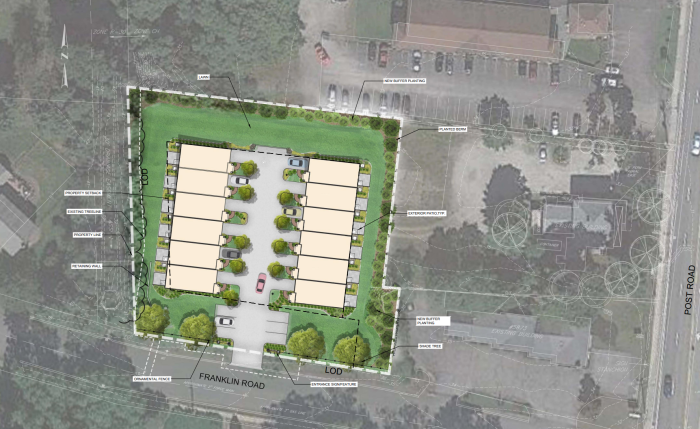 Above: The 12-unit Franklin Terrace development planned for behind Anderson’s Ski & Dive.

The Planning Board approved 12 residential condominiums off Franklin Road earlier this month in a 5-0 vote. Property owner John Holmander had originally proposed a microbrewery for the site, which is located behind Anderson’s Ski & Dive on Post Road.

Residents from the nearby River Farm neighborhood had raised objections to the microbrewery plan and the project did not get very far before Holmander opted to go with a residential development instead. By making 3 of the 12 units affordable, Holmander was able to apply for a “comprehensive permit” – a state-enabled incentive allowing developers to build more units then would normally be allowed without a zoning variance. The threshold for comprehensive permits is 25 percent affordable, exactly what the Franklin Terrace project plans.

The project gained initial Planning Board approval last June (read more HERE). This final approval means construction can begin on the two-building project. Each building will have six two-story townhouses, each with two bedrooms and two bathrooms and a one-car garage in front. All traffic would flow in and out of Franklin Road, a connector that links Post Road to River Farm.

At the April 6 meeting, three River Farm residents spoke in opposition to the project, but some of their objections were over issues – such as the number of units – that were already approved in the “master plan” phase.

One objection was over potential flooding with the new development but the project engineer said all runoff will be contained on the property, with roofs draining into the central driveway or into pipes that feed into a “cultec” runoff system.

Another concern had been about the increased traffic that could result from 12 new residences. “We don’t think there will be any traffic issues,” said Joe Giordano, traffic engineer for the developer. He said any other use for the property would create heavier traffic than what is now planned. “A 12-unit residential development is a very low traffic generator,” he said.

Chestnut Drive resident Andrew Shartenberg’s property abuts Franklin Terrace. He said he just bought his house in October and said the landscaping plan did not provide enough privacy. While there are extensive new plantings planned for other sides of the property, the western side – the side that abuts Shartenberg – has a number of existing trees. They are, however, deciduous, so they will be bare during the winter.

He also said he would prefer fewer units but board Chair Ben Lupovitz said there was nothing the Planning Board could do at this point regarding the number of units.

Another nearby resident, David Gesawich, said he was concerned that in the event of a power outage, sewage would back up, since the Franklin Terrace units will rely on an electric grinder to move sewage up to the main line. He said they would need a generator.

The engineer for the project said there would be a generator installed. The development will need to provide an annual report to the town that it is keeping up the pump station as well.

Lawyer for the town Peter Skwirz said the challenge with comprehensive permit projects is if the town were to deny approval, the developer could then appeal to the state Housing Appeal Board (SHAB) which almost always sides with the developer since the state mandate is to provide affordable housing. Each city and town is required to have 10 percent of its housing stock in the affordable category – East Greenwich is at just over 5 percent.

The board also approved a rooftop solar panel project for 816 Middle Road, a commercial building with a 14,619 sq. ft. roof that sits between Sweet Peas Village and Middleberry condominiums. 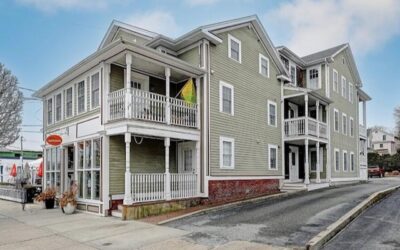