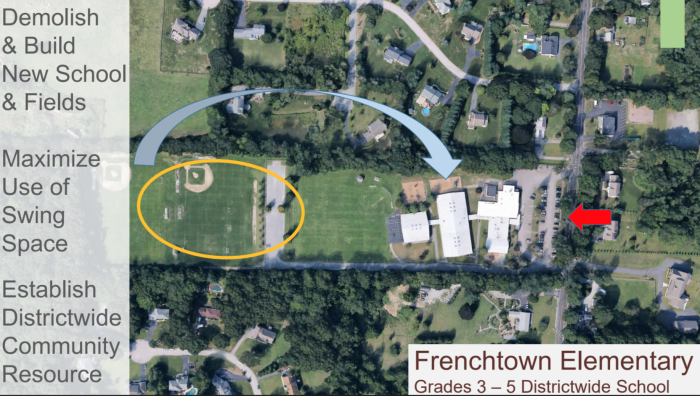 Above: The proposal for Frenchtown is to build a new school for all grade 3-5 students behind the present school, then move the field space now in back to the front.

The School Committee heard the Building Committee’s recommendation to update and expand learning spaces at a virtual meeting Tuesday evening – a plan that includes construction of a new Frenchtown School for all students in grades 3 through 5, and the decommissioning of Eldredge as a school. The estimated cost for the proposal was $105 million.

Representatives from project manager Colliers, planner Civic, and architect Brewster Thorton said the plan answers the district’s educational and spatial needs and would recoup as much money from the state as possible. Under this plan, the state would reimburse 52 percent of the cost – the basic 35 percent allowed for a district like East Greenwich (more needy districts are in line for as much as 90 percent reimbursement), as well as a variety of incentives (for things like health and safety modifications, new construction, and fewer overall school buildings).

The plan outlines significant changes on the elementary level. Consultants cited four reasons for this:

Meadowbrook and Hanaford elementary schools would be renovated and expanded, both to provide additional space and to create collaborative spaces, more open areas for students to work in small groups together. Meadowbrook would remain and Hanaford would become a K through 2 school. Under the plan, Meadowbrook would also get a separate gym – right now, the cafeteria and gym share the same space. 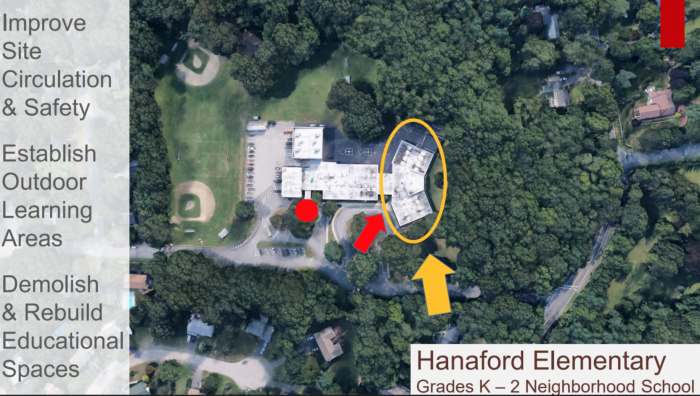 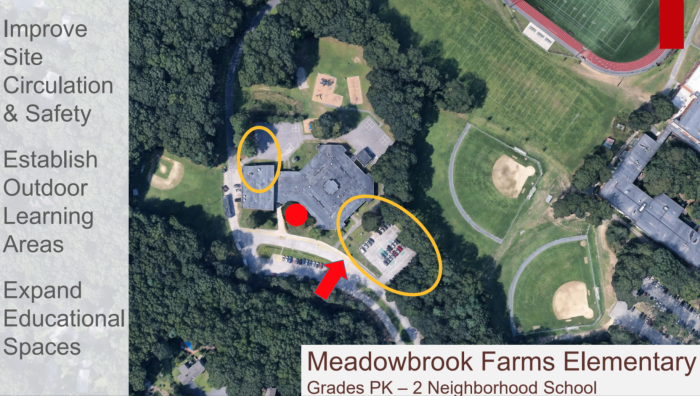 Frenchtown – ironically, the current school is only one in the district that has collaborative spaces – would be the site of a new school for all third through fifth grade students. That site was chosen because there is plenty of room to build a new school behind the original school, alleviating the need to find space for Frenchtown students during construction. (The fields in back of Frenchtown would be moved to the front of the property.)

Eldredge, the oldest school in the district by far and the town’s showpiece for many decades, would be taken offline as a school, used instead for school administration and, potentially, other community needs. This would be done because adding on to that building and creating those desired 21st century learning spaces would be both costly and potentially impossible, the consultants said.

“Eldredge as a structure could absorb a significant amount of dollars and you’d still have a 19th century learning space,” said Nate Ginsburg, one of the architects on the project as well as a member of the town’s Planning Board.

Frenchtown would be a transition between smaller neighborhood schools and the middle school, said Ginsburg. And, because it would accommodate all grades 3-5 students, they would all benefit from the new school, as opposed to having half of the students in a brand new school and the other half in an older school, for instance. As a side benefit, placing the school in the back would alleviate some of the traffic buildup that happens on Frenchtown Road at drop off and pick up, since there will be a longer drive to the school. 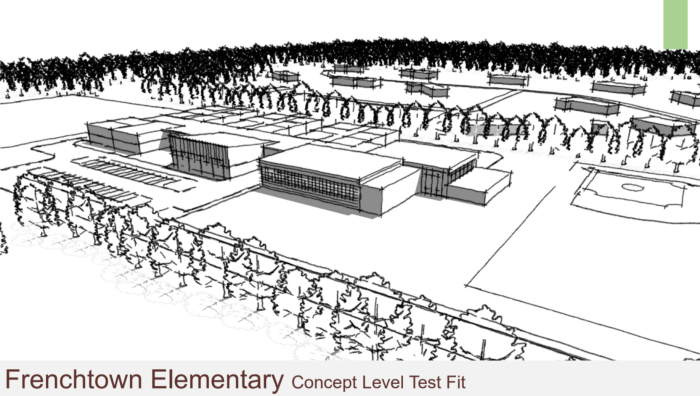 The plan included no significant changes for the still relatively new Cole Middle School, opened in 2011, although Chris Spiegel of Colliers said Cole would be part of the final plan.

The issues at East Greenwich High School include improving “site circulation and safety” (a reference to the only way in and out of the school, via Avenger Drive), enhancing the courtyard and building additional classrooms that would push out into the courtyard, adding new locker rooms, and enlarging the life skills suite (for students with more significant disabilities). The auditorium would also be renovated.

Members of the School Committee were largely laudatory in terms of the work that has gone into this plan thus far but after lengthy discussion, they were not ready to vote. Approval when it comes will allow the architects to continue their work in preparing a State 1 submission to the state Department of Education (RIDE).

Committee member Tim Munoz asked about having potentially 650 students at the new school at Frenchtown, noting that would be more students then are at Cole. “To me this is a big strategic decision and I don’t know if we’ve discussed that,” he said, especially in light of the fact that the district will be living with whatever happens for decades to come.

Spiegel, of Colliers, said each grade would represent a separate “learning academy.”

Supt. Alexis Meyer, who as Cole principal was intimately involved with the construction and early years there, said the larger Frenchtown would operate something like Cole has done with its team approach. “The critical aspect will be creating smaller spaces within the larger space,” she said. “The most important thing is the culture in those spaces you create.”

Munoz also asked if a completely new site had been considered for a new school.

“Having been on the [East Greenwich] Planning Board for seven years, I’ve seen how it’s been so difficult to find new sites for a new highway garage, for instance,” said Ginsberg. “I do not think the town is on the cusp of providing new land.”

Committee member Nicole Bucka said she was happy with the plans in general, particularly the plan for a separate gym at Meadowbrook and the decision to place the new Frenchtown school farther back from Frenchtown Road. But she agreed with Munoz regarding the larger school for grades 3-5, and wanted more staff feedback, especially from teachers and staff of those grades.

She also asked what had prompted the group to push for Option 4 (the plan they adopted) versus the less expansive (and less expensive) Option 3 (read about those different options HERE). “What was the deciding lever?”

“The big reason was equity,” said Spiegel. “The best example of how one school would be left behind if we did Option 3 is Eldredge. We could bring up the other schools but not really for Eldredge.”

“This is a terrific opportunity without question provided we can do the financing,” said Committee member Gene Quinn, who added a bit later, “Historically, this town built five schools between 1957 and 1970…. We’ve taken on big projects before.”

Committee Chair Anne Musella said she echoed what others had said about wanting to take advantage of “this once-in-a-generation opportunity.”

But she questioned the wisdom of putting the new school at Frenchtown. “We would be doubling the capacity of the only school that is west of Route 2,” Musella said. Two additional buses, for instance, would be an extra $200,000 added to the district’s annual operating budget, she said, noting the district had a way to cost that scenario out.

She added, “There’s been a lot of talk, a lot of interest in making the town more walkable, more bikeable. I just want to make sure that’s not overlooked.”

Frenchtown is the only school where nearly all students are either bused or driven, because of its location on busy Frenchtown Road.

Parent Lillian Picchione said she hoped planning could include mockups for students and families who want to walk or bike to school. “This is a good opportunity to support those concerns,” she said.

Parent Denise Lopez noted that as a graduate of EGHS herself, she well understood the need for renovations. But she wondered if there was a way to stagger the work, so as to avoid unexpected or unintended consequences.

“The directive to the architects is to be flexible,” said Spiegel. “We don’t want the Stage 2 we submit to just reflect one moment in time.”

Manuel Cordiero of Civic noted the construction cost bonuses from RIDE won’t last forever. “The timeline has to align with the statutory bonuses that are set to sunset. We will be paying attention to all of that.”

Spiegel stressed that the plans are being designed to be flexible, through ups and downs in the number of students. “We can adapt through bubbles,” he said.

Lorraine Martin asked about the timeline for the project. Right now, the district is hoping to present the Stage 1 application to RIDE in September, with a Stage 2 submission in early 2023. A bond referendum would follow, probably in spring 2023. Cordeiro (of Civic) said it was reasonable to estimate a five-year timeline from there – so completion could be in 2028.

The School Committee will take up this plan again in April.

What Do You Want EG Elementary Schools to Look Like?