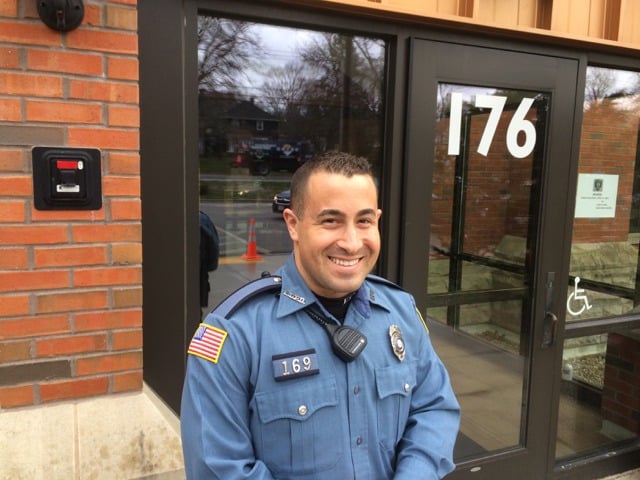 Patrolman Matthew White was only blocks away, Friday, April 3 – Good Friday, as it happened – when dispatch radioed about a man, possibly drunk or high, on the train tracks near the London Street underpass.

“I was in the right place at the right time when the call came in,” said White. “I was at Main and First, right at the intersection, heading north on Main Street when I got the call – lights and sirens, took a right on London, parked my car and just ran up to the tracks.”

As it turned out, he needed to be that close.

The man, who White recognized as someone who lives downtown, was about 50 to 70 yards away, south of the underpass, lying down on the western-most track. In the distance, White saw the train.

“I could see, running down the tracks towards him, the train coming. So I radioed to dispatch, ‘Have we stopped the trains?’ They confirmed they had. I said, ‘There’s a train coming northbound, towards us.’

When he reached the man, White realized the man was too impaired to get himself off the tracks. And, too, the man seemed to be there on purpose.

“When I first tried to move him, he was dead weight. Then he realized what was happening and grabbed on to the rail on the track and wouldn’t release his grip.”

The man kept saying, “Let me go. It’s over. It’s over,” White wrote in his report of the incident.

Meanwhile, the train – White thought it was the Acela, the high-speed train, which probably hadn’t had time to stop – was closing in.

“I had to break his grip somehow,” said White. He struck the man twice on the shoulder blade. It worked. The man’s hands came free.

“I was able to grab him and flip him over and throw him over my left shoulder and I turned toward the fence,” White said. “At that point, the train was right there. I could see the driver. The only thing I could do was toss him from my shoulder over onto the grass. But I no longer had control of him at that point. So I jumped off the tracks to avoid getting hit by the train, and jumped on top of him to keep him safe.”

The area on the tracks where Patrolman Matt White rescued a man April 3.

The train was loud, and forceful.

“You could feel the wind on your face.”

But the man was still fighting.

“He was flailing his arms, kicking, screaming, trying to get to that train. My worry then was that another train was coming from the same direction,” said White. He decided he needed to get the man over the 4-foot fence, farther away from the track.

Again, the man was dead weight. Again, White hoisted him over his shoulder and lifted him over the fence.

“At that point, I could hear everybody else coming – the sirens – so I knew that my backup was close. I just flipped him over. Proned him out on his stomach. I got his hands behind his back and cuffed him so his arms were no longer a threat.”

How much time had elapsed since he’d gotten the call? White isn’t sure, maybe a minute, maybe two.

“I think time is warped in that sort of situation,” he said. The man was taken to Kent Hospital for evaluation and detox. He was charged with trespassing on railroad tracks and has since returned home. White said he’s seen the man, who has waved at him, but they have not discussed the events of April 3.

White credited resident Heather Fague for calling 911 after she watched the man make his way over the fence and onto the tracks. She called to the man but he didn’t respond.

“He proceeded to walk southbound, where he finally fell and didn’t get up,” Fague wrote in a witness statement. “From where I was, it looked as if he was trying to kill himself…. I called 911 … after I realized his intention.”

“The call was good,” said White of Fague’s 911. “She said who it was. She said where he was. She stated that he was intoxicated. That gave me some time. When you’re responding to calls like that, it’s good to have a plan.”

He continued, “Of course, you try and plan it all. But you get there and you just act. It’s not even something you’re thinking about. This guy is going to die if I don’t move him. I need to move him. And if I stay out here much longer, I’m going to die. What am I going to do? You just act.”

White, 29, has been on the EGPD for three years. He is married and lives in South Kingstown.

When asked if he told his wife what happened, he said he had.

“I tell her things, but I don’t tell her things. I thought she needed to know about this,” said White. “She worries every day when I go out on the job. The last thing she says to me every night without failure is, ‘I love you. Stay safe.’”