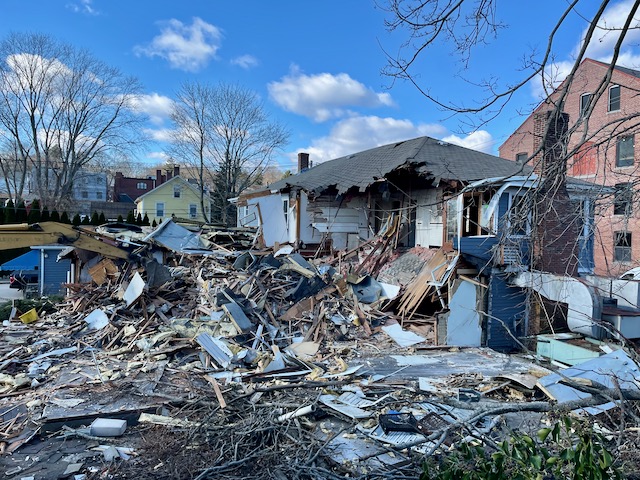 Above: The view of Pal’s from the back Dec. 19, the first day of demolition.

Dec. 20, 2022 – Demolition of the former Pal’s Restaurant, at the corner of Division and Duke streets, started Monday, putting a finishing touch on the long history of a quintessentially home-grown, Italian-American eatery. Four houses are planned for the site, with three additional houses planned for the adjoining parking lot.

Dismantling the building will take a few days, according to Ron Goldsmith, whose company Contemporary Landscaping is handling the demolition.

Because the building is in the town’s Historic District, the application to demolish it had to be approved by the Historic District Commission. They voted in July to allow demolition (read the staff report here: July 19 2022 staff report). According to the survey by the state Historical Preservation and Heritage Commission, the 1880 mixed-use late-Victorian 2-story building, the building got zero points for both architectural and historical value and 5 points (out of 14) for importance to the neighborhood. It added:

“The exterior siding consists of vertical boards on the first floor and shingles on the second floor. The building’s original integrity has been altered over the years by the use of modern materials. Glass block has replaced any window sash on the first floor with the main entrance facing Duke Street.”

Of course, Pal’s held a lot of cultural importance for decades in East Greenwich. However, for Terry Romano, the last family member to own the building, it was time for something new in that location. Romano was standing at a distance Monday as the excavator slowly but methodically dismantled the building. Pointing to a chimney exposed in the back part of the building, she noted that was where family members always posed for pictures.

According to Romano, her grandparents, Gioacchino and Fortuna – Jack and Annie – Palermo, bought the building in 1920 and opened up a mom-and-pop grocery on the corner of Duke and Division streets. In March 1933, the month Prohibition was repealed, they turned it into a pizza restaurant serving beer and wine, calling it “Palermo’s Restaurant.”  It did not take on the name “Pal’s” until the early 1950s.

Romano said the children worked in the family business. When her grandfather died following World War II, her uncle Frank, who was a cook, took over. He expanded it with the help of his brother Arthur and sister Teresa (Romano’s mother). my mother. Teresa eventually took over the business with her husband, John Romano. “My parents sold the business in 1995 to Amicos,” Romano said. See a newspaper article about the purchase below:

Another building in the town’s Historic District has been approved for demolition – 67 Queen St, a house at the top of Queen Street across from the EG Veteran Fireman’s Hall. The HDC voted on it in November. That structure does not appear on the state survey of historic properties and the property sits partly on a town right of way.

The HDC visited the property in September and, according to notes from the visit by Asst. Town Planner Bruce Lofgren, the panel found “the existing structure does not appear to contribute in any significant way to the historical context of the district.”

In addition, the panel found “no exemplary architectural features or details that would necessitate the structure’s preservation. What would normally be considered significant are masonry details/ornate chimneys, turned woodwork, original slate or shingle roofing, original windows, original siding and or trim, and other irreplaceable details.” The windows, siding, roof are not original, the panel said, and various additions provide add no value.

While the developer, Thomas Gerald LLC, now has permission to tear down the structure, Jerry Zarrella Jr. of Thomas Gerald said Tuesday, they are looking for someone to purchase the building and move it. Plans for the site haven’t been unveiled but Zarrella said it would be a mixture of housing and additional parking.

*Editor’s note: My husband, Neal McNamara, is a member of the Historic District Commission. 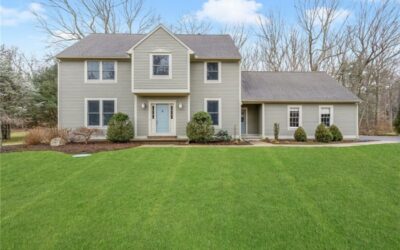 Above: 35 Sheep Farm Dr, East Greenwich Data is compiled via Riliving.com as of Friday midday,...