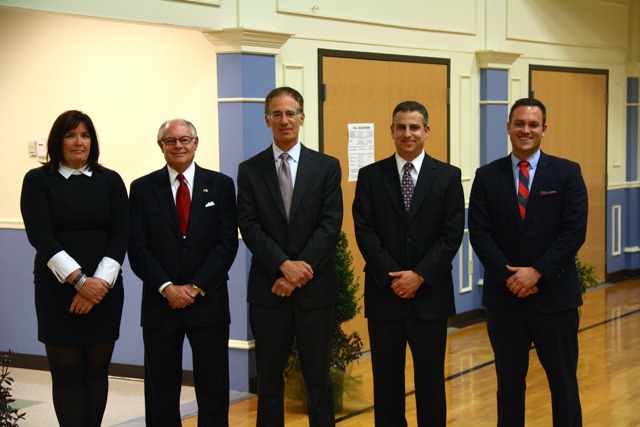 There are dozens of television shows on air that portray the exciting, scandalous, risky lives of government officials. Shows like The West Wing and House of Cards depict high-level politics, complete with scandals, court cases, and lots of ethical dilemmas. There are heroes, there are villains, there are friends and lovers, enemies and liars. Some shows, like Parks and Recreation focus on smaller, local government in towns similar to East Greenwich. Even in these shows, there is plenty of drama and intrigue. So, the question is, are these shows anything like real life? Is being on the East Greenwich Town Council anything like the political television shows say?

On Tuesday, East Greenwich’s newly elected Town Council members began to get an idea of what exactly being a town councilor entails when they attended the council’s orientation meeting. Councilmen Isaacs and Schwager have both served previous terms on the council, so they already know what the job is like, but newcomers Cienki, Todd, and Stone were introduced to the rules, policies, and procedures of the Town Council and they were warned about certain TV-worthy situations that can arise. While there may not be any hired killers or villainous officials, the job does come with some excitement.

For instance, the town councilors were told how not to get sued. That means not violating the Open Meetings Act, a law requiring all council meetings be posted ahead of time with an agenda. And not taking votes unless they are announced ahead of time.

In 2001 and 2002, the Town Council was sued for just such violations. The case Tanner v. the Town Council of the Town of East Greenwich went to the state Supreme Court, which found the council had violated the Open Meetings law. At Monday’s orientation, the councilors were advised to be aware of this law.

Town councilors were also warned that if they ever want to speak about the character, job performance, or health of a town employee during an official meeting, they must first notify that individual.

Another important note was on competitive sealed bidding. To avoid any sort of corruption, bias, or partiality (such as one would see on a popular political drama), council members are advised to submit recusals if they believe there are any conflicts of interest in the matter. For example, if a family member was bidding, or a co-worker, then a councilor should submit a recusal so his/her vote does not call the decision into question.

During the meeting, Cienki, Stone, and Todd had many questions. They were all actively taking notes and following the discussion closely. Todd seemed to be curious about the Housing Authority, and everyone else was curious about his socks. The young newcomer added flair to the meeting by wearing striped Christmas socks with his dress shoes.

So, while the excitement on the East Greenwich Town Council may not be comparable to primetime television, the job is still quite exciting, complete with courtroom drama, conflicts of interest, lawsuits, and striped socks.

Catherine Streich is a senior at East Greenwich High School.