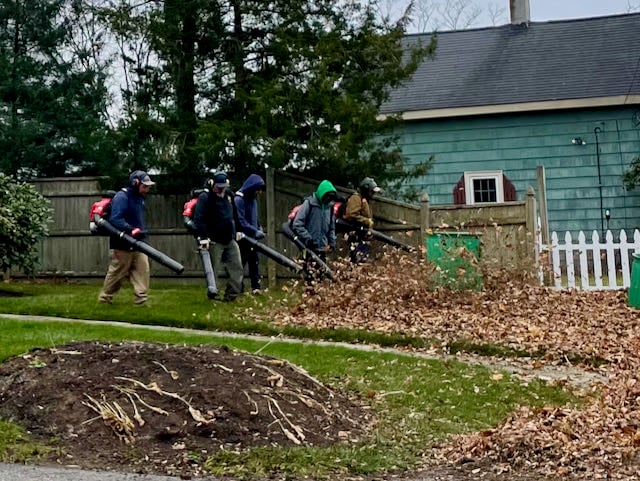 Above: Leaf blowers on Vine Street earlier this week. 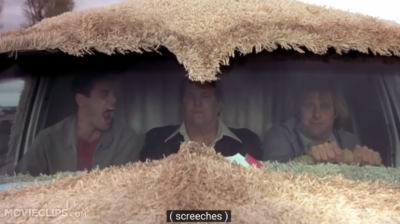 “Wanna hear the most annoying sound in the world?” asked Lloyd Christmas (Jim Carrey) in the 1994 blockbuster comedy Dumb & Dumber. Without a word of affirmation from his two front-seat-mates, Lloyd proceeded to produce an instantly iconic sound that the subtitles understatedly described as “(screeches).”

Sure, it was technically a screech, but it was so much more. It was a totally unnecessary, borderline sociopathic, prolonged, aural assault. Joe, riding middle next to Lloyd, could only take it for two-and-a-half seconds. But, I do give Lloyd credit. He asked first. He clearly told Joe and Harry what they were in for. They could have said no. The rest is Hollywood history.

I’ve lived in East Greenwich since 2016. I run my own graphic design business. I’ve worked from home since pre-pandemic 2019. It wasn’t until fall 2020 that I noticed a proliferation of gas-powered leaf blowers disrupting work and my otherwise quiet neighborhood. My reaction was bemusement. I joked about gas leaf blowers on Facebook, shared a few articles that expressed similar annoyance. I didn’t realize it then, but a pattern was forming.

Fast-forward to April 2021, “Spring Cleanup Season” for residents and commercial landscapers alike. “The most annoying sound in the world” began to penetrate my neighborhood and my head with alarming intensity. Coincidentally, on April 12, The Public’s Radio program Possibly ran a piece outlining the environmental problems related to gasoline-powered lawn maintenance tools:

“As opposed to the four-stroke engines that cars use, two-stroke engines slosh together a mixture of gas and oil in the combustion chamber because they don’t have a separate lubrication system. These engines spew out as much as a third of that fuel unburned, which releases pollutants like carbon monoxide, nitrous oxides, and hydrocarbons into the air.

“How much pollution are we talking about here? A 2020 study by the California Air Resources Board found that engines such as the ones in gas-powered leaf blowers create a lot of smog-forming gases – more than the state’s 14.4 million passenger cars combined!

“What does that mean for someone who’s just using a leaf blower a few times a year? Even that can create a lot of pollution. Think about how long someone typically uses a leaf blower. Let’s say an hour or so. According to the same study, that would release the same amount of smog-forming pollution as driving a twenty-seventeen Toyota Camry for more than a thousand miles.”

I figured gas leaf blowers were bad, but I didn’t realize they were that bad. Possibly went on:

“What about the noise? Gas-powered tools are much louder [than electric tools]. The U.S. Centers for Disease Control and Prevention warns that using the average gas-powered leaf blower for two hours can have a harmful impact on your hearing.”

I immediately emailed our Town Council, asking them to work to ban gasoline powered leaf blowers from the Town of East Greenwich. Similar bans have been approved in Burlington, Vermont and, um, THE ENTIRE STATE OF CALIFORNIA.

One of the town councillors responded asking for noise readings, saying, “There is a noise ordinance and perhaps [the noise] may fall within those limits.”

I replied, “I’d be happy to take some noise readings. Does the town’s noise ordinance enforcement team have any equipment I can borrow?” I was being admittedly smarmy.

“I think what people have been using is their phones,” replied the councillor.

I inferred from that response that multiple residents had been using phone apps to take decibel readings and report noise complaints to the town. I took some solace from that, thinking, “OK, some residents are on this issue. I’ll research some apps, maybe some dedicated decibel meters, and prepare for Fall Cleanup Season.”

Meanwhile, a second councillor responded to me. “[Town Manager Andrew Nota] seems to think it is more realistic to regulate time of use rather than ban them.”

“I’ve yet to hear a time of use appropriate for a gas leaf blower, so I don’t have much faith in Mr. Nota’s plan,” I replied. But, at least the town seemed to have an awareness of the problem, and a rudimentary plan of regulation in place.

Fast forward from April to November. I had my new decibel meter unboxed (the phone apps didn’t have great reviews). The leaves were falling. It was only a matter of time before – as Margaret Renkl said in her October New York Times essay – “the monsters arrive.”

And arrive the gas leaf blower monsters did! If I thought Spring Cleanup Season was bad, it was no match for Fall Cleanup Season. It seemed like any day, at any time of daylight hours, I could hear a droning buzz from inside my house. Walking outside to confirm, it was clear – loud gas-powered leaf blowers operating blocks away in other neighborhoods could be heard from inside my house!

When the monsters arrived in my neighborhood, I was ready. Multiple times, I walked from my house to the sources of the noise, decibel meter powered on, smartphone video camera recording the growing decibel reading – 60 decibels, 70 decibels, 80 decibels, 85 decibels!

The town’s noise ordinance is written to be accessible. It’s concise, appropriately broad, but with specific and reasonable exceptions to the ordinance. It reads in part:

The ordinance language makes clear that the maximum permitted noise level from 7 a.m. to 10 p.m. in any residential district is 60 decibels.

I had my noise readings, as the first Town Councillor had requested. I had the ordinance. I had video of the ordinance being broken. All that was left to do was phone the East Greenwich Police Department’s non-emergency line and file my report. Surely the EGPD would respond appropriately, ask the landscapers to cease operation of their unacceptably loud gas-powered leaf blowers, maybe issue a warning that a fine would follow in the future, and I could return to the peaceful sanctitude of my home on a lovely, crisp fall day.

Unfortunately that’s not how it went down.