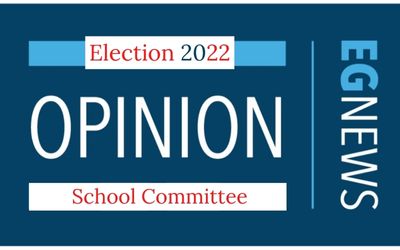 Submissions are welcome – send to [email protected]. The last day to submit an opinion column (or letters to the editor) about the Nov. 8 election is Oct. 25, two weeks before election day (11/8).

The East Greenwich Free Library has copies of the annual East Greenwich “tax book” back to 1880. Each contains a legal document called the “Recapitulation Page” on which the tax assessor certifies the tax levy, assessed value, and tax rate for that year.

To understand why it fell, see the writeup of the candidate forum sponsored by the League of Women Voters in the November 2, 1950, issue of the Rhode Island Pendulum. In response to the question, “What are your suggestions for financing a new public high school?”, future tax assessor I. Glenn Seavey replied “tax revaluation” and very clearly explained that debt service on the anticipated $800,000 bond would require a tax rate higher than the statutory limit of $25 per thousand, unless we did a revaluation.

Before the advent of periodic revaluations, assessed values of homes with longtime owners were artificially low. Seavey argued that because revaluation would increase many property values, the tax rate would fall to a point that the town could issue the school bond and stay under the $25 cap. He was correct, even though the effect of revaluation on individual homes varies.

East Greenwich built five new schools in the period between 1957 and 1970. In 1976, inflation was very high (I’m old enough to remember president Gerald Ford’s “Whip Inflation Now” campaign), and the bulk of the debt from five new schools would have still been on the books, yet the tax rate ended up at $23.70 after the 1976 revaluation, close to recent values.

As we contemplate timely investments in our school infrastructure (my colleague Alyson Powell recently submitted a 700-page Stage 1 document to RIDE that starts the process of obtaining up to 52 percent state funding), it is worth remembering that East Greenwich has a history of completing such projects without driving the tax rate through the roof. I have every confidence that our current town and school administrations, Town Council, and School Committee will be able to continue this tradition.

Paradoxically, operating expenses and debt service have a small effect on the tax rate compared to real estate prices and revaluation cycles. In the 70 years since periodic revaluations began, the tax rate has only gone down in mid-cycle twice: 1958 and 2017. In 2017 the Town Council took a series of drastic and unsustainable actions including level-funding the schools and raiding fund balances in an effort to lower the tax rate. A lot of damage was done, some of which threatened our high school’s accreditation. In the end, the result was a drop of 43 cents in the tax rate, from $24.09 to $23.66.

It’s an election year and calls to repeat this mistake are circulating. One of the first actions our current Town Council took was to provide a supplemental appropriation, which suggests that they will not heed them.

The fact that our tax rate has been “stuck” in a narrow range for a century begs the question of why our tax rate is what it  is. There are three main reasons.

First, East Greenwich is not particularly wealthy in the way that produces low tax rates. Town historian Bruce Macgunnagle told me that 100 years ago, East Greenwich was a community of farmers, fishermen, and a handful of merchants on Main Street. In assessed real estate value per capita, we rank 11th. Small shorefront communities have two to five times as much assessed value per person as we do, and this accounts for their $6 and $8 tax rates.

Second, East Greenwich receives much less education aid than many towns. If every town had to raise what it gets from state education aid through property taxes, our tax rate would rank 19th. I will be working with Rep. Justine Caldwell to provide input to the planned revision of the RIDE funding formula.

Third, East Greenwich has more public school students per capita than any other community except Barrington. I think this says a lot about the quality of our schools.

As a 46-year resident, I have lived through much of the history described here, and along the way paid several hundred thousand dollars in property taxes. I’m proud of the town and schools that my tax dollars helped build, and want to see them preserved.

East Greenwich has long had a reputation for good government and excellent schools.  It has been my privilege to be part of that tradition.

If reelected, I will continue to advocate for evidence based, data-driven policymaking, careful, in-depth analysis, and good relations with the Town Council.