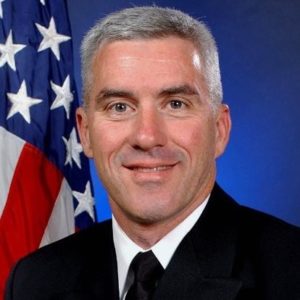 Russell Knight was one of the final candidates for town manager of East Greenwich. Council President Sue Cienki called him Thursday, June 21, to tell him they were going with current manager Gayle Corrigan instead.

“She said they wanted continuity,” he said in an interview Friday.

The council will vote on Corrigan’s appointment as permanent town manager at its meeting Monday.

Knight, who lives in East Greenwich (down the street from Town Hall, actually), is a former U.S. Navy captain who was the base commander in Meridian, Miss., for three years, then chief of staff and deputy commander at the Naval War College for four years, before retiring in 2012. Since then, he worked as public works director for the City of Providence for a year and a half, and now is a naval science instructor at Oxford High School in Massachusetts. He also was the president of Summer’s End here in East Greenwich from 2009 to 2012.

Knight said he was surprised by the Town Council’s decision.

“I had a pretty good feeling coming out of the interview with the Town Council,” he said. In addition to having a lot of administrative experience, Knight said he thought his love of East Greenwich and willingness to commit to the job for an extended period were major pluses.

Knight said he applied to the job in December and didn’t hear anything at all for several weeks. He said he reached out to Town Solicitor David D’Agostino in January, to make confirm that his resume had been received and to check in the process. The next day, he got an email that he was among the candidates that were chosen to be interviewed by the volunteer Town Manager Search Advisory Committee.

He was one of two or three candidates interviewed by the Town Council – Councilor Nino Granatiero has declined to give a specific number of candidates. His interview took place in May. Also in May, the Town Council met in executive session for more than two hours to discuss the town manager applicants. After that meeting, Granatiero said the council needed more time. After the budget was passed June 6, he said the council would be ready to vote on the town manager at its next regular meeting, on Monday, June 25.

Knight has been a regular at Town Council meetings for the past year. He said he did not like what he’s been seeing.

“There are so many things I would do differently,” he said. “The inappropriate hiring practices, the poor morale with the [town] work force, the departure of some of our best and most loyal town employees, the decision-making being made without a proper presentation of the cost and benefit analysis, as well as ethical questions that detract from dealing with the real issues.”

He applied for the position because he thought he could make a difference. That didn’t change over the intervening months, but a sense of duty kick in too. When an acquaintance asked why he wanted the job, considering the challenges and divisive atmosphere that’s blanketed the town this past year, he said he felt like he had to offer what he could.

“My strength is team building and collaboration and making teams work together,” he said, adding “I have a loyalty to this town.”