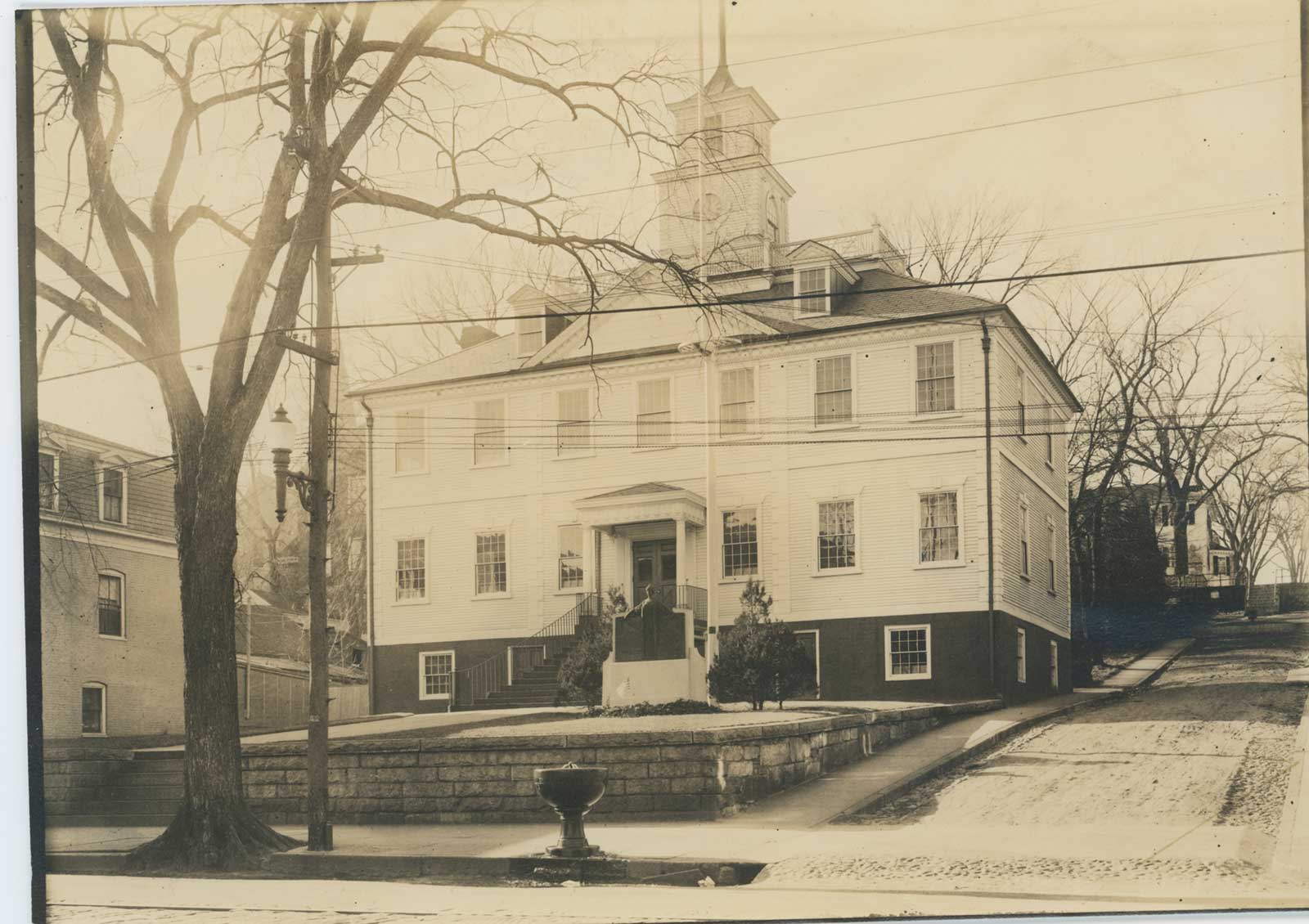 The jewel in the crown in East Greenwich was the Main Street. The street was about one mile long and housed most of the businesses, churches, restaurants, drug stores and barber shops to name a few. Main Street was also known as US 1 or the Post Road. The thing that set apart our Main Street from other towns was the Dutch Elm trees that lined the full length of the street. In the summer when they were in full bloom it was like diving through a tunnel. The trees were othered with the Dutch Elm blight. Each year they were sprayed to kill the infection. The trees on Main Street lasted until the 1938 hurricane and later in 1940 when Main Street was widened.

The most impressive building in town was the courthouse built in 1804. In front of the courthouse was the town pump with its wooden trough for watering horses, also the Eldredge Memorial drinking fountain. In 1945 standing on the courthouse front lawn I watched the fire department fight a large fire in the Odd Fellow Hall. The fire was located on the fourth floor. The volunteer fire department did an outstanding job of fire extinguishing at the risk of several firemen’s lives. If the fire had not been contained much of downtown’s Main Street would have been lost due to the closeness of the buildings. The Odd Fellows Hall was totally destroyed.

When entering the town from the north the first building that you see is the Varnum Armory. This is a red brick building built in Medieval style. It had two black Civil War Rodman cannons made of cast iron and weighed 8,465 pounds each. Children loved to play on them. During World War II they were given up to the war effort scrap drive. The Varnum Armory was used for many functions. The one that I remember the most was the Christmas party sponsored by American Legion Post #15. The children all sang Christmas songs, Santa came and the kids went wild, he had a present for every child and when leaving everyone got a bag of hard candy. Directly across the street from the Armory on Main and Division Street was Dan Brown’s house built in 1749. It was razed in 1935 to make way for the new Post Office. The Post Office was an example of early 20th century architecture. The old East Greenwich Town Hall with one of Main Street’s Dutch Elms that used to line the street. The building was torn down in the 1960s to make way for a parking lot. Credit: EGHPS

The second most impressive building in town was the two-story old Queen Anne-style Victorian Town Hall with the 70-foot clock and bell tower. There was a huge Dutch Elm just to the right of the front door. Located in the Town Hall was the police department and a small jail. The police department was made up of two men: Chief Harold Benson and his assistant Charles Johnson. They had one police car that they shared. Being a small town in the 1930s with a population of 3,666, the two policemen knew about everyone in town, they knew most of the children too. The Town Hall was razed in 1964 to make way for a parking lot.

The center for entertainment for most of the town citizens was the East Greenwich Theater. Every Wednesday night was Dish Night. When the movie was over you were given a Willow pattern dish. Everyone in town had the same set of dishes. On Saturday all the kids in town flocked to the movie. It cost 9 cents for children and 17 cents for adults. On Saturday there was a short serial, almost always a Western. The western hero cowboys were Tom Mix, Buck Jones. Tim Mccoy and Lash LaRue. Then the Pathay News that always was at least a week or more old, previews and the main feature. If there were to be a Shirley Temple movie the movie patrons would line up two or more blocks long. The lead young male actor was Mickey Rooney.

The only brick house on Main Street was named the Brick House at the corner of Long Street, a Georgian building from 1767. There were several classic houses on Main Street that I remember well but are long gone, they are the following: The house south of the Town Hall owned by Benjamin Greene, built in 1757 was razed in 1938 to make way for the Woolworth Five & Ten Store. The other Benjamin Green house on the corner of Main and London Street built in 1712 was razed to make way for a gas station, The Joseph Green House “Stirling Castle” at the corner of Main and Pierce Street, built in 1776 was razed for a parking lot. Most of the town’s grocery stores were located on Main Street. Only two delivered groceries. When you went to the store you gave your order to a clerk behind the counter. He would go to the shelves to get your requested item. 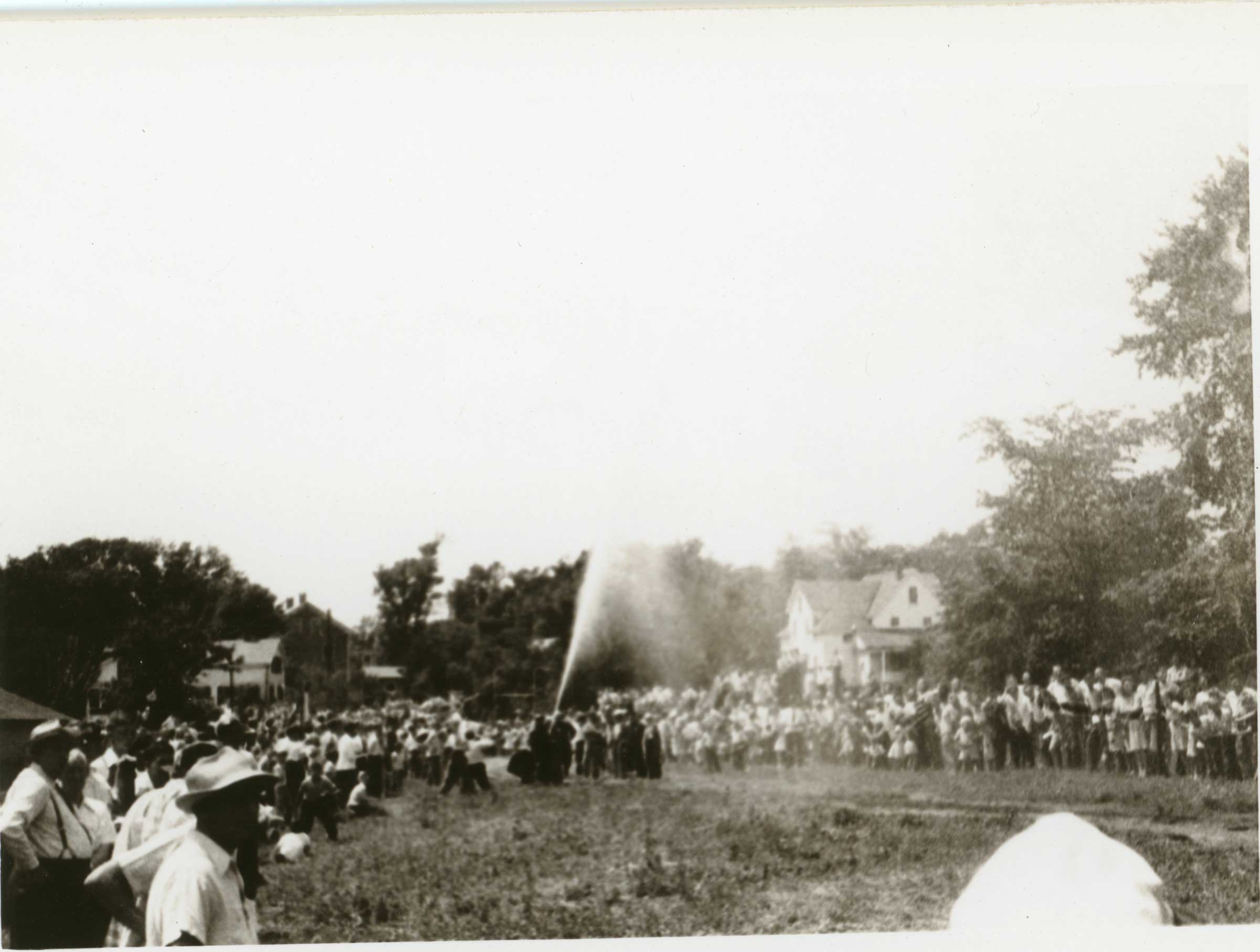 Fire Muster in action at Academy Field circa 1945. Credit: EGHPS

One of the most popular places for men to visit on Main Street was the fire house. The fire station was all volunteer. Many of them worked on Main Street in the stores. If the siren went off they had permission to leave their jobs to fight the fire. During the war when most of the men were in the service the department was manned by a group of high school students and junior volunteer firemen. They helped save the day. If we were called upon to fight a forest fire the state paid us 17 cents per hour. If our parents knew how dangerous these fires were they wouldn’t have let us go. Everyone always returned to the station safely. Some of the fire trucks were about 50 years old but looked and acted like new. The department took much pride in its old hand pumper. Once a year they would enter it in a muster. It was some sight to see 4 to 6 firemen on each side of the Tub pumping like mad. They held the record for water pumped at 253 feet 6 inches. Almost the length of a football field. As a matter of fact this was done on the East Greenwich Academy field.

There were several barbers who had shops on Main Street. Sam Baldino, Leo Petteruti and Gus Miller. Gus Miller’s shop was in the Masonic Building on the second floor, he cut hair by appointments and charged 30 cents and always gave 5 cents back to his youthful customers. He also was the first barber to have Comic Books for the kids to look at. Mr Petteruti had the spicey police gazettes to look at. There was one other barber that we called The Brazilian. There were several favorite places that the school students favored on Main Street. One of the most popular places was “The Oriole Candy Kitchen” located at The Kent House Hotel at 254 Main Street, run by Tom Papadopoulas. Everyone liked this place since it had booths. It was a nice place to bring your lady friend. The other favorite place that had booths was Earnshaws.

For the younger students, Annie Turk had a candy store on the corner of Maine and London Street. She did a good business selling penny candy. She was known as “Old Lady Turk” by her male customers, but never to her face. Everyone loved her. Next to her candy store was the “Elm Saloon,” The saloon had two swing doors at its entrance. Passing by after school we would look in under the doors and see men standing at the bar. The thing that we also noticed were the polished brass spittoons. Sometimes we would challenge one of our group to go to the door and yell, “Dad, Mother wants you to come home” – we would all make a quick getaway. Koches Drug Store and the East Greenwich Dairy were also very popular. With the Academy students the Beanery Coffee Shop was their hangout. The hangout for the high school boys was Hathaway’s Music Store established in 1935, next to the theater. You could get a “Coffee Cabinet” there for 15 cents. There was a blacksmith across the street from Mrs. Turks Candy Store run by Peter McKone. It was an education to watch him work with the red hot iron. Just a short distance from the blacksmith shop was Jacob Kaufman’s junk yard and second hand store. He would pay us 30 cents for 100 pounds of iron or paper. Times were hard and kids always needed money for the movies or a piece of candy. One other way we collected enough money to go to the movies was to collect Coca Cola bottles and cash them in for the 2 cent deposit. A quart bottle from the East Greenwich Dairy would cash out at 5 cents.

There were two prominent businessmen in town that everyone liked. They were both owners of clothing and apparel stores. It was rumored that they were the ones that had tons of fuel coal delivered to the very needy in town. They also saw that every Boy Scout that couldn’t afford to go to the one week summer camp at Camp Yawgoog got to go. They were also provided scout uniforms. Needless to say in the ‘30s and early ‘40s a lot of people were having a hard time paying their bills. With the advent of World War II things changed and people started to prosper.

Glenn King grew up in East Greenwich and lives in Tennessee. We will be running more of Glenn’s Old East Greenwich columns in coming weeks. Find the first one HERE.