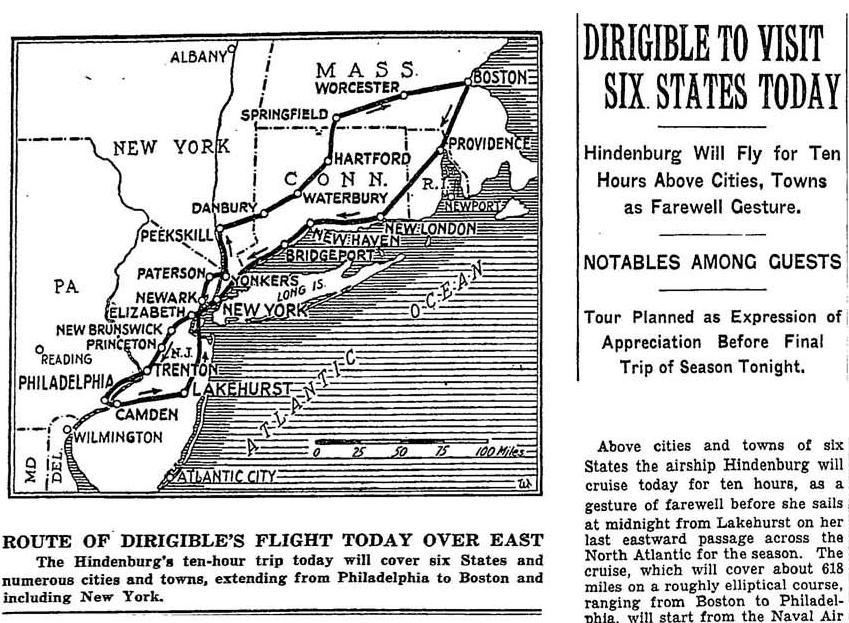 Above: The New York Times published this map on On Oct. 9, 1936, showing the Hindenburg’s path that day. The Hindenburg made several trips between Europe and the U.S. in 1936 and 1937.

I have two memories of East Greenwich that are so pronounced that I can remember the exact date of each one. The first memory is early in the afternoon at Eldredge School on May 6, 1937. The school principal Mr. Porta Shirley arranged for a fire drill to have us all assemble in front of the school on the large playground side. When we were all assembled, he climbed up the stairs to address the student body. He said that he had brought us outside to see a once-in-a-lifetime sight (WOW – that was an understatement!). He asked us to all turn and look at the Northeast part of the playground. He looked at his watch and asked us to cup our ears and listen. Soon we heard the loud roar of engines. Then, appearing directly over the playground at a very low altitude, came the German airship Hindenburg slowly gliding past. The airship had large German letters on the side spelling out “Hindenburg.” Painted on the tail fins was the red and black German flag with the swastika. This airship was 804 feet long, almost the length of three football fields. A few hours after we viewed this beautiful aircraft it crashed and burned when trying to make a landing at the Lakehurst Naval Station in New Jersey. 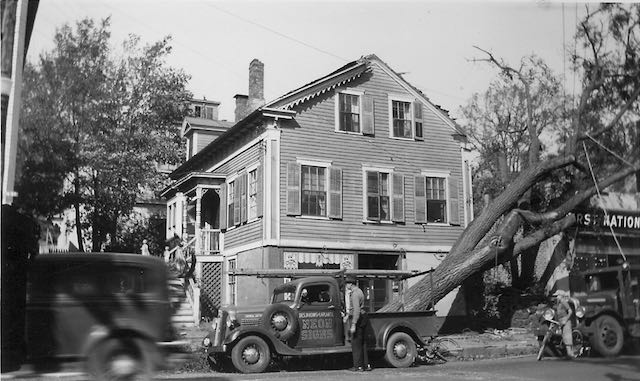 The elm tree that fell in front of the First National Grocery store on Main Street. Pendulum archives, courtesy of Alan Clarke.

My second major memory of East Greenwich was when I was a student at Eldredge School on Sept. 21, 1938. That was the day the Great Hurricane that came straight up Narragansett Bay. Most people thought it was a very strong Nor’easter. At about noon the wind was so strong that the school’s two flags were flying straight out. At about 1 o’clock parents began arriving to take their children home. About this time some of the windows and doors were blown out.

My mother came to get me and my sister. We leaned into the wind all the way home climbing over blown over trees and power line wires. It was very difficult keeping your footing. When the full storm peaked at about 4:30 p.m. the wind had gusted to 186 miles per hour then the wind gauge broke. The ocean waves were 40 feet and the tidal surge was 17 feet – exaggerated by a full moon. The storm swallowed up the coast line. Westerly lost 600 beach cottages. They were all washed out to sea. Scalloptown was all but washed away. At the peak of the hurricane it rained 8 inches in 4 hours for a total of 10 to 17 inches in all. In downtown Providence the water rose to the roofline of the street cars parked in front of the Biltmore Hotel. It has been said that this was the strongest storm in 300 years. There were 390 deaths in Rhode Island. Many of the Dutch elm trees on Main Street were blown down, one landed in the center of the First National Grocery Store. The hurricane did have one positive effect however, it helped bring us out of the Depression by providing labor for clean up, repair and building. The going pay was just $2 per day.