It’s been quite a journey for the Greenwich Odeum (nee The Greenwich Theater) on Main Street. After reopening in 2013 with significant renovations to the theater itself, the focus turned to the lobby area, including adding a bar and new bathrooms. Last year the theater added a small elevator. The result has been a vibrant space for live music ranging from rock, folk, classical, big band, and flamenco as well as a venue for comedians and screenings of movie classics.

Now, the Odeum is closing in on its fundraising goal of renovating the upstairs of the theater, including adding 80 seats to a brand new balcony, with two events this spring.

Those new 80 seats? According to board member and fundraising chair Kevin Muoio, that could make a huge difference. The Odeum, with only 410 seats, is a small jewel of a theater compared with Providence venues the Columbus Theater (800 seats) and the Strand 1,000). 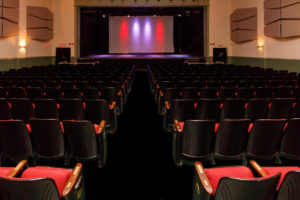 “We really, really believe that this will be a turning point for the theater,” said Muoio in a recent interview. “We’ve had nine sold-out shows in 2019 already. That’s nine times we could have sold seats upstairs.”

To date, the Greenwich Odeum’s “Restore the Second Floor” campaign has raised $470,000 from individuals, the R.I. Council of the Arts and the Champlin Foundations. Their goal is $600,000.

For their upcoming fundraiser Thursday through Sunday, April 25-28, the theater will be taken over by Mystery Science Expo 3000, the TV cult classic that was recently picked up by Netflix. The premise is simple: comedians gather to watch a bad movie together and comment throughout. The series was created by Joel Hodgson and he and Mary Jo Pehl will be hosting some old episodes as well as conducting a “Creativity Workshop” on Saturday.

“It’s going to be like Woodstock for Mystery Science Expo 3000 fans,” Muoio said. So far, people are coming from as far as California, Oregon and Florida to attend.

On Saturday, May 11, the Odeum hosts another fundraiser to benefit the “Restore the Second Floor” campaign: Little Rhody: Local Bands and Local Brews.

“We want the upstairs lounge to reproduce the looks of the downstairs,” Muoio said. “We can’t reproduce that until we get as close to $600,000 as possible.”

Not part of this most recent fundraising effort, but an exciting addition nonetheless, the theater is getting curtains for the front of the stage in June.

“They will look beautiful and they will help with the sound too,” Muoio said, explaining that the sound tended to bounce off the back firewall. “Dense curtains up there closer to the artists will absorb a lot more.”

For more information about the theater, upcoming events and how to volunteer and/or contribute, click here.

Editor’s note: The Greenwich Odeum is a sponsor of East Greenwich News.