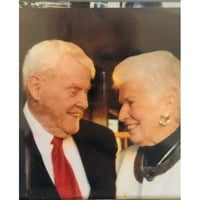 William Everett Lundberg, 96, passed away surrounded by his family on January 6, 2020. As his loving wife of 68 years, Margaret Lundberg, 91, kissed him for a final goodbye, she suffered an aneurysm and her spirit passed within minutes. Margaret passed away surrounded by her family on January 9. Everett and Peggy were an example of enduring love.  Anyone who knew them knew that they were always together and destined to continue their legacy of love into eternity.

Everett and Peggy were both born in East Greenwich. They met when she was 17 and he was 22. They were at the Greenwich Theater in East Greenwich (now the Odeum) with friends when he reached over and took her hand. She often said, “After that, nothing was ever the same.” Their love story spanned 74 years.

Everett was a quiet, unassuming man. He was fiercely loyal, loving, reliable, trustworthy, and always kept his word. He was a scholar and an athlete. He was proud to have served in the Navy during WWII aboard the USS Champlain and he never tired of reading books about that era. He graduated from the University of Rhode Island and was a member of Theta Chi.

Everett was a control branch manager for GMAC where he worked for 37 years. He was a quiet leader who was revered by his staff for his kindness, confidence and integrity. He was a member of the First Evangelical Lutheran Church of East Greenwich where he was known as Everett the Elder. He retired from his volunteer position managing the cemetery at age 90. He retired from golf at age 92. He never retired from finishing the crossword puzzle daily.

Peggy always lit up a room. She was outgoing, loving, and fun. She followed Everett in his career to seven cities, creating a beautiful home each time, and made lifelong friendships wherever they went. She loved to entertain, dance, travel, and spend time with her extended family. For 27 years, she organized a mother/daughter weekend trip to New York City with her two sisters, Cathleen and Joan, and all of the daughters. Unforgettable memories were made on those trips.

They leave their loving daughters, Carol Lewis of West Palm Beach, Fla., and Karen Manning and her husband, Thomas Manning, of North Kingstown, and their son, John Lundberg of Lake Worth, Fla. They also leave their beloved grandchildren, Luke Lewis and his wife Caitlin Lewis of Tallahassee, Fla., Katharine Lewis of Chicago, and their great grandchildren, Ridleigh, Harper, Cora and Baby August, born Dec 19, 2019.